Kat Kissick doesn't shy away from vivid hues in her vibrant works of art. 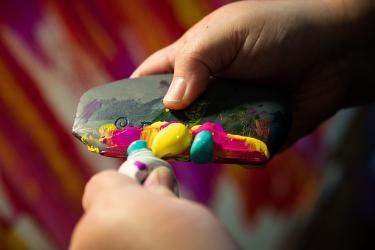 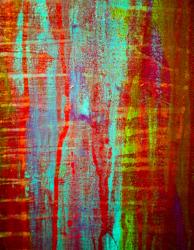 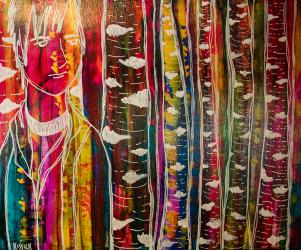 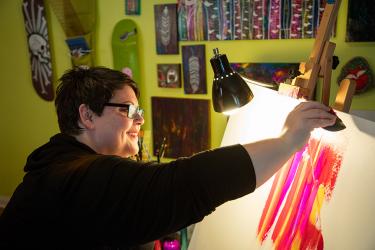 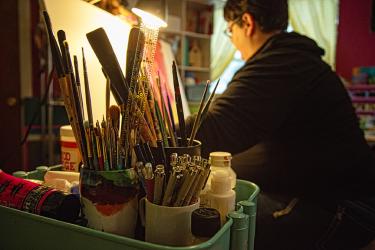 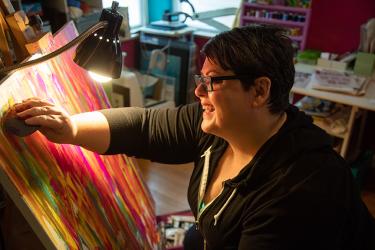 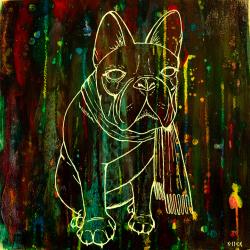 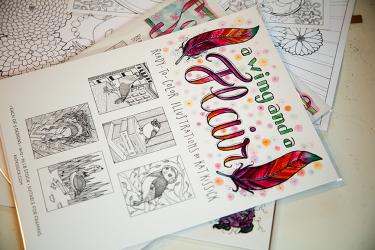 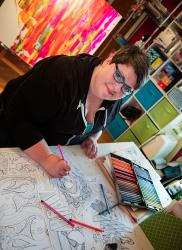 Kat Kissick painting is a roar of color that wakes you up and draws you in. Vibrant acrylic paints and markers are layered on wooden panels – and, sometimes, skate board decks – then carefully edited away in a process Kissick calls “create and destroy.” Her subjects aren’t so much painted as they are revealed, with stories that pivot from whimsical to wary. The occasional white line lends contrast, but Kissick is clear that she doesn’t work with neutrals: “My art is for people who understand color and let it speak to them,” Kissick says. “I don’t use white and black...except for illustrations.”

Yes, when she’s not reveling in vivid hues, Kissick illustrates prints, non-traditional Christmas cards and coloring pages for adults. The coloring pages are intricate depictions of flowers, birds and goth skeletons that encourage others to reconnect with their own creativity.

Kissick’s prolificacy is admirable, particularly since she started working as a professional artist less than three years ago. As a child she imagined becoming an artist one day, but she didn’t attend art school because she was unhappy with her high school portfolio. “I ignored my passion for art,” Kissick says. “Instead, I expressed my creativity through crafts. I was a hard-core quilter.”

But in the fall of 2013, when a cancer scare and major surgery forced Kissick into a six-week recuperation, Kissick illustrated a fictional account of her illness to process her feelings. Those illustrations turned into her first show, a one-night event at the SOHA Studio and Gallery, where Kissick raised money for Planned Parenthood. Today, she continues to donate her time and art to support philanthropic events like the Blooming Artist project, the Art of PAWS (Pets Are Wonderful Support) and Wall Ball.

Kissick displays her art on social media, finding buyers as far away as the UK through Twitter (@snackfancy), Instagram (katkissick) and Facebook. Kissick’s coloring pages are available at ArtMart, Etsy and at events like her Cocktails and Coloring party held at The Purple Martin in the Fox Park neighborhood earlier this year.