Blurring the lines between indoors and outdoors, Carol and Steve Higgins create a stunning garden with significantly different views. 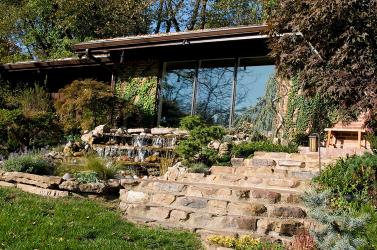 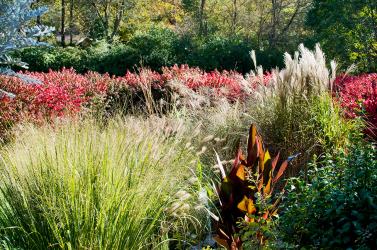 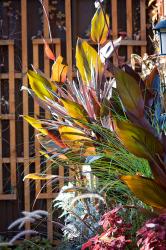 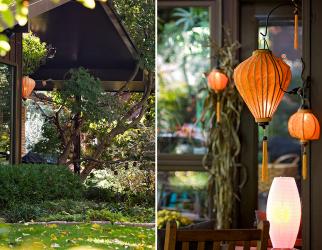 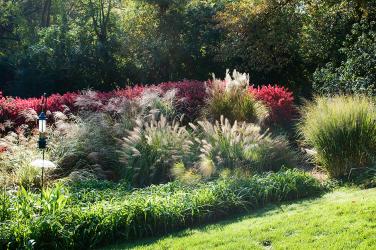 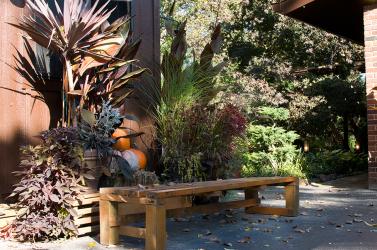 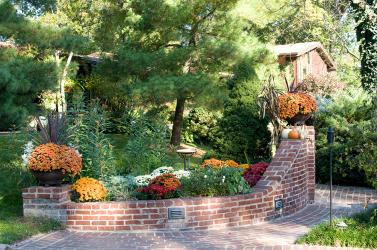 There should be no mystery as to what inspires the stunning garden that surrounds Carol and Steve Higgins's Ladue home. The clues are everywhere.

Travel down a long driveway and cross a small bridge. Arrive at gently curved brick walls flanking a beckoning brick walk. Containers and garden beds filled with seasonal mums and the last of summer’s butterfly weed soften the wall and walk. They also hint that there is much more to come. Start down the walk to the contemporary, split-level home and hear the sound of bubbling water on your right. The murmur emanates from a small pond almost totally obscured by a variety of tassel-topped grasses and scarlet burning bush.

The natural, woodsy setting opens to a lush green vista provided by over an acre of sloping lawn ending at a small creek. Topping the slope are the house and a three-tiered waterfall that seems to spill from the house itself. Japanese maples and dwarf conifers tie the rocks and glistening water to the landscape.

Once inside the Higgins’s front door, the key to their landscape design is obvious. Just to the left is the dining room, lined with floor-to-ceiling windows that provide full view of that broad waterfall. Sit down at the table and be almost certain that if you moved your toes just slightly you could dip them in that cool, splashing water.  The front waterfall, designed by Chris Graham of Conroy Lawn and Landscaping and one of the most recent additions to the Higgins’s garden, is something the couple treasures all year long. “When it is snowing in January, the view is just beautiful,” Carol notes. “The whole idea of the landscaping is to confuse what is inside and what is outside.”

“The most important thing outdoors,” Steve adds, expanding the couple’s gardening philosophy, “is that there are places to sit, and each place has a significantly different view.”

Some garden spots, such as the one on the north side of the house with multiple tables and chairs and a view of a grotto-like stone waterfall cut into a hillside, is meant as an area to visit with family and friends. Others places, such as a spot near the top of the waterfall by the front door, there is only a small bench for two. It is a destination meant for Steve and Carol when they pour a glass of wine in the late afternoon or early evening and “move from chair to chair” taking stock of what they have created and what needs to be done next.

For Carol, who has a background in computer technology, and Steve, who is a lawyer, the garden is very much a joint project. Their love of gardening began with their first home in the Central West End and a 75x50-foot courtyard. The couple worked with landscape architect Matt Moynihan to “pack a lot into a little space.” The project was so successful the Higgins’s garden was featured in Better Homes and Gardens magazine. “Matt taught us so much,” Steve recalls. “We learned about plant selection, design and perspective.”

After 25 years, the couple moved to a condo with a 20x12-foot garden plot. Within three years “we decided we weren’t going to make it” with only that small space in which to plant, Steve says with a laugh. While their new one-plus-acre landscape might seem like a bit of over reaction, their actual planting area is limited by the fact that the huge, sloping lawn ending at Deer Creek is jointly owned with a next-door neighbor and restricted to its current use.

When the couple moved in 12 years ago, they inherited established walkways but not much else. Euonymus dominated what few garden beds existed, and there were significant stands of bush honeysuckle. They also discovered that during rainy periods, water from nearby, uphill properties drained into their yard. Once they cleared the area and created a gravel-filled French drain along the back of the property, Steve and Carol began designing garden beds. They did research and made sure to plant only shrubs and trees that didn’t mind wet feet in the area of the French drain. Overall, they paid careful attention to not only how the beds would look from the walkways, but also how they would be viewed through the home’s numerous windows.

Dwarf conifers for their year-round interest and Japanese maples for their multiple foliage colors and architectural beauty became favorite plants. So did hydrangeas, due to their impact-producing flowers that change color as the seasons progress. Red twig dogwoods, with their vibrant color even in winter, are also high on their list. Favorite nurseries to search for impact-producing plants include Bowood Farms in the Central West End, owned by family friends the McPheeters, and SummerWinds in Ellisville, where nursery head Mike Curran makes a two-week trip to the Pacific Northwest every year to search for interesting trees and shrubs.

Containers, 45 of them by current count, also play an important part in the couple’s landscaping.  Carol turns the planting of them over to Steve, who she says, has a much better sense of color. To save labor and protect their backs, Steve and Carol work with inexpensive, lightweight plastic pots that can be inserted into large ceramic and stone containers in the garden. Each fall, the plastic pots go inside to over-winter in a moderately heated, multi-shelved garden shed and portable greenhouse next to the shed.

Their current garden, Carol and Steve have discovered, offers advantages their two previous gardens never could. Due to the nearby creek and groundcover, wildlife abounds. So far the couple has sighted foxes, coyotes, muskrats, groundhogs and a barred owl. Fortunately, they have viewed no garden-munching deer. Due to the constantly flowing water and many bird feeders, the different species of birds are too numerous to count. Just by sitting in their glass-enclosed breakfast room, “our three grandchildren can recognize and name several different birds,” Carol says with just a hint of pride in her voice.