A Garden of Rooms

A Lafayette Square garden has carved out room-like spaces making for a quiet oasis in the midst of the city. 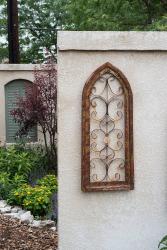 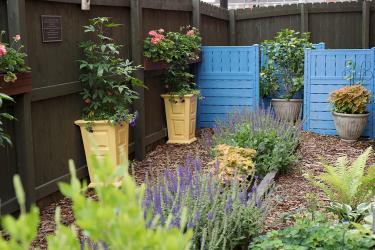 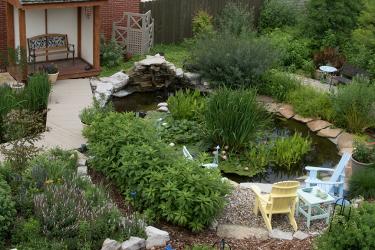 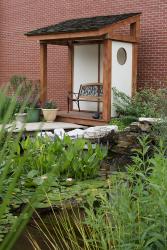 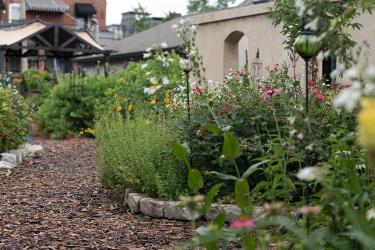 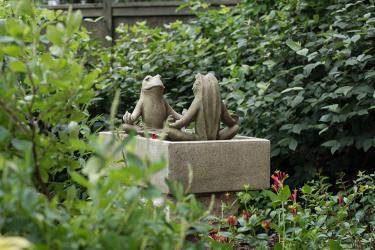 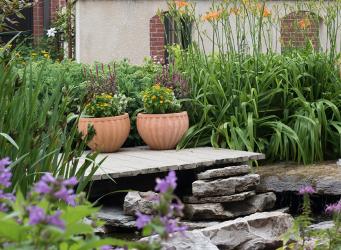 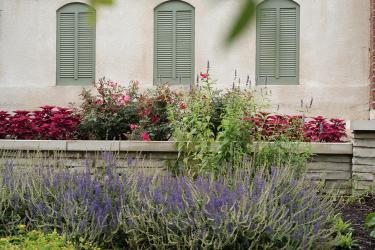 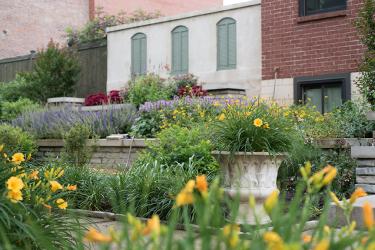 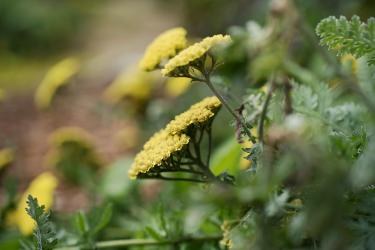 Four years ago when Mark Kalk set out to create the garden that would surround his Lafayette Square home, he found himself between a rock and a hard place. Literally. He and his partner Mark Lammert had just purchased four parcels of empty land grouped together to create a .3-acre site. On that space they planned to design and construct a new home in the style of the surrounding historic homes and a garden that would complement the beauty of the house. Following in the footsteps of both his father and grandfather, who were avid gardeners, the landscaping of the property fell to Mark Kalk. He recently had retired from the biology and life sciences department of Washington University and was an active Master Gardener.

Eager to get started, he began work on the garden while the home still was being built. The digging was not quite what he bargained for. “Years ago, when they demolished homes,” he explains, “they knocked down the walls and let everything fall into the middle. In time, weeds and vines grew over everything.”

That meant every shovel that went into the ground brought out more pieces of old brick than decent soil. He also turned up lots of old bottles, the hood of a car, old pieces of clothing and, miraculously, a totally intact pack of cigarettes. Then, there were the huge foundation stones that required a crowbar to wedge them out of the earth. He rolled those to a corner of the property to be repurposed and later line many garden pathways. Bringing in new soil and amending what soil remained became a top priority.

Mark’s master plan included a stream and pond and numerous room-like garden spaces to provide different ways to enjoy the landscape. To enhance those spaces he hoped to concentrate on perennials, most of them Missouri natives that were adept at surviving in what Mark calls “our nutty climate. Those plans have mostly worked out,” he says.

Several of the garden spaces became part of the home construction. The design of the greenhouse-like conservatory off the back of the house, which also is set up with a large table to act as an extra dining room, was inspired by the historic Linnean (green) House at the Missouri Botanical Garden. A stucco-walled outdoor dining room, off of the living room, has the ambiance of a Spanish courtyard and was inspired somewhat by the Mediterranean garden in the Botanical Garden’s Temperate House. A small, walled, private space, directly off the home’s library, has only one chair and is meant for quiet contemplation. A shady, walled space on the opposite side of the house, accented with clematis vines and hostas, has been termed the “dog memorial garden” and includes plaques honoring much-loved pets.

A curtained gazebo, just off the conservatory, offers a second outdoor dining room and can be lit at night by a candle-filled chandelier. Then, there are the numerous spots around the pond for relaxing and looking at the water. Several beckon with colorful chairs and bright pots of flowers and greenery. And finally, at the back of the property, raised beds offer up a collection of vegetables and herbs. Gravel and mulched paths provide navigation routes through the landscape and a way for a visitor to take it all in.

Knowing his limits, Mark brought in a bulldozer to do the pond excavation and assist with the moving of the bolder-sized stones that became the footing for the bridges and waterfall. ‘’If the stones fell somewhere and were stable, it was great. We left them where they fell and worked with that,” Mark says with a laugh.  The overall design and depth of the pond is tilted slightly to allow it to overflow into a rain garden if the water in the pond gets too high. “We usually don’t have to water the rain garden until August,” he notes.

While Mark was certain as to what he wanted in terms of garden rooms, he was open to a variety of natives and perennials. “I just knew I wanted something tall here and a lot of color there,” he explains, motioning around the garden. “It took the first two to three years of the garden’s existence for the plants to become established,” he adds. He estimates that around 100 different plants are incorporated into the garden.

Current favorite plants include spring-flowering Baptesia australis with their tall, gray-green foliage and indigo, sweet pea-like blossoms; Joe Pye weed (Eutrochium) with tall, lance-leaf foliage and clusters of pinkish purple flowers from midsummer through early fall that are a favorite with butterflies, and Agastache, a relative of mint, which grows 4-6 feet tall and features spike-like greenish yellow blossoms from July through September and is loved by bees and butterflies.

A gated, stockade-like privacy fence surrounding the entire garden helps create a quiet oasis in the midst of the city. But that doesn’t mean the garden’s exuberance doesn’t spill outside to be shared with anyone walking or driving by.  In front of the brick house, a series of rock-walled terraces and planters overflow with reblooming, gold Stella D‘Oro daylilies, purple-flowered betony, spires of blue/purple salvia and a tumble of yellow coreopsis. The stucco walls of the garden’s Mediterranean courtyard, accented with shuttered windows, is clearly visible.  Beyond the more formal terrace, a mulched path, accented with daisies, leads up a slight hill to a gate in the stockade fence and the pond and garden beyond.

No matter on which side of the garden gate, viewers need a few minutes to take in the expanse of plants and color. For Mark Lammert coming home and just looking at the pond and surrounding garden is a way of "relaxing right away." For Mark Kalk, it is a lush, living, technicolor embodiment of his hard work and planning. But no matter how lovely and relaxing, Mark Kalk is still the personification of the maxim "a gardener's work is never done." I always find something else I want to do," he says with a sllightly embarrassed smile.