A St. Louis staple for decades, The Restaurant at the Cheshire is blending old and new through a seasonally inspired menu. 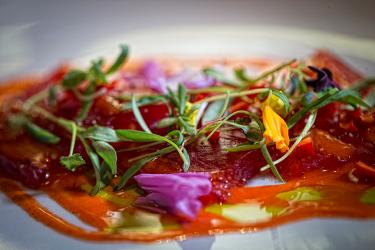 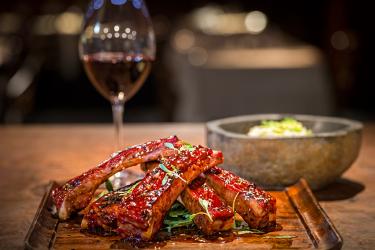 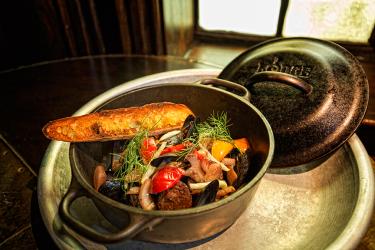 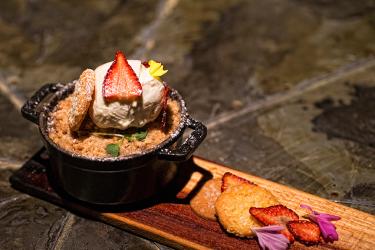 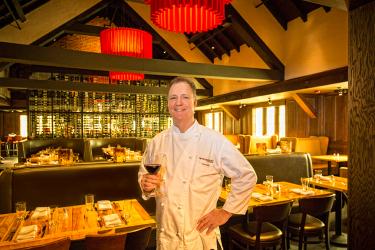 From the outside, the Cheshire looks like an inn transported from an English village to a busy stretch of Clayton Road. Open the door to The Restaurant, though, and you’ll find far more than typical English fare.

The décor and the food both draw from old and new. In the dining room, stained-glass windows and a wood-burning fireplace are original to the building, which dates to the 1930s. Updated touches include a floor-to-ceiling, climate-controlled glass wine wall and pleated, red light shades that were installed during a renovation two years ago. “What the menu has become is an amalgam of traditional American foods, new American foods and traditional English foods,” says Rex Hale, corporate executive chef for LHM International, which bought the Cheshire in 2010.  You might find spit-roasted chicken, pork belly with white cheddar grits and fish and chips on the menu. Grilled prime rib with Yorkshire pudding is a longtime favorite, but today the beef is locally raised, from Rain Crow Ranch near Doniphan, MO.  “We do farm-to-table, seasonal food,” says Hale, who serves as executive chef of the Cheshire complex, overseeing The Restaurant along with Basso, a subterranean, Italian-accented gastro pub, and Fox and Hounds tavern. Serving local foods is easier in some seasons than others, of course, but even in the dead of winter he sources tomatoes that are grown in a local greenhouse and greens from EarthDance Farms in Ferguson.

Smoked Pork Ribs with Asian Barbecue Glaze: Hale brines and smokes spare ribs, then glazes them with a mixture of garlic, ginger, hoisin sauce, sweet chili sauce and toasted sesame oil. He tops the ribs with sesame seeds and cilantro and serves them with basmati rice.

Rhubarb Crisp with Buttermilk Orange Ice Cream: Tart rhubarb is sweetened with sugar and flavored with hints of orange, cinnamon, ginger and vanilla. The streusel topping is easy to make: Hale pulses butter, oats and sugar in a food processor, adding pecans if desired.