Inspired by the Bernoudy style of their contemporary home, Creve Coeur residents use native plantings to create one of the best landscapes in the city. 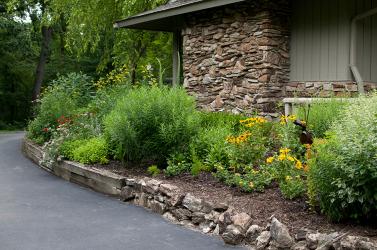 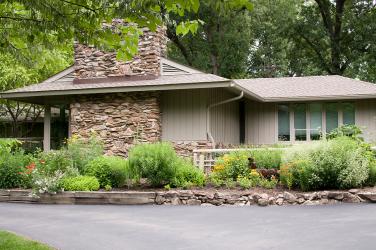 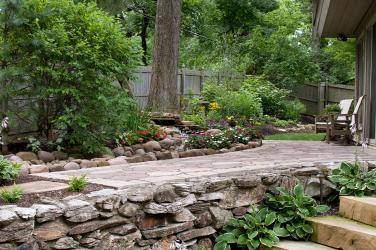 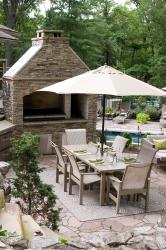 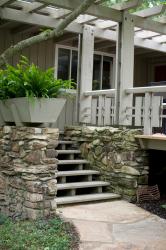 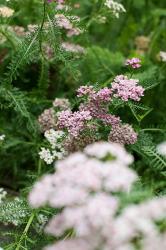 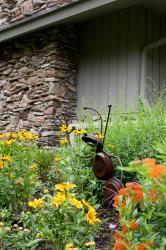 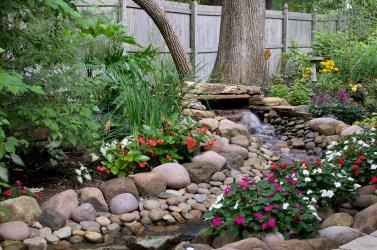 Sharon Buchanan gardens on two acres that she and her husband Larry are transforming from an out-of-control wilderness into a native Missouri showplace. Her efforts already are getting attention. Last December, Creve Coeur recognized the Buchanan garden as the best in the city.

That type of recognition should be no surprise when you learn a bit more about Sharon, who cannot remember a time when she did not love being outdoors. The love of the natural world led her to pursue a career in forestry at the University of Georgia, where her family lived at that time.

“I could just see myself in a national park riding around in a Jeep and listening to John Denver sing ‘Rocky Mountain High,’” she quips. But halfway through college, a reality check caused her to switch majors. “There weren’t any jobs available in forestry, even if you were willing to work for nothing,” she says. “I began looking around and saw that a lot of my credits would transfer into agriculture. After I finished my bachelors, I stayed at Georgia and got my masters.”

Her strategic career switch paid off. After graduation Sharon accepted a position as a sales representative for Monsanto and moved to South Carolina, where she worked with farmers who grew everything from cotton and tobacco to watermelons and Christmas trees. She moved to the home office in St. Louis in 1985, and one of her first projects was introducing the weed killer Roundup to the nonagricultural market. Then it was off to Atlanta as the Southeast sales manager and back to St. Louis in 1991. In 1992, she married Larry Buchanan, who also worked for Monsanto.

When her now college-aged children arrived, Sharon left her fulltime employment with Monsanto but continued her association with the company in customer engagement, helping customers and the general public better understand what Monsanto does.

What almost could be called a second career began in 2009, when the Buchanan family, looking for a bit more space, discovered a contemporary house for sale very near the Creve Coeur location where they already lived.  It was in the same grade-school district as their current home and came with two acres of property that included a creek. In addition, both the front porch and sunroom of the home, built in the 1950s, had been designed by famed St. Louis architect William Bernoudy, who had studied and worked with Frank Lloyd Wright. Wright, famous for the Prairie School of architecture, created homes and commercial buildings with strong horizontal lines that blended into the environment. He attempted to bring the outdoors inside through the use of multiple windows and natural building materials. Bernoudy employed the same design principles, a huge plus for Sharon. But there was a definite downside. The house and adjoining land were almost totally obscured by dead trees, bush honeysuckle and euonymus.

The Buchanan family was undaunted. They bought the house and for two years Sharon and Larry saved the mature trees they could, cleared out what was dead and cut down honeysuckle, spraying the fresh-cut stumps with…you guessed it…Roundup to prevent regrowth. The woody euonymus had to be pulled by hand.

Meanwhile, Sharon made plans for the time when the two acres could be replanted. She updated her knowledge, with an eye toward residential landscaping, by taking the Master Gardener class offered by the University of Missouri Extension Service through the Missouri Botanical Garden. She also became a Master Naturalist by taking classes offered by the Extension Service at various locations surrounding St. Louis.

While the Buchanans did what they could themselves, they turned to Frisella Nursery and Tony Frisella Jr. for the truly heavy lifting. Two things were of prime importance to Sharon, Tony relates. She wanted everything to look as natural as possible, and she wanted all the plantings to be in harmony with the Bernoudy architecture.

Up close to the house, that meant addressing a swimming pool that, as Tony explains, “looked like it was sitting in a hole” and three separate patio areas.

To bring the pool into the landscape, Tony suggested removing the existing solid-wood fence and replacing it with more open wrought-iron fencing that eventually could blend into the planting. In addition, they removed 10 feet of driveway to surround the pool with green space on all sides.

Old, broken, moss-covered flagstones were repurposed and incorporated into a charming, scented, secret garden outside the Buchanans’ daughter’s room. The real breakthrough came with the creation of a gently curved, stair-step walkway that unites all three patios. “Before you had to go through the house to get from one patio to another,” Tony explains.

The stone selected for new construction reflected the earthy colors of the stone used in the construction of the original house. The crown jewel of the project is the parilla, a huge, outdoor meat-roasting oven modeled on the ovens used in Argentina, where Larry Buchanan often travels on business.

The overall transformation of the property also involved terracing the long, steep driveway leading up to the house and preventing further erosion by creating natural run-off areas into a creek at the bottom of the two hilly acres.

With the hardscape completed, the Buchanans began the planting phase of their exterior decoration. Larry took over the task of digging a stream bed that edges the patios, bringing the splashing of recirculated water to the outdoor areas and transmitting the relaxing sound through large windows into the sunroom and master bedroom. Sharon began to select the plants to create a native paradise. Dogwoods, azaleas, native hydrangeas, beautyberry and winterberry line the long driveway up to the house. Oak, hickory, persimmon, apple, peach and pear trees went into appropriate sites. “I went through a phase where if it didn’t produce food, I wouldn’t plant it,” Sharon recalls. She is continuing to add small trees and shrubs such as serviceberries, witch hazels, red horse chestnuts, fothergillas, elderberries and sumacs to the landscape.

In keeping with the Prairie School architecture of the porch and sunroom, native prairie plants such as coneflowers, amsonia, Joe-Pye weed, yarrow and milkweed populate the sunny areas near the house. Fragrant viburnums and summersweet surround the Bernoudy front porch.

In addition to the ornamental areas, Sharon tends a vegetable garden with crops that rotate as the growing season progresses. That area also contains blackberry and raspberry bushes, as well as fruit-bearing trees. What keeps her going is the “joy of being outdoors and seeing the results of what we have done.”

She has some words of advice for fellow gardeners: “Try to grow something you can eat. Use native plants whenever you can and make sure what you plant provides food for someone. Look at gardening as a joy. Otherwise it is way too much work.”