In their new downtown headquarters, Bissinger's hosts private events in the chic Carmel Room where the executive chef serves up decadent delights with a hint of chocolate. 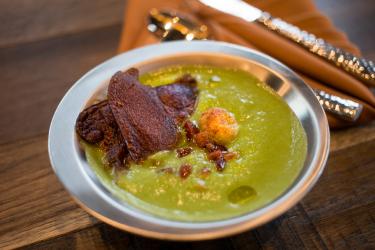 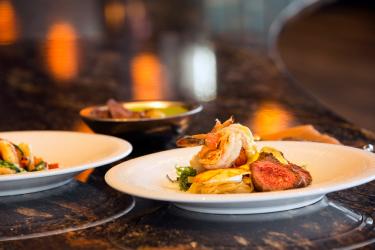 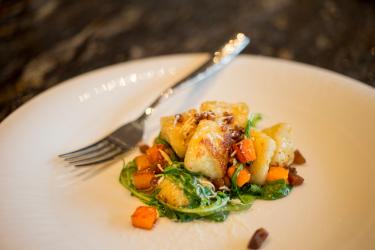 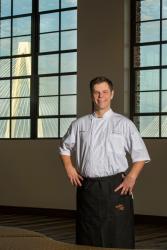 How to describe the Caramel Room, the lusciously appointed event space atop Bissinger’s new headquarters?

The scent of chocolate is in the air, but Director of Events Amanda Bradham-Little answers the question by invoking another indulgence. “It’s whiskey chic,” she says. “It’s a take on modern and contemporary, yet warm and inviting.”

Tiered lights and a brick-faced fireplace cast a golden glow over the bar and reception area, which opens into a ballroom that can seat 420 guests. A short flight of stairs leads to the rooftop terrace, which offers cozy seating clustered around fire pits and a stunning view of the new Stan Musial Veterans Memorial Bridge. The lower floors in this 100-year-old former warehouse hold the chocolatier’s production facilities and corporate offices.

“Same chef, same menus, just different spaces,” she says. Miller was the owner and executive chef at Harvest, an acclaimed restaurant in Richmond Heights that closed in June. “Amanda called me as soon as the news broke that Harvest would be closing,” he says.

He’s incorporating subtle hints of Bissinger’s chocolate into some of his savory dishes, such as white-chocolate gnocchi. “It sounds like it would be a decadent dessert,” he says. Not so: “I’m taking the Parmesan-cheese portion and substituting white chocolate. You have the flavor of the white chocolate, but not the sweetness.”

Those nuanced flavors are his hallmark. “With my food, that’s one thing you will find; it’s incredibly well balanced,” he says. “You won’t find one bite and say, ‘that’s very sweet, that’s very salty.’ In all bites, you’ll find all five aspects of taste.”