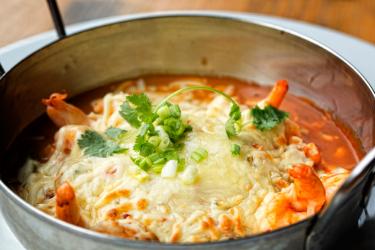 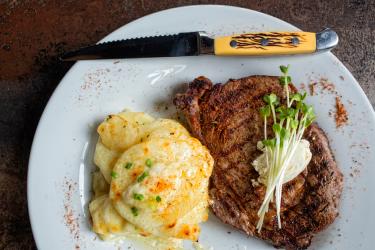 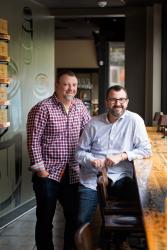 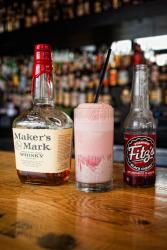 Gamlin Whiskey House combines the best of two worlds: It’s a bar offering about 300 whiskeys and a Southern-inspired steakhouse.  “We always had a dream of opening a whiskey restaurant, and we just went for it,” says Lucas Gamlin, who owns the restaurant in the Central West End with his brother Derek. They also own SubZero Vodka Bar in the Central West End, and Tahaá Twisted Tiki Bar in the Grove.

“Whiskey is really my passion, and I think yours as well, Lucas?” Derek says. “Definitely,” Lucas answers.

They visit the distillery to pick out barrels of Knob Creek, their most popular brand, and have it bottled for them. The oak barrels – six and counting, plus one from Old Forester – become part of the décor, set into the walls and on the dining-room floor.

Although the Whiskey House opened just a year ago, it’s already expanded into the space next door, allowing the Gamlins to build a second bar and creating a spot for private parties.

Choosing from hundreds of whiskeys can be a challenge, so a whiskey sommelier is on staff. Gamlin’s serves 1½- and 2½-ounce pours and offers 20 whiskey flights, each comprised of three 1½-ounce pours. A lengthy cocktail list ranges from the classics to inventive signature drinks. The “Champiskey” selections – such as Whiskey in the Morning, a blend of Seagram’s Seven Crown, orange liqueur, orange juice, lemon and champagne – are perfect for brunch, and dessert drinks hit the sweet spot.

Cooks also reach for whiskey when appropriate, brining chicken drummettes in bourbon and tossing them in a sweet bourbon sauce, for example, and accompanying seared salmon with bourbon-pineapple chutney. Whether or not the food is spiked with whiskey, everything is house-made, from pickles and preserves to bread and desserts.

Shrimp and Grits: Stone-ground grits are cooked in chicken stock and enriched with pimento cheese, pepper jack and parmesan. The shrimp is sautéed with a flavorful mix that includes bell peppers, bacon and garlic. After spooning the shrimp onto the grits, a sprinkle of shredded pepper jack and white cheddar provides the finishing touch.

Steak 101: Bailey will show how to cook a stellar steak. His Cajun “Char Crust” rib-eye, for example, is rubbed with Cajun spices and barbecue seasoning, which introduce a touch of sweetness and cut the heat.

Cherry chocolate bourbon float: Maker’s Mark, Fitz’s black-cherry soda and scoops of chocolate ice cream combine in a tribute to the Gamlins’ late father, who loved floats made with bourbon. “It’s one of the best things you’ll ever try,” Derek says.