A Garden Grown from Trust 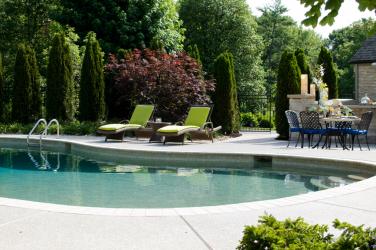 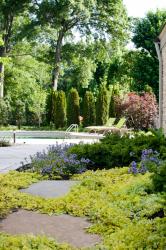 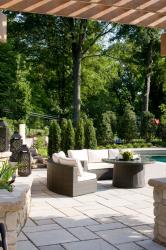 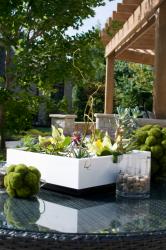 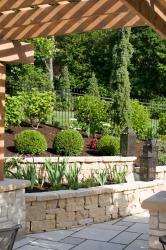 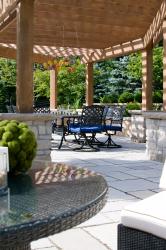 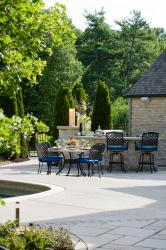 When it came to his garden, John Moore knew what he wanted. He needed a place to decompress when he left work as a certified financial planner and senior vice president at Morgan Stanley. “I’m in an office all day long,” he explains.  “ When I leave work, I want to be outdoors. And I’m fairly high strung. I want to keep moving.”

All that translated into a garden with a variety of areas in which he could move around, and also one in which he could be involved. “I talked to a number of people [landscape architects and garden designers], and we just didn’t get along,” he recalls, noting that they had trouble envisioning his ideas.

“I was out driving, and I passed Chesterfield Valley Nursery. I decided to stop in and see what they had,” he continues. “I met Jim and talked with him about what I wanted to do. We immediately hit it off.”

“Jim” is Jim Graeler, who laughingly describes himself as the general manager, designer and owner of Chesterfield Valley Nursery. When Jim stopped by John’s West County home to look at the project, they both quickly assessed that there was more than one issue involved in making the outdoor area a relaxing, rather than troubled, space.

They saw a swimming pool with a broken concrete deck, a sloped yard that caused rain water to run downhill and on the patio, and a small pergola that acted as a dam, causing water to flow entirely around it. “We had to work on the drainage before we could make it look beautiful,” Jim explains, emphasizing that in any landscape, drainage and beauty have to be totally compatible.  “You don’t want to look at any project just from a drainage standpoint or strictly from a beauty standpoint. You have to take the drainage and make it part of the landscape; take all the factors and make them work together.”

To protect the patio, there needed to be some kind of wall. But rather than constructing a single high wall that could be imposing, Jim created a two-tiered terrace that softens the barrier. In addition, cognizant of John’s desire to come home from work and relax by working in his garden, each tier encompasses a planting space that softens the hardscape even more and gives John “his space to dabble.”

Both men agree that the project involved an element of trust. “John set expectations for us, but allowed us to have some creativity,” Jim says.

“I just said, ‘Make it look good for me,’” John recalls. As things began to take shape and John saw the results, he became even more trusting and the project got bigger. “At one point when we were moving earth around, I said to Jim, ‘as long as we have the equipment, let’s just keep going,’” John relates. “I had that level of trust with him.”

Four other elements of the project emerged that kept the trust going. The first involved the layout of the various garden features including a space for grilling and a bar area, the swimming pool, a new pergola and the fire pit. “It is really important to have a flow to the garden areas and provide different areas for conversational groupings,” Jim emphasizes. “Too many people fail to address that and will put things so close together that if you are using one area, such as the grill, you are crowding another area and making it hard to use something like the fire pit.”

The second encompassed the fencing required around all swimming pools. It was important to John that the fence not be a barrier to the enjoyment of his garden. The result was a black, wrought-iron fence, set well back from the garden and disguised by a mix of evergreen shrubs including arborvitae, yew, boxwood and holly.  In addition to camouflaging the fencing, the shrubs provide a lush display of greenery in the winter landscape.

The perimeter fencing also went a long way to solving a third issue. “I wanted a landscape with a pool nestled into it, not a pool with some landscaping around it,” John emphasizes.

Lastly, the two men agreed that not only was it important that the garden look good when it was first planted, but that in years to come, the trees, shrubs and perennials literally had room to breathe.  “I want the garden to look good now, but I want it to look nicer five years from now,” Jim explains. “I want the right plant in the right space, and I don’t want them to have outgrown that space five years from now.”

For John, his garden is a delightful work in progress. His terraced planting areas contain a mix of top soil, composy and pine bark provided by Jim. Little by little over the past year he has added perennials such as daisies, cone flowers, coreopsis, salvia and heuchera. “I’m really experimenting right now to see which plants do well in which space,” he says. Where annuals are concerned, he is partial to cannas. “I spent a year and a half in Israel, where they grow lots of cannas, and I love them.” His ultimate goal is to have something blooming from March through October. Ample landscape lighting keeps the garden bright even after dark. “I want to be able to sit out here with friends and see bands of color wrapped around us,” he explains.

In addition to being able to dabble when he gets home from work, John loves to entertain and sees his garden as a place to share with family and friends. He recently hosted a fundraiser for a favorite cause in which he serves on the board, the St. Louis Learning Disabilities Association, to help cover tutoring expenses for St. Louis area families. “I had 85 people here, and it worked beautifully. I could probably increase the size to 125 people next year,” he says.

But most of all, his garden has served its number-one purpose. “From early spring until fall, I’m out here at least two hours every night,” he says happily. “It’s my therapy. It’s my sanctuary.”