A Unique stone-barn estate is refurbished from 1806. 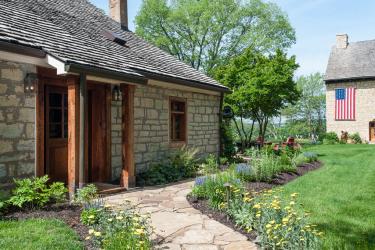 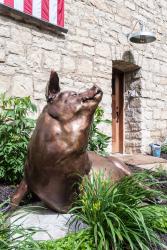 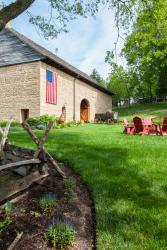 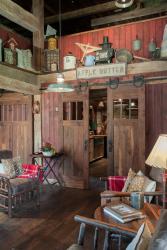 Centuries have elapsed since the first Americans settled in Missouri, in the now-quiet countryside named for its indigenous women. And, while time isn’t always kind to the people it touches, it guarded Bob Brinkmann’s dwelling, a unique stone estate connecting its inhabitants and other Osage Valley residents to their raucous, rugged and romantic pioneer past.

Take the Daniel Boone Bridge across the Missouri – that rangy, forceful thing – to the place where highways 40 and 94 collide. Wind south, deep into river country, until you reach a venerable limestone structure tucked casually between groves of walnut trees, marked by a broad Osage orange tree – “You’d know it as a hedge apple,” says Brinkmann, guessing by the plant’s size it sprouted back when frontiersman Daniel Boone frequented the land once owned by his adopted son, Jonathan Bryan.

Post-revolutionary Missouri was a dusty, dangerous place. Boone’s family and 20 others were the only settlers west of the river in 1799. Bryan built a gristmill on land received under Spanish grant, and folks camped in the valley for days with loads of corn and wheat waiting to have their crop ground at Bryan's Mill by the Beast of Burden. A home later constructed 100 feet past the mill would be repurposed into a barn when the surrounding parcel became farmland. For those first 74 years, though, “it was the place everybody congregated,” Brinkmann says, noting, “Danny Boone himself was here just about every night.”

Thanks to thoughtful renovations, the old gristmill is still a community hub. When Brinkmann and his wife purchased the Bryan property in the spring of 2012, they had their work cut out for them: “None of the columns in the barn touched the ground, it was a dirt floor that hadn’t been changed for 200 years, and there were no windows or doors in the main house – just openings,” recalls Brinkmann, CEO of Brinkmann Constructors. Brinkmann and his wife gutted the home, refurbishing it with period-savvy touches like handmade cabinetry and walnut flooring, doors and windows, apropos given the indigenous trees. The décor is equally authentic: a commissioned painting depicts rural, midcentury life, and antiques like a settle dated to 1847 conjure the past. Outside, a John Deere wagon circa 1880 animates the barn, along with hoary feed sacks and an American flag displaying 26 stars.

By October, the project was complete, and the only thing left to do was celebrate! “We raised $60,000 that night for the Katy Land Trust,” Brinkmann says. Frequent entertainers, he and his wife throw annual galas for friends, clients and employees, and host a very special tree-trimming party the Sunday after Thanksgiving when children are invited into “Santa’s workshop” to make ornaments.  The Brinkmanns love sharing the history with friends, clients and neighbors. On any given fall weekend they might “have a country band, fried chicken, mashed potatoes and green beans – maybe make some apple butter – and share the place with people that wouldn’t normally see it.”