Carrying her passion for interior design into her yard, Diane Breckenridge-Barrett designs a backyard brimming with blossoms. 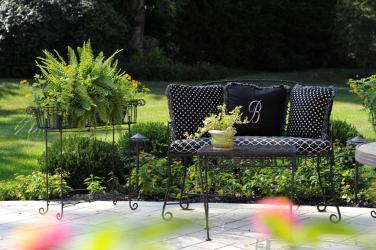 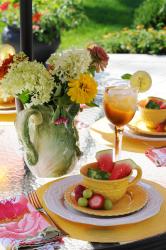 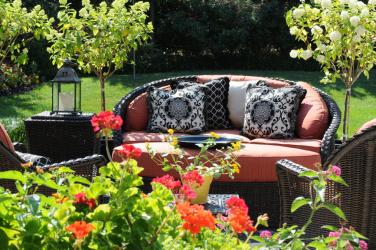 Pots of salmon-colored geraniums coordinate with the furniture and sun-loving lantanas keep the color theme going. 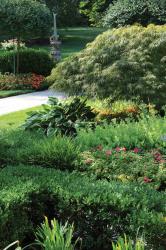 Just off the patio a shady walkway mixes the textures of a feathery, mounding Japanses maple with large leaved hosta. 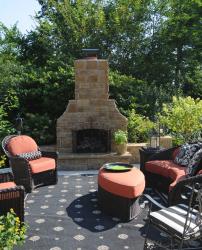 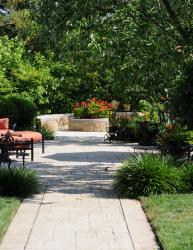 In the heat of the summer, a fire pit becomes a handy planter.

But no matter what the project, somewhere in that design you would be hard pressed not to find a bouquet of flowers. The arrangements might show up as part of a painting or a fabric detail or displayed in a fine container, but flowers there would be.

Her addiction is one she unashamedly admits to. “I have a passion for flowers,” she beams as she sits in the window-filled sunroom of her Des Peres home looking out on a patio brimming with blossoms in the form of flowering trees, overflowing pots and massed plantings.

Designing with live plants is a joy she is currently rediscovering since her marriage five years ago to Ray Barrett. She has gone from living in a glass-walled city condominium with a spectacular view of the Arch and the Mississippi River to a traditional red brick home surrounded by an acre of property. The outdoor space has been hers to design along with the interior of the home, and she has relished the task. “I’ve always had a love of gardens, flowers and the outdoors and that interest has never stopped,” she says.

In her home it is almost hard to tell where the sunroom, designed in tones of gold and salmon, stops and the patio begins. Salmon patio umbrellas and seat cushions take the eye from indoors out. Planters spill over with salmon-colored geraniums and beds and pots feature lantana in shades that vary from gold to pink to orange. Black and white cushions in varying prints tie together the black wrought iron of the patio furniture, wire baskets and indoor/outdoor rattan chairs and sofas.  “I like to dress up the patio like I would a living room,” she says.

Both Diane and Ray love to cook and entertain. They recently enlarged the patio and added an outdoor fireplace. In nice weather Diane estimates they invite family and friends for dinner at least three times per week. In typical Diane fashion, the place settings, table linens and sometimes even the food itself carries the color theme forward. But, Diane emphasizes, the house, patio and all the furnishings are meant to be enjoyed. “Between us, Ray and I have 24 grandchildren, so this is a house that’s lived in,” she says.

Beyond the patio, Diane likes to garden with masses of flowers in a single color for a bold statement. ‘Knock Out’ roses and daylilies fill entire large beds. At the back of the property masses of hydrangeas blooming at slightly different times form a cutting garden so she is never without flowers for a dining table or an end table. Diane’s plan is for something to be blooming from early spring until December. Fragrance is also an important garden component. In early spring a line of dwarf ‘Lollipop’ lilacs frame the entrance to the patio from the yard and scent the air. One month later, a Japanese tree lilac, placed where the sunroom and the patio meet, perfumes both the house and the garden.

Partnering with Diane in this gardening enterprise is horticulturist Connie Break, who with Diane’s encouragement has now formed her own company. Connie calls working with Diane in the garden a “match made in heaven.  She gets in my truck and we go down to the supplier. She knows what she wants, but she’s always open to new things. If she doesn’t like something, she’s not afraid to say it. I’m able to use my plant knowledge and along with her design skills, it’s brought so much life to the landscape,” Connie says.

Particularly important, Connie notes, are the trips they make inside the house to peer out the windows and “look for what we want to see outside and how the landscape can be pulled inside the house.”

While the backbone of the garden is in the flowering trees, shrubs and perennials, one of the most creative aspects of the landscape, both women agree, is the ability to use annuals to create a different color scheme in a few beds and around the patio each year. “I’ll say let’s do all white this year or let’s do bluish purples,” Diane explains. “One year we filled an entire patio bed with yellow marigolds. It was just beautiful.”

Another thing both women agree on and enjoy about their relationship is that both are willing to be hands-on in all aspects of the digging and planting. “I love the gardening part of it,” says Diane. “I like to do it all.”

Connie adds that she is continually amazed by Diane’s willingness and ability to  “do it all,” even to moving large, heavy pots of flowers from place to place. To Diane it is simply another way being an interior designer translates to the garden. “She told me she’s moved more furniture than most men,” Connie relates with a laugh.