These homeowners create a luscious garden full of joy. 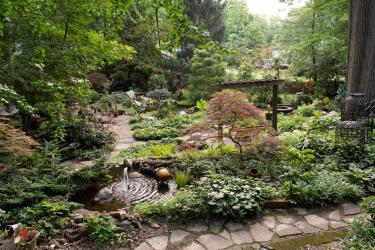 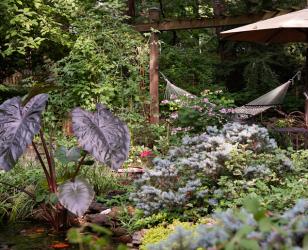 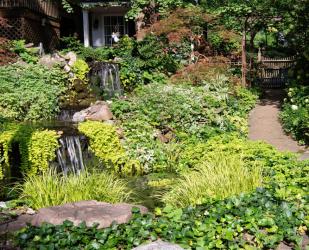 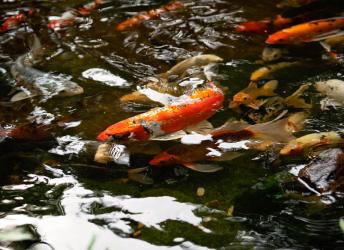 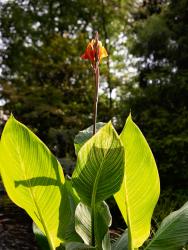 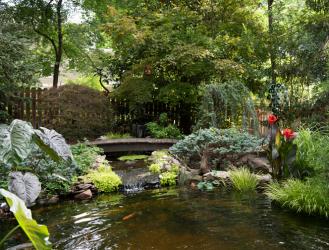 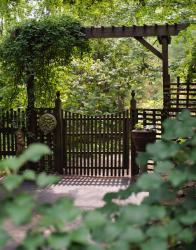 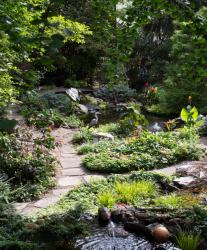 Step down into Debbie Hadley’s Webster Groves garden and be engulfed in green: the dark forest green of the towering Norway spruce, the Canadian hemlock and feathery false cypress that form the perimeter of property. Spotted throughout to provide winter interest and architectural form, deep green spreading yews, blue tinged spruces and Weeping Blue Atlas cedar add nuances to the verdant theme.

The red-tinged green of feathery Japanese maples and tufted foliage of Bonfire ornamental peach add to the symphony of shapes and textures. At ground level, spikes of ornamental grasses such as carex Ice Dance provide a contrast to the low-growing whorls of lime green pachysandra: chartreuse trailing creeping jenny and heart-shaped, dark green English ivy that cover the soil along multiple pathways.

The beauty and sound of water enhances the richness of the landscape. It flows via a two-tiered waterfall that cascades from the top of the garden and ripples in the lower-level pond that flashes with orange and golden koi.

But if you thought that the plant life and the design you see before you made the garden magic, you would be wrong. It is its history that makes this garden truly special. Debbie and Bob Hadley live in a home built in 1895 by Justin Joy as his own residence. In 1909, her great grandparents purchased the house from the home builder who made the term “Joy Built” synonymous with fine construction in turn-of-the-century Webster Groves. Her grandparents later lived in the home and in 1979 Debbie and Bob bought the house from her grandfather. Her mother was born in one of the bedrooms during the Depression.

Every time Debbie strolls through her garden, she is aware of her grandparents’ presence. A series of 80-year-old, weathered terraces still hold firm and gradually take the sloping one-acre yard from the top at the back of the house to the pond at the bottom.  In the 1940s, her grandfather, a surveyor, created the terraces by repurposing slabs of old concrete left over after he had finished creating new road projects. With the skill of an experienced stone mason, he dry-stacked the concrete to create the garden walls.  She can point out the gingko tree he planted and the hydrangeas lovingly tended by her grandmother.

In her grandparents’ time the bottom of the garden contained a tennis court used primarily for badminton, shuffleboard and as a surface for square dancing. When Debbie and Bob bought the house, they removed the concrete court and replaced it with swing sets and playground equipment for the small children enrolled in the home daycare center Debbie ran for 20 years. They also added a charming garden shed, which these days has been incorporated into and become one of the centerpieces of the garden design.

As her own three children became teenagers, Debbie noticed her interests changing. “Most of my yard was in grass. I was not interested in landscaping at all. My Grandma was a gardener and my Mom loved gardening. When I had more time on my hands, all of a sudden, I started loving plants. The landscaping bug bit me,” she recalls.

Not only did it bite her, it swallowed a serious chunk of her time. Debbie began taking a class or two offered by the horticulture program at St. Louis Community College-Meramec to increase her landscaping expertise. Before long she was enrolled in the associates degree program, running a daycare center during the day and going to school at night. “It took me three years to get my degree,” she says. With her coursework complete, Debbie changed careers and began her own landscape design and installation business, Gardening Angel Landscaping, which she ran for 15 years before retiring.

As she helped clients add interesting trees and shrubs to their landscapes, she couldn’t resist buying a plant or two for herself. “As I was getting plants for other people’s yards, I would also end up getting some for my own yard,” she says with a laugh, thinking of her overflowing garden.

The centerpiece koi pond became her first big project. Twenty years later, now surrounded with mature plants, it looks as though it came with the historic home. Twelve years ago, she added the two-tiered waterfall, which adds the flow and sound of rushing water nearer the house.

“Water features provide a place for so many beautiful plants such as water lilies and lotus,” she notes. “The sound of the water is extremely relaxing; you can just lay in a hammock, listen to the water and watch the fish.”

Plants she would not be without in her own garden are the conifers and the boxwoods and hollies that keep the garden green in winter. She particularly loves the drooping branches of weeping evergreens that add architectural interest. She also favors ornamental grasses and pachysandra, which provides ground cover and stays green in winter. She also would not be without early flowering hellebores or Lenten roses that are already “so pretty when everything else is just trying to come out of winter,” she says.

In her years of advising others and in creating her own garden, Debbie has some common-sense advice for gardeners. “If you are putting in a pond, make it as large as you have room for. Nobody ever wants a smaller pond and once it is in, you can’t make it bigger. Use a good filtration system when building the pond. If you do, you won’t have problems in the future with algae or sick fish.”

More plants die of drowning than of drought; watch over-watering.

Don’t underestimate how large a plant can get. Too many people end up with 40-foot evergreens four feet from their front door. If a plant isn’t doing well in one place, don’t be afraid to move it. Things can be moved up until the time they are four years old.

Reflecting on what drew her into gardening, “I just got hooked on plants and how excited you can get after winter seeing things come alive,” Debbie explains. “Gardening makes you feel so rewarded. There is something so peaceful about working in a garden. I’ve lived a pretty noisy life; I think I was looking for something peaceful.”

She is also hopeful she may be providing a legacy for the future and adding more family history. Not only does her husband, Bob, now retired from Toyota, assist with the garden her teenage grandchildren “help me weed and rake. I am hoping that someday, one of them will take it over.”

To those who might like to experience Debbie’s garden first hand, Debbie and Bob now operate the Hadley Garden Inn, a B&B they created in the old daycare space, which is totally separate from their house but offers full access to the garden for guests.