Newly built, beautifully detailed home reflects its owners’ love and admiration for the craftsmanship and character found in older houses. 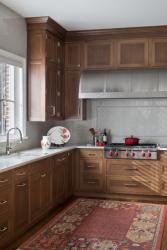 Plato Woodwork crafted the rift sawn white oak cabinets featuring a Shaker-style door with a decorative inside bead. Kathy Israel notes Plato Woodwork was founded in 1893. “I think that’s a cool concept that we used a company that could have made cabinets original to a 1920s house,” she says, noting the Georgens’ desire to honor that aesthetic. The Modern-Aire range hood of hammered stainless steel on the banding ups the drama in the warm and inviting kitchen. 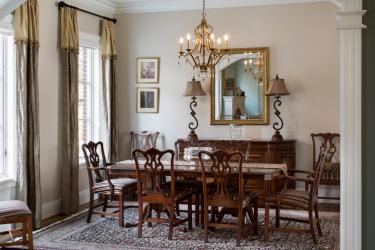 Old and new marry well in the dining room chandelier. Leaded glass crystals were removed from a broken 1930s chandelier and added to a new fixture from Wilson Lighting. “When you add the old crystals, it looks like a restored light,” says homeowner Nancy Georgen, who has owned the dining room table and chairs for decades. The sideboard is vintage Ethan Allen, while the hand-knotted rug is also from the homeowner’s collection. The solid bronze chandelier, crafted in 1928, was restored and rewired to take center stage in the traditionally minded living room. The arched fireplace mantel and surround, made of Wassmer Studios cast stone, mimics limestone. The keystone detail is carried through the archways between rooms and on the home’s exterior. Homeowner Michael Georgen crafted leaded glass windows on either side of the fireplace. 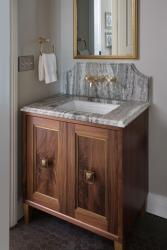 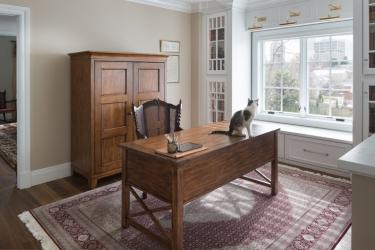 Details such as the beveled plinth block on the door trim add to the period look of the home. “It’s the little things we did to get the old house feel,” says Nancy. Hakwood European oak flooring leads to the sitting room in the primary bedroom suite. The kidney-shaped desk belonged to Nancy’s paternal grandmother. Michael Georgen crafted the Arts and Crafts-style lampshade; the lamp base is from Brody’s. This sitting room is a favorite of Nancy’s, who grew up very near her current home. “My parents had their bedroom on the second floor of our house with a little sitting room off the back of it, and the view from our sitting room is almost identical to what theirs was,” says Nancy. 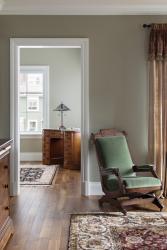 “We designed the primary bedroom suite for aging in place,” says homeowner Nancy Georgen. A doorless adjacent room can be used for an office, sitting room or even a nursery. The Victorian-era wood platform rocker with green velvet upholstery belonged to Nancy’s grandmother. The hand-knotted rug is from Ageless Rug Treasures. 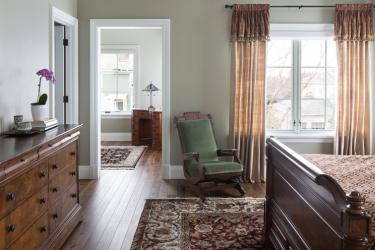 Durable, low-maintenance porcelain tile on the floor and wall mimics the look of marble. The Vaughn sconces lend an Art Deco flair to the primary bathroom. 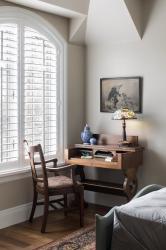 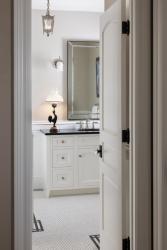 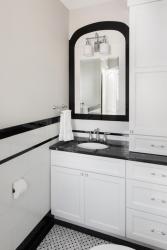 An opaque structural glass manufactured in the early 20th century, slick, shiny Vitrolite epitomizes the Art Deco and Art Moderne movements. Vitrolite tiles salvaged from a tear-down found new life in the Georgen home on the walls in an upstairs bathroom and as an arched frame bordering the mirror. Porcelain and chrome cabinet handles add to the vintage vibe. 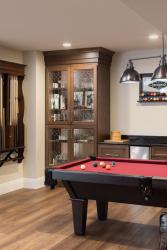 Leaded glass panels salvaged from a tear-down were repurposed as doors for built-in white oak cabinets in the billiards room. “When you have doors that are 100 years old with new cabinets, you can’t just put anything in there,” says Kathy Israel, owner of Accent on Cabinets. “We sent the door to Plato Woodwork, who made these cabinets, and they made it all work together.”  Custom pool table by A.E. Schmidt. 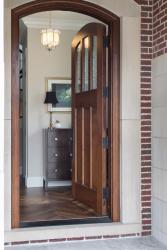 To capture the look of an older home, limestone sills and arches accent the exterior brick laid in the American bond pattern. The custom front door of rift sawn white oak and seeded glass opens to the entry foyer of Hakwood imported European oak laid in a herringbone pattern. Overhead, an etched milk glass light fixture hints at the restored lighting and other antique treasures utilized throughout the home.

Nancy Georgen recently gave a tour of her home to a client of her interior designer and friend Julie Bruns Haloftis. The client marveled at the condition of what she believed was a renovated home.  “I said, ‘it should be in great condition because it’s new,’ Nancy laughs. “People absolutely think it’s the best restored house in the city.”

Such are the reactions to Nancy and her husband Michael’s new home, which reflects their love of the traditional architecture found in older houses. The Georgens previously lived in a 2 ½-story, 100-year-old Tudor in University Hills. But as they neared retirement, they found themselves using only half the rooms in the 5,000-square-foot house. “We felt there could be a new, young family filling up that house instead of two empty-nesters rambling around in it,” the homeowners say. Putting the tuck-under garage on ground level or adding an elevator so they could get to their second-floor bedroom weren’t practical renovations if they stayed. Yet, as they contemplated building a home that would allow them to age in place, they didn’t want to give up the architectural details found in the old homes they loved so much.

With meticulous research, careful planning and the right design team, the Georgens now have a new, beautifully crafted brick-and-limestone home that blends seamlessly with its neighbors in Old Town Clayton. “It’s a new old house,” says Haloftis, owner of Relative Design. “And it has a very historical, old-home feel.”

Working with a team that included Haloftis, architect Lauren Strutman, builder Jeff Bernstein of Jeffrey Homes, and Kathy Israel, owner of Accent on Cabinets, the Georgens presented their wish list for the new home. At the top of the list was the ability to age in place, which meant a ground-level, attached garage; defined rooms but with an open flow between them; and options to turn a main-floor room into a bedroom if necessary.

A second-floor laundry, Jack-and-Jill design in the secondary bathrooms, and an elevator shaft were also on the wish-list. The elevator itself hasn’t been installed (“We wanted to walk stairs for now. They’re good for you,” says Nancy) but the option is there. Functionality was important, but the feel of the home even more so.

“They had a very specific goal to make sure the house was consistent with existing, older styles of homes,” says builder Jeff Bernstein. “She didn’t want a front-entry garage and even compromised on the width of the house, but it was important that the house looked as if it had been built years ago.”

Details such as keystone archways, leaded glass windows and plinth blocks on door trim nod to an earlier time. The Georgens and the design team were also able to repurpose and revitalize salvaged materials such as antique lights, Vitrolite tile and old cabinet doors. Some of these salvaged elements came from homes the Georgens had renovated for rental properties and that Nancy had been saving for decades.

A 1928 solid bronze chandelier, for example, was hanging in the dining room of their University Hills home when they moved in more than 20 years ago. It was removed and kept “in my pile of things that I wanted to be able to use one day,” says Nancy. Restored and rewired, it now hangs in the new home’s living room. Likewise, a 1930s crystal chandelier was taken down from a house the Georgens renovated in University City. “The chandelier was broken but the leaded glass crystals were in perfect shape and just beautiful,” the homeowner notes. She kept the crystals, which were added to a new chandelier from Wilson Lighting and hung in the dining room. “When you add the old crystals, it looks like a restored light,” says Nancy.

One of their favorite pieces is an Art Deco, etched milk glass light in the entry foyer. It, too, came from their previous house. “The lighting we have helps capture the feeling of an old house,” the homeowners say.

A 90-year-old house originally stood where the Georgens’ new home stands today. Before the old house was taken down, four Arts and Crafts glass doors were salvaged, then restored, painted and repurposed as the cabinet doors for built-in bookshelves in an upstairs loft office. “I wanted to take a piece of the original house on this site and have it in our house,” says Nancy. “It’s good karma.”

Similarly, the Georgens had salvaged leaded glass panels from a house they owned; these panels were repurposed as doors for built-in white oak cabinets in the billiards room. “When you have doors that are 100 years old with new cabinets, you can’t just put anything in there,” says Kathy Israel. “We sent a door to Plato Woodwork, who made these cabinets, and they made it all work together.”

The same house yielding the leaded glass panels surrendered another treasure—white and black Vitrolite tile from its kitchen. An opaque structural glass manufactured from about 1900 through 1947, slick, shiny Vitrolite epitomizes Art Deco and Art Moderne movements. In the Georgen home, the tiles found new life on the walls and as an arched frame bordering the mirror in a second-floor bathroom.

New construction provides the opportunity for advancements in energy efficiency. A geothermal system heats and cools the new home for one-fourth of the cost of their 100-year-old Tudor. The system includes a UV air scrubber and HEPA filter—pre-COVID decisions that Nancy calls “fortuitous now that we are all so aware of germs.”

“There is so much character in older homes that when you go in one, especially one that might be slated for demo, it’s almost like striking gold when you find a treasure,” says Israel. “Nancy and Mike’s knowledge of these old homes and their years of teamwork in owning these old homes shows in bringing character to a home that’s brand new.”