After years of trial and error, this homeowner found the perfect blend of English and Asian gardening influences for her University City yard. 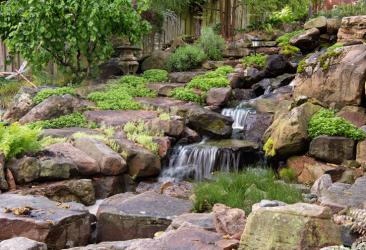 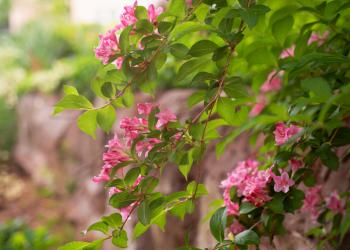 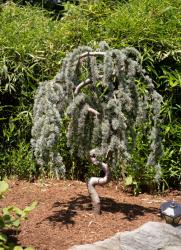 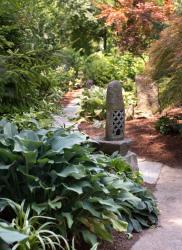 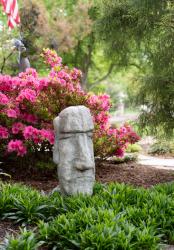 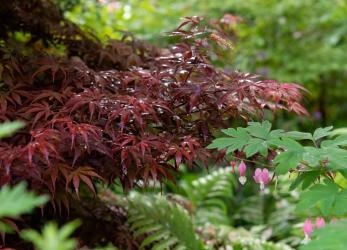 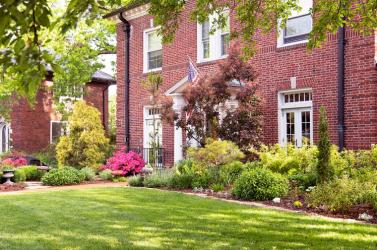 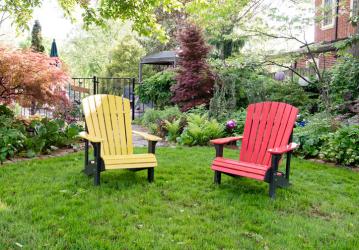 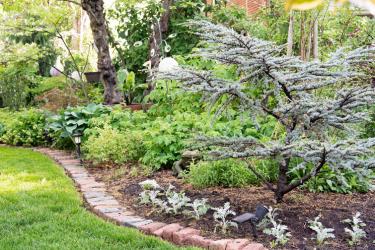 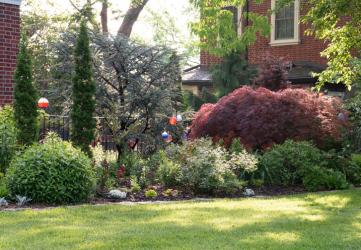 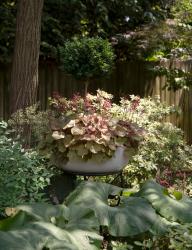 It is a huge leap over land and sea from a tiny garden plot in Scarborough, Yorkshire, England, to a .4 acre, waterfall-accented landscape in University City. Christine Mackey-Ross has done that with such agility and water wings that the Missouri Botanical Garden selected her welcoming, color-accented front yard and serene, architectural back yard to be displayed as part of the organization’s 2020 garden tour. It is a gardening achievement she calls “above and beyond.”

As a small child in England, Christine marveled at the vegetables her grandfather managed to grow on a small plot of land. Then, he gave her a tiny plot of her own. “I think I have loved gardening ever since,” she says.

Christine came to St. Louis when then McDonnell Douglas (now Boeing) lured her father, a British engineer, from the United Kingdom to the United States. She began gardening in earnest when she and her husband Jim owned their first house in University City, which had a much smaller yard.

Very near where she currently lives, it was a garden, she recalls, that cost very little money but was heavy on sweat equity. “I joined garden clubs. I got things from neighbors. People in this neighborhood give things away. My husband jokes that the only reason we moved from that house was because I had finished the garden. “I call the other house my ‘starter garden,’” she continues. “By the time I moved to this house (20 years ago), I had learned a number of lessons.”

First and foremost, Christine emphasizes, is “take time to get the soil right (amending poor soil with organic matter) so you are not fighting it the whole time you are gardening.” A close second would be to “go with what you have and live with the limitations that nature gives you in terms of light and drainage before you put too much into your garden. It really takes a year and you have to look all year. If you don’t get the soil, light and drainage right at the beginning, you’re going to be wasting a lot of money.”

The front of her house, which she shares with neighbors and passersby, Christine infused with color and an abundance of shapes and textures creating “an English cottage look because that’s what I grew up with.” In the spring hot pink azaleas provide a backdrop for mounds of pale pink dianthus. Even when nothing is in bloom, red-leafed Japanese maples provide constant color amidst lush green foliage. Large, blown-glass globes in glowing primary colors along with Japanese lanterns provide a party-like ambience on ordinary days and comfortable red and  yellow Adirondack chairs draw a visitor’s eye. Likenesses of small animals tucked among the plants add a touch of whimsy.

The one-story drop-off from the front of the house to the back presented a major landscaping challenge. Working on the project herself, she initially overcame that obstacle with a series of terraces that made the severe hill less treacherous. “

After living with that solution for a period of time, she had a change of heart. “I wanted to do something quite different. I wanted a more restful, Asian feeling,” she recalls. “Working with landscaper Mark Files, who shared her vision, she added a collection of Japanese maples and distinctive, architectural conifers for four-season interest. Other favorites are two twisting, turning contorted filberts also known as “Harry Lauder’s Walking Sticks.”

More dramatically, however, they brought in five tons of rock to turn Christine’s terraces into a story-high waterfall. Wide stone steps alongside the rushing water allow a visitor to descend gradually from the front to the back yard. Low-growing, bright green sedum and feathery ferns soften the edges of the stone and blend the rock into the overall landscape. Christine describes the waterfall as “magic,” even in winter when the surface freezes but water continues to flow underneath. “It has two pumps,” she explains. “In the winter we keep it running at half strength because it has attracted so much wildlife, and they depend on it. We have a pair of owls who have mated and a falcon.

“One thing gardening has taught me is that it is a process” she reflects. "You can get a sense of completion when you finish a task, but it is never over.” With the extremes of climate in Missouri, “you have to go with what works. You have to introduce an element of native plants in your garden, particularly if you want three seasons of color. While she loves heuchera/coral bells with its foliage that comes in a variety of lush colors from vivid purple to bright orange and rich gold, she warns that they can be hard to grow. “They can be fussy but if you find one that does well, they really add a splash of color to your garden.”

She also stresses the importance of planting, what she calls “legacy trees: big-tent canopy trees” that will come to maturity for future generations, not during the time that current homeowners garden on the property. “You need to garden with the real intention of how you are impacting the future,” she believes. Her back yard includes two ginkgoes, oaks and a very tall locust  “I grew from seed in a pot. I’m really proud of that.”

When it comes to gardening mistakes, she cautions against planting anything that can become invasive via seeds carried by birds or spreading rhizomes. Included on her list are loosestrife, cleome/spider flower, star-of-Bethlehem, and lily of the valley. She continues to fight against a stand of inherited honeysuckle and battle previously existing bamboo that was not a problem until she installed an irrigation system. “I do one big project a year and this year’s is digging a trench around the bamboo,” she notes ruefully.

As time goes on, she has relied more on perennials than annuals. I love annuals and I do use them for splashes of color, but my goal has been to use fewer. I used to use 10 flats a year. Now I am down to two or three.”

While it might seem that simply keeping up with her garden is a full-time job, Christine spends the majority of her days as the head of an employment firm that searches out senior leaders for hospitals and schools of medicine. “It used to involve traveling four days a week; now it involves endless Zoom calls,” she quips.

She brings in help for major projects and mulching but still does much of the work herself. Gardening she finds helps her relieve the stress of a high-pressure job. Not only is she surrounded by the beauty of nature, “You can weed for a couple of hours and accomplish something,” she notes.