A Kirkwood native and her family build their forever home in the heart of the suburb. 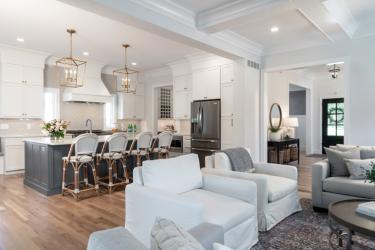 Anne Loden favors a neutral color palette. She selected slipcovers for the World Market club chairs to allow easy cleanup in a household with two children and a new puppy. The gray sofas are Pottery Barn finds 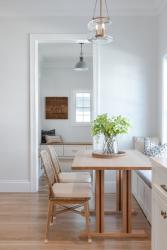 The Pottery Barn dining room table and chairs purchased a few years before they built this home “was the start of Anne’s natural wood phase,” Damien teases. Serena & Lily Swansea Paperweave wallcovering in Chambray mimics grass cloth. The beads on the Pottery Barn light fixture are wood finished by hand in an ivory powder coat. 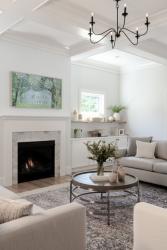 Designer Kelci Krueger originally placed bookshelf cabinets below the windows, but was unsatisfied once installation started. She opted to replace the upper cabinets with custom white oak shelves for a softer touch to the area. The use of beams in the coffered ceiling defines the family room even as it flows seamlessly into the adjacent kitchen. 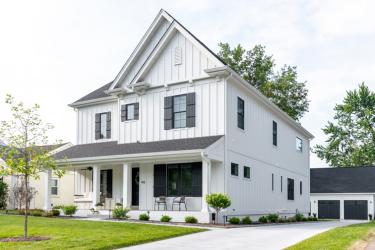 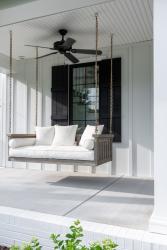 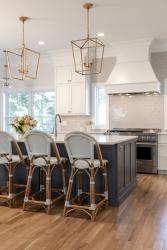 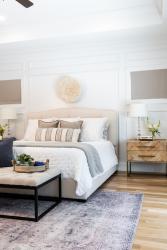 The same molding profile used in the adjacent primary bathroom was used to add interest to the headboard wall in the primary bedroom. “Applied moldings in the right setting really give a home a little bit of extra jewelry,” says Krueger. 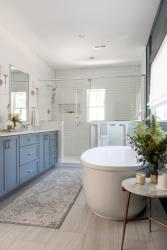 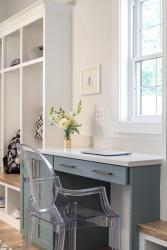 The cubbies’ shoe racks, can be adjusted for sneakers or boots depending on the season. Storage drawers along the walls hide items not in current use. The tranquil shade of the blue desk is Sherwin-Williams Whirlpool. 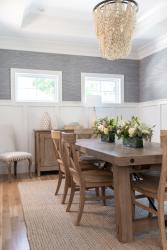 The Pottery Barn dining room table and chairs purchased a few years before they built this home “was the start of Anne’s natural wood phase,” Damien teases. “This was my start to a light, bright, airy, coastal feel in my home,” Anne says. Serena & Lily Swansea Paperweave wallcovering in Chambray mimics grass cloth. The beads on the Pottery Barn light fixture are wood finished by hand in an ivory powder coat.

Anne Loden is a self-described fan of Kirkwood. Born and raised in the suburb, she loves the walkability, the downtown and the sense of community. No wonder, then, that she and her husband Damien found the lot for their new home a half mile from their existing Kirkwood house by way of a neighborhood Christmas party in 2019. A fellow partygoer mentioned Mahn Custom Homes & Renovations had placed a for sale sign in a nearby yard.

Damien says they’d been “passively looking” for a lot in a central corridor surrounding Van Buren and Washington. “Our daughters are in Keysor Elementary, so this was the area we were targeting,” he says.

Their existing house in Kirkwood, built eight years ago upon their return to St. Louis from a work assignment in Austin, TX, was a whirlwind process, they say. At the time, they had a toddler and a newborn. “It’s hard to envision how you will live in a house’s spaces when your kids grow to be 10 and 8, and then what that will look like when they are teenagers,” says Damien. “You have such blind spots to how spaces will really work when you’ve never gone through it before.” They wanted a second go-around, they say, to design and build what they hoped would be their forever home.

During initial meetings with Mike Mahn, president of Mahn Custom Homes, and Kelci Krueger, Mahn’s lead designer, “they asked us a lot of questions about what we wanted, and we also discussed what we could build on the lot and what we couldn’t,” Damien recalls. “This was a massive undertaking for us in terms of our time, our trust in them and the financial aspect. We had a very good feeling about Mahn. Kelci was a massive part of our decision to move forward.” With the Mahn team engaged, the Lodens met architect Jeff Day of Jeff Day & Associates to begin making their dreams a reality.

The couple wanted an open concept for the home’s main floor, but they still wanted defined spaces. Anne wanted her kitchen sink placed in a large island. Damien wanted great flow from the indoor living spaces into the outdoor areas, so the patio felt like an extension of the family room. In addition, beamed ceilings in the family room, a spacious primary bathroom and white board and batten siding for the exterior with room on the front porch for a swing were must-haves.

Krueger describes the couple’s design style as transitional. “The goal was to build a house that was light and airy that had a bit of color,” says Krueger. “Staying with Anne’s desire for a neutral base, we added moldings, wall coverings and other design elements to make things interesting.”

Working with her colleague, assistant designer Lauren Beaven, Krueger designed a light-filled kitchen featuring Anne’s must-have large island (5 feet by 8 and a half feet) topped with gleaming Caesarstone Quartz in Frosty Carrina. White cabinets extending to the ceiling and shimmering, light gray subway tiles for the backsplash coordinate with the island painted in Benjamin Moore Wolf Gray. Anne selected the Serena & Lily rattan barstools with woven resin seats and backs. “I searched many, many Instagram and Houzz photos, and all my inspiration photos had these stools,” says Anne. “If we designed stools just for this space, this is what we’d design.”

The kitchen flows into the family room, but the family room’s beamed coffered ceiling helps separate the spaces visually, Krueger says. Anne selected slipcovered club chairs from World Market for easy cleanup with two children (and a new puppy). “I’m big on a neutral color palette to convey a bright, airy feeling,” says Anne. The flow of the kitchen and family room into the outdoor patio is one of Mike Mahn’s favorite features of the home. “It’s wide open and allows easy entertaining and family time,” says Mahn. “There are different spaces, but it isn’t compartmentalized, so it just allows this wonderful gathering space for the family to grow and make lifelong memories.”

The kitchen also leads into a mudroom, where Krueger and Beaven designed a custom storage system specifically for the way the family lives. The cubbies’ shoe racks, for example, can be adjusted for sneakers or boots depending on the season. Storage drawers along the walls hide items not in current use.

Another room that gets raves from everyone—homeowners, designers and builder—is the primary bathroom. The Lodens wanted a space that was a bit more spacious than their previous bathroom. For a little wow factor, Krueger suggested an accent wall in a dark, bold color enhanced with decorative moldings. “Anne was a little nervous at first about the dark color, but once it was done, she told me how happy she was that we did it,” says Krueger. “Applied moldings in the right setting really give a home a little bit of extra jewelry.” Krueger added interest in the adjacent primary bedroom by using the same molding profile on the white wall behind the bed.

Details such as the trim work, 10-foot ceilings on the main floor, the beamed family room ceiling and other elements the Mahn team suggested or designed make a home uniquely special, says Anne. “As we approached building this house, we realized that if we did it right, the upgrades and details would be worth it,” she says. “And it’s turned out to be a beautiful, beautiful home.”

For Damien, the payoff occurred this summer. After Independence Day fireworks, the Lodens and Damien’s brother’s family walked home and hung out on the Lodens’ new front porch, children swinging on the front porch swing and everyone talking with passersby enjoying the holiday. “I just had the thought, ‘this is why we did this,’” he says. Anne adds, “Kirkwood’s sense of community is so prevalent right where we are. It’s just that quintessential neighborhood feel. Now I need to get window treatments up because this is it. We’re staying here forever.”