Working alongside a team of top-rate professionals, these homeowners created their Colorado dream vacation in their own back yard. 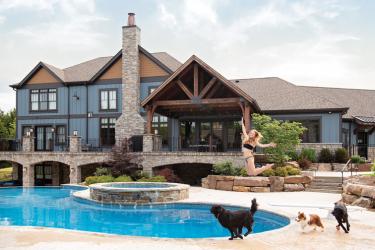 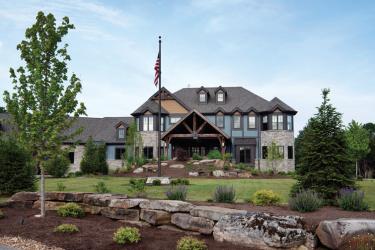 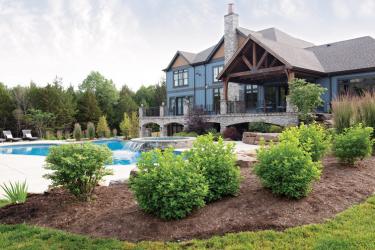 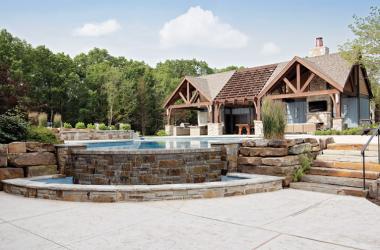 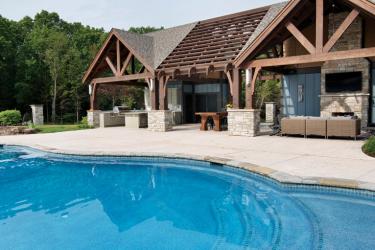 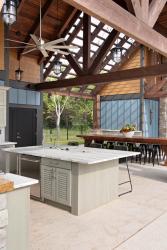 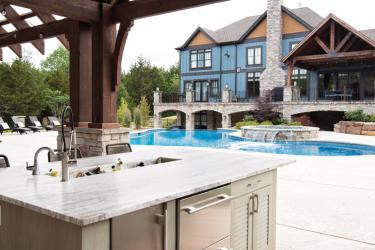 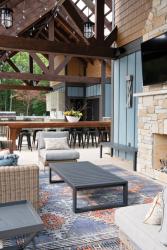 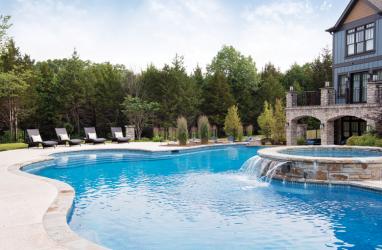 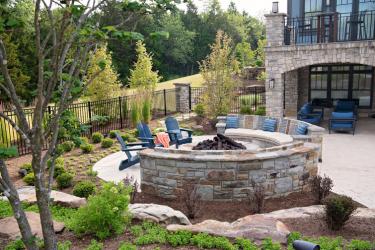 It all began with the land; a five-acre tract in Hillsboro, where Mary and Rich Patterson loved living and raising their two daughters, Sydney and Stella.

The property encompassed a field and surrounding woods. When they first viewed it, Mary saw potential. Rich worried that it was too flat. The setting was important. The couple planned to build a dream house that reflected their love of ski trips to Keystone in Colorado and multi-generational family gatherings at Branson’s Big Cedar Lodge. They were not thinking small. They had in mind a massive project. It was important that it settle into the land and look like it belonged. Mary’s vision and confidence won out over Rich’s skepticism. They purchased the land in 2011.

In the years they owned the land and waited for the right time to build, they thought on the stone and timbers they hoped to incorporate, the ample space they needed as they welcomed their growing daughters’ friends into their home and their love of entertaining large gatherings of family and friends, particularly from their church. They wanted space both indoors and out.

As plans for the house got actively underway three years ago, Rich turned to the internet to look for the right landscaper to incorporate the house with the land. The couple envisioned an outdoor space surrounding the house that would be in harmony with the Arts and Crafts style of the dwelling and encourage interaction with the outdoors. From the beginning, they wanted to surround their house with the natural, outdoor, mountain ambience that they loved in Colorado.  “We wanted to do the outside at the same time we did the inside,” sums up Mary.

After considering several options and looking over suggested designs, the couple felt that Poynter Landscape Architecture & Construction and designer Bob Wilhelm understood what they wanted. It proved a choice with benefits well beyond a swimming pool and plants.

First, Bob understood the scale and feel of the project. At the entrance to the home, he designed a mountain scene complete with an elevated hillside and rocky waterfall dotted with water-loving iris, black-eyed susans, orange butterflyweed and butterfly bushes. The pool he created is huge, holding a volume of water that triples that of most large backyard pools. “When I saw the preliminary drawing, the scale seemed all wrong,” recalls Drew McGrail, general manager at Poynter. “I was assured it was not. I actually went out and measured to make sure.” The scale was right. “We were building a resort,” Drew concluded.

Yet, with undulating walls that look graceful rather than massive, it fits naturally into the landscape. Enhanced by plant-softened stone outcroppings that echo the curves of the pool and stone steps that alter elevations, it appears as a watery oasis in a woodland clearing.

That feeling is augmented by the selection of plants that accent the garden beds surrounding the pool. In the spring cultivated red buds such as diminutive “Little Woody” and less familiar white blooming redbuds, accent the space and reflect the native redbuds dotting the woods. At Mary’s request, Bob created a design specifically incorporating a large dogwood that existed when the couple broke ground on the project. Golden black-eyed susans (Rudbeckia) “Goldsturm,” more disciplined cousins of the wild black-eyed susans that bloom naturally at the edge of the clearing, bring bright color to the summer landscape and tie the garden to the woods. Graceful grasses ripple in the wind from spring through fall and blend the pool area with the clearing. The Poynter landscape plan focused on plants that were reliable in St. Louis and having the garden surrounding the pool at its peak during the summer.

A high-tech fire pit came into the mix with gas logs that can be turned on and off with a signal from either Rich or Mary’s phones. The overflow infinity lip of the swimming pool provides a waterfall-like view for guests gathered around the firepit.

While they were comfortable with the pool and the landscaping, Mary and Rich were wrestling with the finishes for the interior of the house that would turn the stone and timbers into home. Bob suggested they talk with Kim Taylor-West, who heads the K Taylor Design Group in Frontenac. He had worked with Kim on other projects and thought she might have the vision the couple was looking for. There was instant rapport. “We had designed everything the way we wanted it,” says Mary. “Kim made it all look beautiful.”

One project remained: the outdoor kitchen and pool house. “We were stuck on the outdoor kitchen,” Mary says. “We didn’t know what we wanted, how big we wanted it and how to finish it. We knew we didn’t want it outside the lower-level door. Bob said, ‘Why don’t we talk with (architect) Jeff Day’ and it all went perfectly from there.”

Jeff’s first step was to talk with the couple about how they wanted the backyard to function “and get those things designed in and from there make sure it was an attractive design with the timbering and stone to get the mountain home, Colorado resort feeling. The pool was large; the pool house had to be in balance.”

The structure features three separate areas: a permanently roofed, open-air kitchen on one end and a living room-like space with a huge stone fireplace and large-screened TV on the other. The two are linked by an open-roofed dining room centered with a massive table created from beams left over from the pool house. Designed and constructed M. Simeone Contracting and Rader Construction, the table can easily seat 14 and handsomely reflects the Arts and Crafts detailing of the house. Walbrandt Technology added a sound system to allow music to flow through and unite all the outdoor spaces.

Because the pool house is across the pool from the main house, it was important that the outdoor kitchen be self-sufficient. As well as a large grill, it includes a deep sink, dishwasher, refrigerator drawers and plenty of Beck Allen, all-weather cabinets well-stocked with everything needed to throw a dinner party. There is no need to make continual trips back and forth to the house.

Kim suggested an island where Rich and Mary can pull up tall chairs “if it is just the two of them on a Wednesday night.” Constructed of Fantasy Brown Suede granite by SS Stone in Hillsboro, the stunning island includes a built-in trough sink that can be used for clean-up or food prep but also doubles as a place to ice-down drinks for large gatherings. While beautiful, “everything can be cleaned up with a hose,” Kim says.

A lovely, large bathroom with detailed tile work that reminds the Pattersons of vacations in Turks and Caicos adds to the resort-like feeling of the structure as does the natural looking outdoor shower. The shower, Mary laughs, was added when she ended up with an unused shower pan originally meant to be part of a dog-washing area in the house.

With all the incredible design features in the landscaping and pool house, a small suggestion from Kim is one Mary is happy for nearly every day in the summer. “She said, ‘Mary, we need to put in a washer and dryer. You don’t want to be lugging armloads of towels back and forth to the house every day,’” Mary recalls gratefully. “I am a very practical designer,” Kim quips.