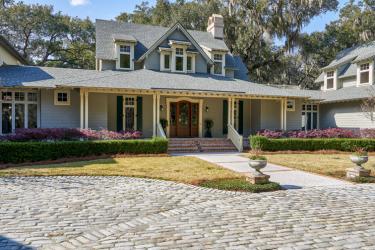 The homeowners added a golf cart garage as well as a finished space over the garage to take the place of the basement storage from their St. Louis home. 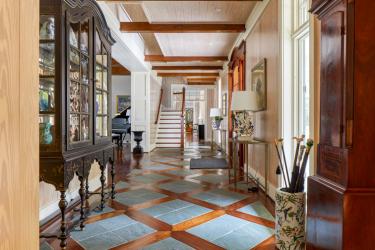 A cherished treasure from the homeowner’s collection, the cabinet in the main hallway was the perfect place to display items that weren’t as coastal as the rest of the space. 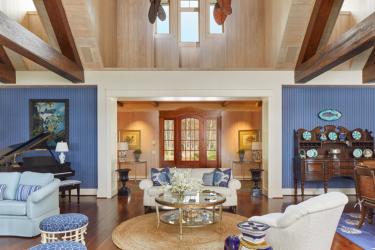 The main entry opens into the large great room. A seating arrangement in the middle of the room includes a coordinating loveseat and accent chair. The Marge Carson tango coffee table is finished in deco silver with vintage gold and sits on a woven rug. Century stools in a blue Kravet fabric brighten and balance the colors from both sides of the great room. 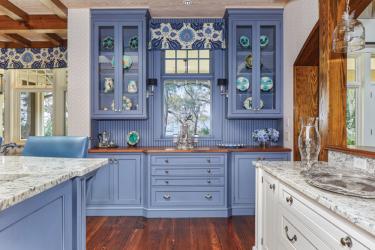 The built-in cabinetry was added during the renovation for more storage. Gigi chose a Brunschwig & Fils linen print in sapphire blue for the window treatment. 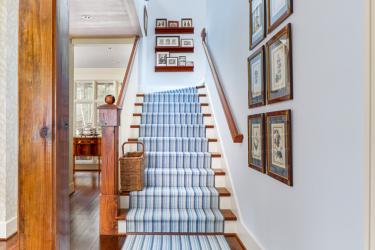 The La Cornue range was the color inspiration for the kitchen and the whole home. The island and built-in cabinetry was color matched to the range. The wife’s collection of century old Wedgewood calendar plates in blue and white add continued pops of blue and are displayed in the lighted upper white wall cabinets. 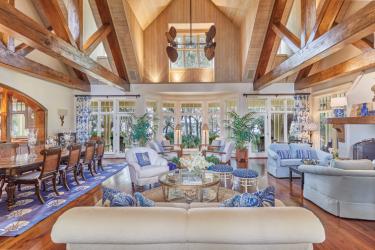 The open great room is separated into three distinct areas including the dining room, living room and middle seating area. The ceiling beams were given a light whitewash to bring them to life and provide definition from the ceiling. The Palisade double fans are finished in a rust/antique woven bamboo to provide a gentle island breeze. 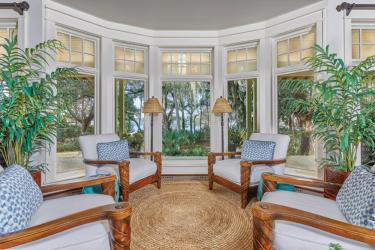 Brought from their Florida residence, the four Sherrill chairs are a relaxing spot to take in the scenic island views. The lumbar pillows were done in a Kravet fabric that Gigi turned sideways to change up the look. 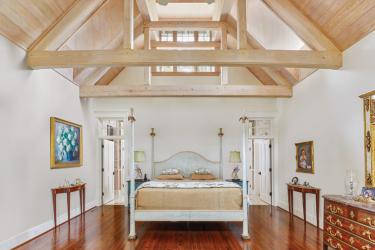 The homeowners already had the Patina bed, and Gigi painted the bed to fit into the soft color scheme the wife wanted for the master. The fabrics chosen for the pillows and coverlet brought the outside in. 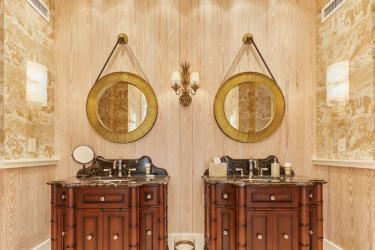 New his-and-her vanities by Sherle Wagner were topped with round brass mirrors. 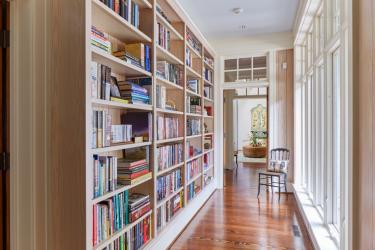 Gigi and the homeowner loved the existing Bob Collins “Continents” wallpaper in the master bath and took great care to preserve it when making updates to the space. The wood was kept in its original sepia tone to add some character unique to the island. 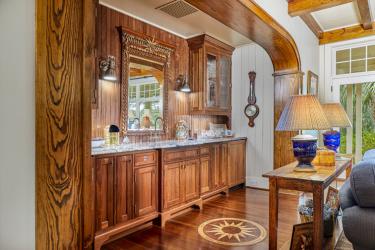 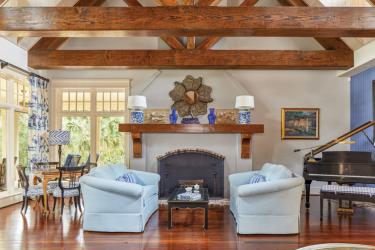 The color for the two facing aqua loveseats was pulled from the drapery fabric, which is a modern interpretation of a blue willow china pattern the homeowner loves. The game chair fabric is repeated from the coordinating pillows in the bay seating area.

When it came time to start thinking about retirement, a St. Louis couple knew their next adventure would center around boating. In search of a coastal property with a deep-water dock, the wife happened upon Spring Island, South Carolina, when she was researching historic plantations online.

Located north of Hilton Head off the Port Royal Sound in South Carolina approximately an hour and a half from Charleston and 45 minutes from Savannah, Spring Island is a whimsical coastal forest. The 3,000-acre island includes more than 1,000 acres of protected nature preserves with a vibrant community woven carefully into the landscape.

The homeowner had spent a lot of time in South Carolina as a child and couldn’t believe this magical place existed and she had never heard of it. “When I suggested Spring Island to my husband, he asked why I would want to move to South Carolina. I said, ‘Let me sell you!’” she says. The Spring Island website was all she had to show him. “Every thumbnail on the page was on my retirement bucket list…boating, fishing, nature, the list went on and on,” the wife explains.

What really stuck with the couple was the wonderful sense of privacy and natural setting the island had to offer. “You don’t see houses when you come onto Spring Island. They’re all nestled into nature’s curtains,” the wife explains. “You’re tucked among the live oaks, birds and other wildlife.”

They purchased an arts-and-crafts style home built in 2001 that had good bones and beautiful architectural details like wood beams, intricate ceilings and arched entryways. The wife says the home had all of the right spaces including a formal living room, family room and office, but it needed a lot of refreshing to fit their personal style.

The couple’s longtime interior designer Gigi Lombrano was instrumental in the transformation from the beginning. One of the first design decisions the group made was to paint much of the window and door trim white to allow the beautiful floors and ceilings to stand out. “The white paint was sort of the elephant in the room,” Gigi laughs. “We knew sooner or later we had to paint, so we just held our breath and went for it.” The lightened trim made all the difference in the brightness of the home and allowing some of the picturesque views to shine.

Another key in the redesign was reimagining furnishings the couple already owned from previous homes in St. Louis, Florida and Montana to fit the low-country island vibe. “We didn’t have to throw out the old,” the homeowner says. “Through Gigi’s talents she was able to transform what we had using fabrics to update the very traditional St. Louis pieces and the coastal Florida furnishings.”

Gigi says the wife is a fabric connoisseur and is very perceptive when it comes to color, texture and the story a fabric can tell. So it is no surprise that the infusion of color into the home played an equally important role in the renovation as fabric choices. Delphinium blue was a key color Gigi weaved throughout the home in fabrics, paint and tile.

Shades of blue abound in the kitchen, which was the only room in the home that had to be gutted. Originally dark with burgundy cabinetry and green countertops, the room needed to be lightened. The homeowner fell in love with a La Cornue range in the perfect shade of blue she saw at Williams-Sonoma in St. Louis. The company was able to send her a color chip, which Gigi sent to the kitchen designer of the former St. Louis firm Baygents. The designer matched the island base and built-in butler’s cabinetry by Woodmode to the chip.

The blue scheme continues in the open living area, which includes the dining room, living room and great room. Gigi created distinct and separated seating areas to delineate between the functions of each space in the room while using color and fabrics to tie the areas together. A wall of windows, which features a beautiful bay, highlights the amazing views and natural light.

In the living area, Gigi wanted the window treatments to be minimal, but they needed some fabric to frame and soften the wood. The homeowner fell in love with a fabric she describes as a modern interpretation of the blue willow china pattern she adores. The fabric became the foundation of the color scheme of the whole room. Two loveseats set in front of the fireplace were recovered from the homeowners’ St. Louis home in a serene aqua fabric. Gigi pulled the aqua color from the drapery pattern. Gigi had all of the furnishings reupholstered in St. Louis, which the homeowner says was so convenient because Gigi could keep an eye on the progress, and then it was all delivered to South Carolina at the same time.

The dining room features a coordinating blue wall treatment, which helps draw your eye from the wall down to the custom-made area rug from New York. The homeowner says Gigi worked tirelessly with the company to achieve the right look for the space. The unique coastal, shell-like pattern helps to deformalize the dining set.

The last room to take on a new personality was the family room, which was previously a media room. The fabric Gigi suggested for the drapery panels and pillows brings in additional tones of golds and greens, which make the room feel very warm and cozy. A nook that had been for the media equipment was transformed into a wet bar. The homeowners added a special touch in the wood floor in front of the bar with a compass rose,  the husband’s idea, that has the latitude and longitude of the house. Little details like this bring the story of the home to life.