It was a move of less than a half mile, but the setting seems a world away in this Ladue garden. 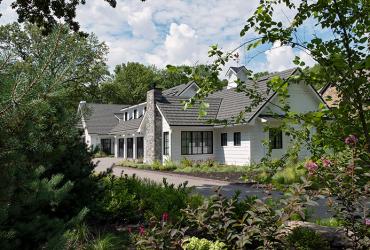 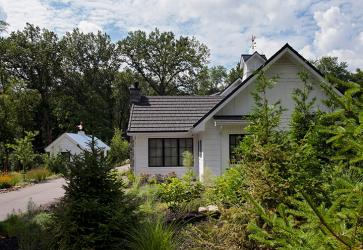 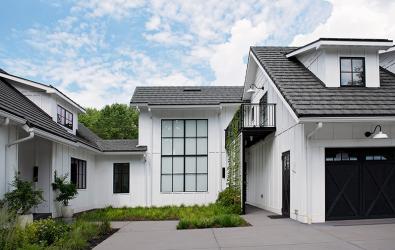 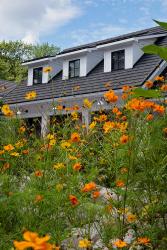 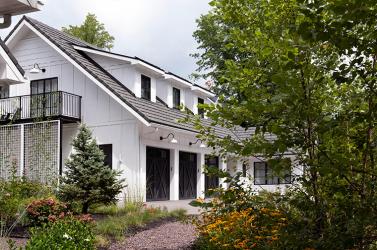 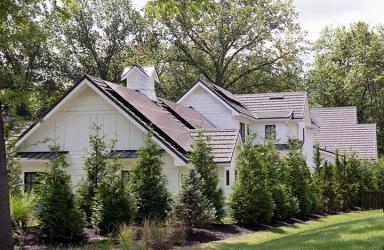 A little over two years ago, the home these Ladue homeowners loved, and where they raised their daughters, was surrounded by vast lawns and manicured shrubs. Now, they are tucked away in the woods in a house designed to resemble a country cottage. Creeks run along two sides of their property and gravel pathways lead through fields of wildflowers to a clearing containing a fire pit surrounded by tree-stump stools. Making it seem even more remote, the nearly one-acre lot backs up to an 8-acre nature preserve. Both the house and the landscaping that surrounds it are designed with sustainability in mind and to be a part of the natural setting.

While the change seems abrupt, the mind-set that created it was years in the making. “We used to live in a classic, old-school house on nearly two acres with manicured landscaping and a crew that came every week to cut and trim. I used to joke that I put all the landscape guys’ kids through college,” the homeowner recalls. “With the children grown, nobody was coming to play soccer on the grass, and we didn’t need a large lawn. I decided I wanted to build an efficient house.”

“We’ve always been interested in sustainability and it drove us nuts that the kids were giving us grief about living in a world with global warming. I decided if I was going to build a house, it would have as little impact on the environment as possible, he continued. “You can do that for good reasons (strictly for the environment) and you can do it for selfish reasons. In seven years, you break even on your investment in solar and after that it is payback.”

Finding the right location for their sustainable home was not easy. Fate intervened when the homeowners were out walking their dog in a charming area full of twisting lanes not far from their current home. “We actually walked past when the man was putting a ‘for sale’ sign in front of his house.” The couple saw wonderful potential in the wooded lot, which at that time contained a small ranch house. They quickly purchased the home for the lot alone.

Long interested in gardening, the husband had grown up with a father who had a huge vegetable garden that he worked on as kids and also lived for a time while working as a reporter in Detroit with an aunt who had a beautiful English garden that was on numerous garden tours. The wife's job concerns environmental compliance and sustainability.

Their experience of traversing The High Line in New York City gave them ideas about sustainable gardening. Once an abandoned, elevated railway spur on the west side of the city, the tracks had become overgrown with local vegetation creating a green ribbon in the midst of bricks and cement.

What had happened by chance inspired environmentalists in New York to expand the space into a walkable garden featuring native species, that is now the center of numerous community activities. Once they saw those plantings, the homeowners knew just how they wanted their own landscape to appear.

Taking their cue from the beauty of the flowering native and sustainable plants they had seen on The High Line, they began to create a plan for a similar native/sustainable garden surrounding their sustainable house. But before they could create a garden, the creek bank to the east of the property had to be shored up. Rapidly deteriorating, chunks of the property were sliding into the creek and an existing shed, grandfathered where it was on the existing land, was in danger of being swallowed up. It was an erosion and drainage project that eventually involved the Metropolitan Sewer District and the Army Corps of Engineers.

Once the shed was stable, eventually becoming an art studio for their daughter and later an office for the wife, it was time to plant. “I tried to choose native plants and grasses, but I also didn’t want the landscape to look like I was a hermit that didn’t do anything to the yard,” he explained with the thought that native gardens can be criticized as looking weedy. “I like the look of native plants but I didn’t want it to look neglected.”

Fate intervened a second time when the homeowner and his daughter were on a bike trip to Jefferson City and cycled past a nursery in Defiance that was going out of business and filled with locally grown trees and shrubs. “I drove back out and bought everything they had left,” he explains. They also talked and took suggestions from experts in the best native plants to use in more controlled environments.

Full Care landscaping provided a valuable assist in the placement of trees, shrubs and perennials to give the garden a look that was at the same time both well maintained and natural.

While some of the garden was carefully planned, one of the best surprises came from two pounds of wildflower seed ordered from American Meadows, a website the homeowner discovered when searching on the internet for wildflower seeds. “You can order for sun or shade and the state you live in. It was a real Hail Mary. I just tossed the seed into the rocks along the creek and thought maybe something might come up.”

Everything came up. “We had some flowers 5 feet tall, and it seemed like fireworks when you looked into the creek. When we had friends over, we had giant bouquets of flowers from the creek. This year, I am ordering five pounds of seed,” he happily confirmed.

Working with different plants has been a learning experience. “It is more difficult to weed a garden with native plants than a normal garden because some of them look like weeds when they are coming up. This year, I am not pulling anything out or cutting anything down until I am sure,” he says with a laugh.

Over the past year, they have also added bees to the landscape. “One of my old neighbors had several hives and had to move them,” he explains. “I suggested he could move a couple of hives to my house. Now I have pollinators in the spring and honey in the fall.”

This past year, being confined with COVID, gardening has been a major outlet for the homeowners. “COVID led me to spend every afternoon in the garden last spring and summer,” he says, estimating that he spread 15 yards of gravel on existing pathways and 60 yards of black mulch in spring and fall.

While planting the garden was a monumental undertaking, the result is a beautiful landscape filled with sustainable plants that come back every year and do not require constant attention.

“You can have a pain-in-the-neck garden, or you can plant things that come back year after year,” the homeowner says. “For two years, we haven’t had any annuals in the garden except for window boxes.”