The Missouri Botanical Garden boasts a host of rare and beautiful plant varieties; you just need to know where to look! Learn more about the Mauritian Bloody Bellflower, an endangered and beautiful breed found only on the island of Mauritius in the Indian Ocean. 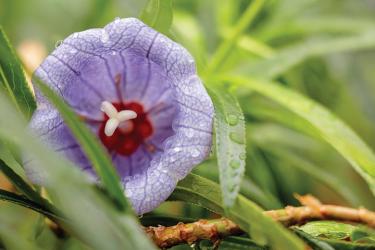 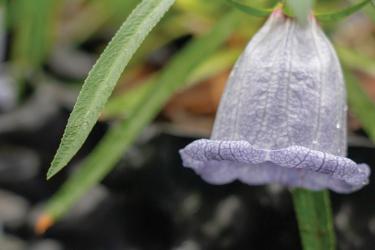 Tucked among wild vines and blooming orchids that fill the Climatron is a pale indigo bell-shaped flower with dark purple veins and bright red nectar. The Nesocodon mauritianus, or  Mauritian Bloody Bellflower, is endemic to the Indian Ocean island of Mauritius, where it grows on cliffs near waterfalls. The plant is thought to be pollinated by geckos.

Limited range, human interference and invasive species of the area threaten this plant’s survival in the wild.

The Missouri Botanical Garden’s connection with Nesocodon goes back to the 1980s when Garden president Dr. Peter Wyse Jackson, then a curator for Trinity College Botanic Garden, led an expedition to Mauritius. On that trip, Dr. Wyse Jackson leaned over the edge of the cliff and hooked two seed pods with his camera strap for propagation. The Nesocodonon display in the Climatron were all grown from seeds that are descendants of the same genetic material collected by Dr. Wyse Jackson more than 30 years ago.

Today, horticulture staff are continuing to keep tabs on the population as part of the Garden’s broader conservation work in Mauritius. The Garden is working with the Mauritian Wildlife Foundation and the Mauritian National Parks and Conservation Service to develop a program to save the critically endangered flora of Mauritius, one of the most threatened floras in the world. Native plant cover is restricted to less than 2% of the island. An estimated 61 endemic species of plants have already gone extinct. Of the remaining 267 endemic species, 89% are critically threatened with extinction.