Inspired by the compelling scenery of the great outdoors, artist Benjamin Franklin paints dramatic expressions of the land, layer by layer. 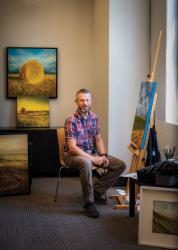 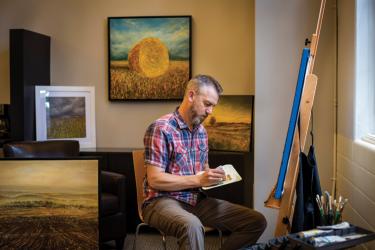 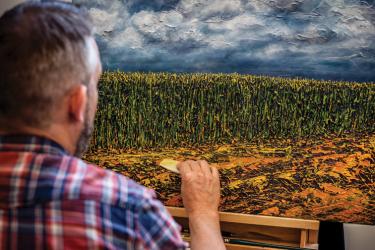 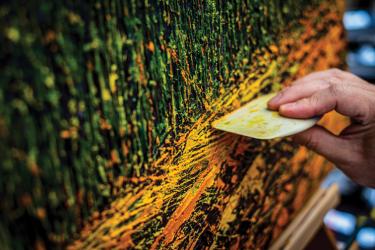 Painter Benjamin Franklin—yes, that’s his real name—has been obsessed with art since he was a child. Raised in Bingham, Nottinghamshire, a small town in the heart of the English countryside made popular by Robin Hood and Sherwood Forest, Ben was an avid comic book fan. He used to get one delivered weekly called The Beano from which he’d draw the characters and develop his own. Around the age of nine, he mastered a school assignment in which he traced and painted a bird image that was projected onto the classroom wall. After receiving praise and encouragement from the teacher, he began to draw birds regularly.

“I continued to draw and paint knowing that it could be a career,” recalls the artist. “While watching a TV show, there was an ad that promoted a career guide, which I sent off for immediately. It was in this guide that I learned about graphic design, and from there, I focused on making this my career with an emphasis on art and design,” he adds.

In the mid 1990s, Ben met his wife, Lydia—a native Missourian—in Edinburgh, Scotland, and they eventually moved to St. Louis. In 2000, they moved back to the UK, where they lived in the stunning Kent countryside for four years. The downside was the daily commute to London, so they returned to St. Louis where Ben set his sights on creating a branding, design and marketing firm called Yank and Limey. “It wasn’t until 2009 that I officially started the company, initially being both the Yank and the Limey,” jokes Ben. “I’m also a US citizen,” he adds, “and I partnered with an old St. Louis client to strengthen our capabilities.”

After his business took off, Ben would occasionally draw or paint, but not consistently. During a vacation in South Carolina, he found himself critiquing paintings in a gallery and thinking "I could do that." A year later, he went to Colorado, and it was on a mountainside that he started his new art career. He told his wife that in a year he’d have a website and would be selling his works.

“A lot of designers—once entrenched in computer technology—often lose their artistic roots, and it happened to me,” Ben admits. “I hadn’t painted with oil paints since art college. I knew I could create watercolors fairly easily, but I needed a challenge. I didn’t even want to use water-based oils—I needed to use the real deal and had no idea where this would go or if what I created would be any good,” he notes.

The first canvas was okay in Ben’s opinion, but for his second landscape, he felt he truly connected with the sky and clouds. His third painting, even today, is still one of his favorites—a scene from South Park, Colorado, with an incredibly dramatic sky he captured while driving through the mountains.

“The oil process can be slow, but it’s challenging, malleable and very expressive,” says the artist. “I’m not afraid to scrape paint on or off. If it dries and I’m not happy with the result, I simply add another layer. Texture and depth are magical elements of oil painting, so I build up layers—called the impasto technique—to create depth to my work. For finer details, one simply thins the oils, which I rarely do,” he notes.

Most of Ben’s inspiration comes from dramatic and compelling scenery. An avid hiker, he is most content when outdoors. He might be scaling a Colorado 14er or hiking the Yorkshire Dales, but the entire time, he’s in search of a painting, watching the colors change, absorbing the lands shapes and watching the clouds shift.

“The more expressive the land is, the more I want to paint it,” says Ben. “If my paintings take you away from your current mindset, take you to a place of escapism, and connect you back to the outdoors or a moment that you want to relive, then I have achieved my goal.”

Ben currently has a painting displayed at Art Saint Louis in the ‘Storytellers’ exhibit from through Sept. 10. He continues to build the volume of his work in preparation for a solo show along with accepting commissions.