What began as two smaller baths off the master bedroom was transformed into this 186-square-foot master bath and art gallery. 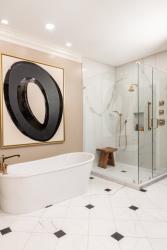 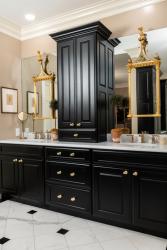 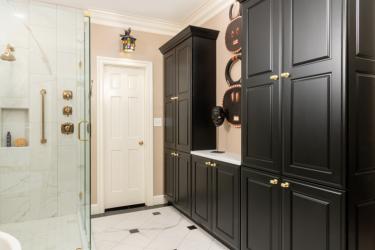 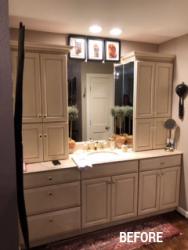 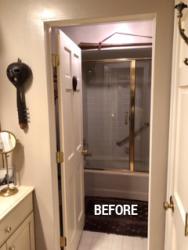 Having two small bathrooms rather than one large master bath convinced this homeowner that it was time for a complete bathroom makeover. “The master bathroom in my approximately 40-year-old home was designed back when ‘Jack and Jill’ baths were popular. As a single person, having two small bathrooms grew to be much more of an inconvenience than a pleasure,” the homeowner says.

To achieve the bathroom of his dreams, the homeowner worked closely with Jared Hillmann of Superior Remodel, LLC and Arlene Allmeyer of RSI Kitchen & Bath. Though the top priority of the remodel was to maximize the available space, the homeowner also desired updated amenities and style to complement parts of his extensive art collection, which he planned on decorating the new space with.

Once the walls were removed, the team and the homeowner decided on a double vanity, separate room for the toilet, large shower, a freestanding tub and a long wall of storage cabinets and artwork. “Arlene brought her extensive knowledge of products and options, Jared provided practical and experienced advice and I was smart enough to listen to the people who really knew what they were talking about,” the homeowner comments. “Plus, I can be very decisive, so hopefully I was a good client for both!”

Taking out the unnecessary wall allowed for the room’s centerpiece, a 5’-by-5’-foot shower with clear glass on two sides, giving full view to the beautiful tile work. Hillman was able to match the veins on the porcelain tile to mimic one large slab of marble. A little glamour was added on the floor by surrounding the marble-look porcelain with a black granite border and accent tiles. Kohler Vibrant French Gold plumbing fixtures were selected to complement the black and white theme and add warmth.

Displaying the homeowner’s new and existing art pieces was also very important in this remodel; African-inspired pieces that were in the original spaces were reused to add some of his personal taste into the space, while a striking Ted Collier painting was purchased to act as a focal point above the freestanding tub. The homeowner was excited to add a touch of St. Louis art to his beautiful collection.

“One of the interesting things that we did in the vanity area was to use two antique mirrors that the homeowner had in his collection,” Arlene says. “I thought the mirrors looked a little small for the vanity space, so the homeowner came up with the idea to install a plate glass mirror behind it, which made it look perfect!”

“The final result reflects my eclectic taste, allows me to still display art and objects of which I am very fond and is designed to provide a maximum use of the available space,” the homeowner says.