Retirement offers a couple the chance to put their personal stamp on Spanish Revival beauty. 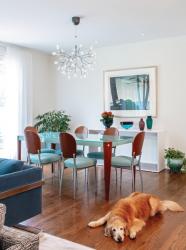 Imported from Italy, Risa’s glass, brushed chrome and cherry table, a treasure for more than 20 years, found a new home in the addition. The contemporary chandelier is new; it’s the Heracleum II Suspended Lamp from Moooi and takes its name from the plant that inspired the design. The signed, limited edition Will Barnet lithograph above the credenza is entitled Reclining Woman. “I’ve been collecting Will Barnet lithographs and serigraphs for a long time,” says Risa. “All the artwork in the family room is by him.” 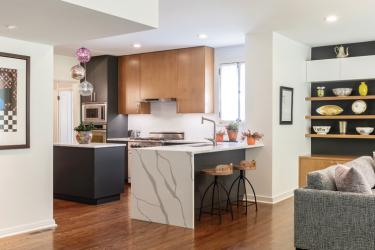 The kitchen dimensions didn’t change through the remodel, but sleek, modern cabinets make the space feel larger. A waterfall of quartz on the peninsula creates a breakfast nook. Builder Ladd Suydam notes fabricator Titan Granite’s impressive attention to detail in lining up the veins of the quartz. The homeowners wanted space to display their cherished art collection in the addition; a dark wall serves as backdrop for artworks displayed on wood shelves. Flooring by Custom Floors & More. 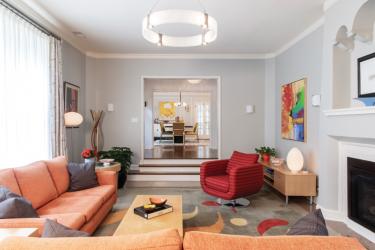 Color makes a big impact in the living room through shades of orange, pink and gold. “Having our own home gives us a chance to express ourselves,” says homeowner Risa Zwerling, who lived in Washington University’s Harbison House while husband Mark served as chancellor. 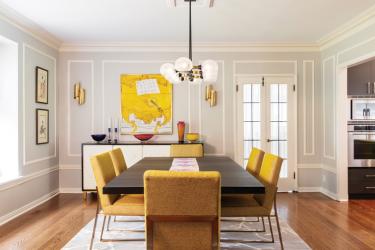 “I like to be bold with color,” says Risa Zwerling. She chose Clarke and Clarke fabric in Casanova Chartreuse to cover new Century Iris Brass chairs for their dining room. “It just so happened the large yellow painting matched beautifully.” Risa painted the work more than 40 years ago; it previously enjoyed a home in her daughter’s bedroom. The blackened walnut and oil-rubbed bronze dining table is Baker’s Liquid Dining Table by Kara Mann. 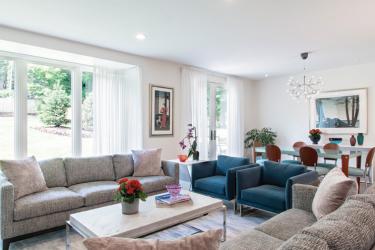 Capitalizing on the beauty of a large back yard, the design team brought the outdoors in through a bank of 8-foot-tall windows and French doors installed on the rear wall of the new addition. The addition’s family room invites with his-and-hers matching sofas paired with modern chairs. The homeowners say they spend most of their waking hours in the new “hub” of the home. 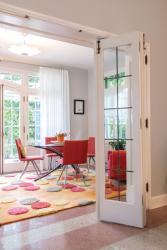 A centuries-old material, the terrazzo floor pairs beautifully with the homeowners’ modern taste in furnishings. Here, the sunroom features contemporary stylings in cheerful hues of pink and orange. 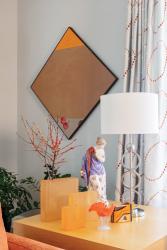 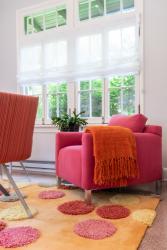 For more than 24 years, Mark Wrighton lived in Washington University’s Harbison House while serving as the university’s chancellor. He and his wife, Risa Zwerling, “loved every minute” of living in Harbison House, but upon Mark’s retirement in May 2019, they looked forward to putting their stamp on a home of their own.

House hunting in University City, the couple fell for a 1920s Spanish Revival. “It was clear the home was very well cared for, but there was no room to lounge in,” Risa says of the lack of a modern kitchen/family room open concept.

Even before making a final offer on the home, the Wrightons were introduced to Ladd Suydam Contracting to explore the feasibility of building an addition. “It’s a sizeable house, but it was blocked up in a way that didn’t meet their living desires,” Suydam recalls. “They wanted a new ‘hub’ of the house—a gathering place where they would spend most of their time on a daily basis.”

The Wrightons didn’t just want space, however. They wanted something dramatic—to be “wowed” every time they walked into the house. “They didn’t know what that ‘wow factor’ would be,” Suydam says. “That’s part of our process, to listen to the clients’ goals and in this case, figure out how to bring that drama.”

Capitalizing on the beauty of the large backyard, Suydam and architect Jay Reeves of SPACE Architects brought drama through light. The design/build team replaced the back wall of the house with a bank of floor-to-ceiling windows and French doors, bringing light in and helping the space feel as large and open as possible. By strategically locating the windows and doors, the team established two major sightlines from the front of the house to the back yard. “The wall of windows faces south and allows us to look out on a sea of green,” says Mark.

Removing the back wall to add the approximately 615-square-foot addition presented some challenges, however. “Any time you deal with a load-bearing wall that’s masonry, as in this case, you have to figure out how the load will be transferred to support the second story,” says Suydam. During demolition, contractors discovered the second story exterior walls were thinner than the main level walls; therefore, the steel beam that had been ordered to support the second floor was too thick and would protrude into living space on the second floor.

Re-ordering the beam or re-engineering it would mean additional costs and time. “We solved this challenge by essentially building another interior wall in the second-floor bedroom and on the landing to the main staircase,” explains Suydam. “In the bedroom, the walls were furred out creating a ledge underneath the window to hide the beam intrusion. Custom base was milled to match the existing trim.”

Removing the back wall of the home required reconfiguring the kitchen. New cabinetry includes a mix of stained and painted surfaces. Upper cabinets are maple – a species chosen for its clear, straight grain, which also lends itself to the Wrightons’ modern aesthetic. The island and a peninsula seating two people were painted Sherwin-Williams Iron Ore. A quartz waterfall edge—a hot trend—covers the peninsula and is visible from multiple vantage points in the family room.

The addition’s open concept—a popular trend for some time now—can bring challenges. “While we appreciate the generalities of the open concept mindset, we also like to bring in ways to make rooms feel like a room,” says Suydam. Planning for task and personal lighting, for example, helps delineate spaces for actually living in them, he says.

And live in it they do. With a serene blue color palette, the new “hub” of the home is cozy and inviting. His-and-hers matching sofas, for example, means no one is bickering over the most comfortable spot to watch TV or nap. Even with all the windows and doors, it’s a comfortable space year round. Energy efficiency was a top priority, says Suydam, who helped the couple select thermally efficient Marvin windows and French doors from Fischer Window and Door. Suydam used spray foam insulation in the walls and ceilings and added additional insulation in the garage and other existing areas of the home. Since the project’s completion in February 2019, solar panels have been installed on the flat roofs of both the garage and the addition.

“We are generating about 15 to 20 percent of our electrical needs,” says Mark, whose research interests prior to his university administrative career were in inorganic photochemistry, photocatalysis and the use of solar energy in photovoltaics. “Creating energy from these photovoltaics just thrills Mark to the core because it’s his life’s work,” says Risa.

One of the Wrightons’ priorities for the addition was space to showcase their art collection. SPACE Architects designed a wall with maple shelves to display several pieces. “We focused light on these works but wanted to keep them approachable,” says Suydam. “It’s not a museum.”

At Harbison House, works from Washington University’s collections were rotated routinely. In their own home, Mark and Risa love seeing their own collection every day.

Mark credits Risa and interior designer Tina Wolff of Wolff Interiors for selecting new furnishings for their home. He particularly loves the interesting, unique light fixtures selected for each space. “The light fixtures add a great deal to the first impression when you first come into the home,” he says.

During Mark’s time as chancellor, the couple were “in service,” Risa laughingly says. “Now we are ‘civilians,’ and so having our own home gives us a chance to express ourselves,” she explains. Mark says when they are home, they spend most of their waking time in the new space. “We just can’t tear ourselves away from here, and we find we are neglecting the other beautiful rooms in the house a bit,” Risa adds. “Every time I walk into the house, it’s thrilling.”