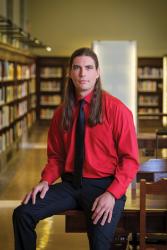 SLHL: Share an experience that was a major influence on your career decision.

Caleb: Having a personal relationship with the outdoors influenced me. I always knew I wanted to work with my hands and explore the wilderness. My childhood was spent floating Missouri's beautiful rivers and navigating the woods. Ever since I was a child, I've been drawn to being outside and becoming one with nature. As an adult, I continuously take backpacking trips and spend as much time outdoors as possible. There's a peace that's found in nature that no possession will ever give you.

SLHL: What is the biggest compliment you’ve received in your career?

Caleb: A garden enthusiast upon seeing the St. Louis Homes + Lifestyles 2018 Garden of the Year said, "This has got to be one of the top 10 waterfalls in the country." He then hired us to build him a 600-foot waterfall over 20 feet wide that falls 100 vertical feet into a private lake. And the second biggest compliment is on every single project because our clients allow us the freedom to artistically create each waterfall without many upfront plans. They trust us entirely to be the waterfall artists that we are.

SLHL: Who has been the biggest influencer in your career?

Caleb: My older brother, Josh, and I started Bauer Falls together. He introduced me to the waterfall industry after spending several weeks in Africa on a mission trip where he met someone that builds waterfalls for a living. I would have never been able to start the business without him, and we constantly bounce ideas off of each other. We're a team that's focused on continuously creating better waterfalls and moving forward so we don't become stagnant or lackadaisical in our approach. We're passionate about making each project better than the last. He's the best business partner I could ask for and a great role model as well as a brother.

SLHL: What was a project or experience that was a turning point in your career?

Caleb: Millstadt Falls, (recognized as St. Louis Homes + Lifestyles 2018 Garden of the Year), because it catapulted us forward into building large-scale waterfalls. Up to that point, we had been progressively creating more elaborate water features, but it was truly hard to explain what level we could take it to. Since we were given the opportunity and created this expansive waterfall, it showed people what we're capable of and allowed us free reign when it comes to creative design on all projects since. Millstadt Falls is the project that opened the door into the next level of waterfall design.

SLHL: What does it take to achieve a high level of success before 40?

Caleb: "Work hard, work hard, work hard," and be respectful of everyone. There's a lot of talented people and a lot of different industries; none are better or worse than the other. We're all just out there trying to make a living for our family. One's career choice doesn't define who they are as a person. Life's a team sport and if you can find even one thing you're good at and work hard at it, you'll end up succeeding and becoming part of a bigger team. Trust yourself, go with the flow and have fun.