Adding Grace to a Garden

A lot of love and learning went into creating this Crestwood garden.

Category:
Gardens
Garden of the Year
| 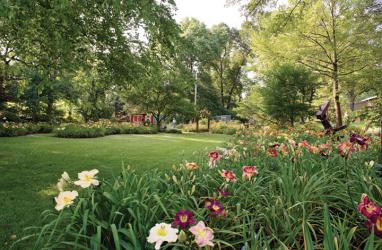 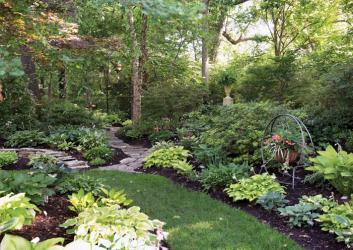 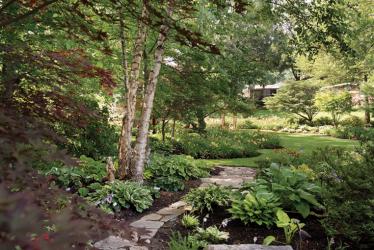 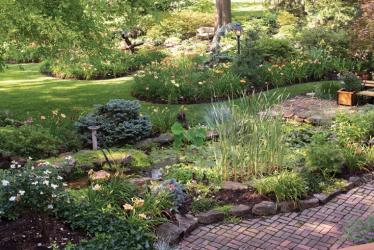 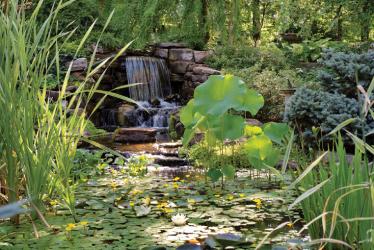 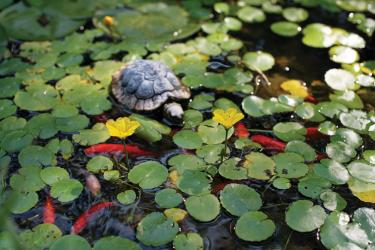 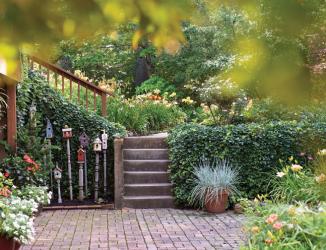 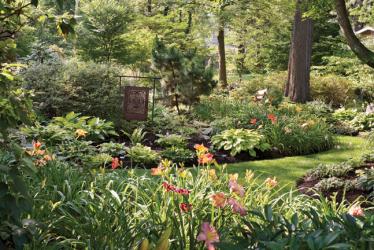 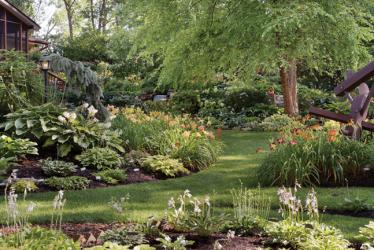 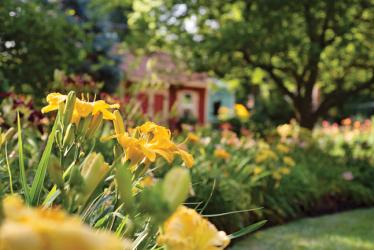 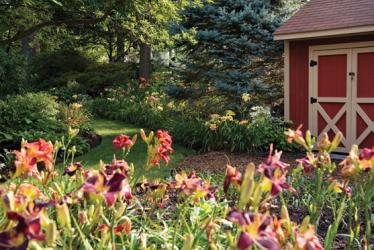 If a garden could smile, the Crestwood garden of Dave and Joan Poos would beam. There is a joyous exuberance to the beds that swoosh, swirl and occasionally even squiggle in uplifting curves across the three-quarter-acre landscape.

It is a graceful garden that is filled with color from spring when the azaleas and peonies flower through fall when the ornamental trees and conifers hold forth. But it is especially buoyant in early summer when the Poos’s collection of nearly 900 daylilies in riotous colors are in their glory.  Throughout all the seasons, the Poos collection of 800 hosta cultivars anchor the garden and provide a verdant, multi-hued, green backdrop for their more colorful botanical brothers.

Providing an additional treat for the senses, a stone-accented waterfall at the base of the garden rushes down a small hillside and spills into a flower-accented goldfish pond providing a splashing, multi-toned accompaniment to the landscape’s lush beauty.

Over the past 17 years, Dave Poos has composed this symphony of design, color and sound in conjunction with Joan who jokingly calls herself “the weeder in chief” but has been an active participant helping the garden to flower.

When Dave Poos retired from a career in information technology in 2002, neither Dave nor Joan could claim to be a gardener. Their efforts, Dave jokes, were limited to one tomato plant and a couple of flowers. With time on his hands, Dave was looking for a way to get physical exercise and at the same time have something to show for it. Gardening seemed like a good outlet. “It was a way to get physical exercise and see tangible results,” he explains.

To make his garden grow, Dave bought a box trailer and hauled in blended soil from St. Louis Compost. Wheelbarrow by wheelbarrow, he dumped the dirt into his back yard to create beds. To decide the optimum places to dump that dirt, he laid out the beds with a garden hose. But without his secret gardening tool, Dave’s garden would have none of its vibrancy.

To provide grace and beauty, Dave designed with the aid of a French curve. Long employed by draftsmen and dressmakers, French curves are templates made of wood, metal or now plastic to create graceful lines linking three points on a graph. During his career, Dave had used them for statistical work. Used in gardening, those curves gave the beds he laid out rhythm and flow. “There is a beauty in a French curve that goes beyond an ordinary circle or ellipse,” he says. “I would lay a bed out with a hose, go up on the deck and look and if something was too wide, I would make it a bit more narrow.” “It was fun to come home from work to see a pile of dirt in the yard. Dave would say, ‘What do you think of this’” recalls Joan, who did not retire until 2008.

Working from the sides of the lot inward, the beds took shape. The yard was shady enough that Dave and Joan had for years struggled with grass. Learning that hostas grew in the shade, they began to collect those leafy favorites of all shade gardeners.

To increase their knowledge, they joined garden clubs and took classes. They learned by trial and error and from other gardeners. “Gardeners are generous with their time, expertise, knowledge and often their plants,” says Joan. They went on countless garden tours to see what other people had done. “I am a great believer in plagiarism,” Dave says with a laugh, “I like the idea of seeing a good idea in another garden and seeing if you can incorporate it into yours.”

Dave and Joan made other decisions that made their garden magical and could enhance almost any garden. “The very first thing we did was to remove several elements we didn’t care for. We had a line of white pines that were past their prime and didn’t contribute anything, so we took them out,” Dave says

To create interest in a yard that was basically flat, Dave stacked up wheelbarrows full of dirt to create berms. “Berms have multiple benefits,” he explains. “They add definition, because they are higher; they allow plants to not get water logged, and they bring flowers closer to the eye-level of people walking in the garden.” When beds got too wide, they added pathways through the center.

In the midst of creating their shade garden, the couple lost a large oak tree and suddenly, where there had been shade, the sun beat down. At about that time, Dave attended a lecture on hybridizing sun-loving daylilies by gardening expert Jason Delaney, then with the Missouri Botanical Garden, and the couple added a passion for daylilies to their love of hostas.

In addition to the nearly 900 different daylily cultivars in their garden, Dave and Joan also have a nursery of 1,500 daylily seedlings they have cross pollinated in an attempt to see what new and interesting blossoms they can create. All are numbered. Dave does the pollinating and Joan keeps track of each seedling on a spread sheet. “It takes about three years for a seedling to reliably produce a distinctly different flower,” Dave explains. “This is basically a collector’s garden,” he points out. “But you can’t have row after row of plants. That makes it look like a farm. You have to make a garden pleasing to the eye. Nice curves and manicured edges are important.

“You have to add hardscape and statuary and transitional plants,” Dave continues, pointing to the azaleas, astilbes and ferns in their garden. The couple also have tucked everything from a large, intricate metal sculpture, created by a welder on The Hill, to bird houses and a charming gaggle of ceramic geese to their beds.  “Every bed needs to have some focal point,” emphasizes Joan.

What began as a way to get exercise in retirement has turned into a passion for both Dave and Joan. It has opened up new worlds, created hundreds of new friends and acquaintances and brought visitors from around St. Louis and the nation to their backyard. Both the Missouri Botanical Garden and national gardening organizations meeting in St. Louis have made the Poos’ garden a “must see” tour stop.

While in the beginning creating the garden was a full-time job for Dave and later Joan, the couple now spend much less time in their garden, devoting more time with their three grandsons and enjoying a newly developed passion for duplicate bridge. It is a joyous garden that they can and do manage on their own with time for other things.

“One thing we continually hear when people see our garden is that they see things they can do in their own yards,” says Dave. The fact that they are now providing inspiration for other gardeners, the couple considers a happy, additional bonus.