Is it time for this classic plant to make an appearance in your garden? Read through these local landscapers’ favorite varieties to see which will work best in your space. 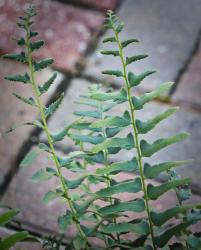 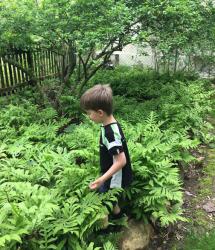 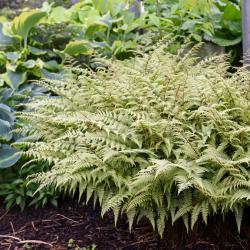 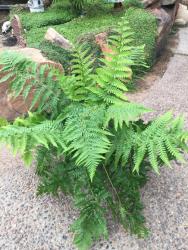 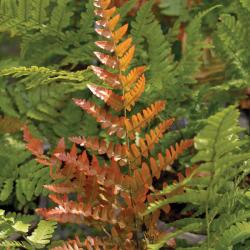 Polystichum acrostichoides, also known as “Christmas fern,” gets its name because its green foliage lasts all the way into the winter months, and it has a mitten-like leaf shape. This is not typical of most native fern species, so its foliage has been traditionally used as Christmas decor. It is a great addition to the landscape because it maintains winter interest as many other plants are dying back. Compared to most ferns, the Christmas fern can tolerate a bit drier soil conditions and more sunlight than most. It thrives, however, in moist soil and lower light conditions. In its natural environment, it grows on forested hillsides typically near rivers and streams. This Missouri native is a wonderful choice to help combat soil erosion. Its foliage is utilized by ground-dwelling birds for nesting and shelter. Christmas fern divides well at the rhizomes, so propagation of this plant is rather manageable. This is a very common fern in the wild and spans all the way from Nova Scotia to Mexico — showing its true versatility.

Water: Prefers rich, moist soils, although it can tolerate slightly slightly drier soil than most ferns.

Location + Light: Performs best in low light to partial shade, 6 hours or less of sun is preferable. It is very successful as a mass planting on a hill, border gardens or native shade gardens.

Fertilizer: Fertilize while it is being established in chosen site, but after that it does not require fertilization throughout the growing season because it is well-adapted to the soil and climate in our area.

Dividing Tips: This plant can be divided successfully at the rhizome and propagation is quite manageable.

The “Sensitive Fern” Onoclea sensibilis does well in St. Louis in organically rich, well-drained soil. It refers part shade to full shade and grows two to three feet tall. It’s called sensitive because it does not like to dry out and early to hibernate with early frosts. Ferns are tough plants, but they generally have sensitive foliage and need regular watering. They’re great for shady, wet areas where turf doesn't grow well. Richard Poynter,  Poynter Landscape, Architecure & Construction.

This vigorous western U.S. native, known as the Robust Fern, is widely adaptable to any shady, cool and moist spot in the garden or woodland. It’s fairly compact selection with long, leathery, emerald green fronds that are upright and stately. It produces a flush of new, deep green fronds each spring. Because it is semi-evergreen, it retains its foliage well in cold weather. David Sherwood, Sherwood’s Forest Nursery.

Our favorite fern is the Dryopteris eryrhrosora “Brilliance,” which is known for bringing multi-season garden interest. Pink fiddleheads unfurl to reveal beautiful, coppery fronds that will then develop into a dark glossy green and remain well into winter. This plant will provide a colorful tapestry to enjoy from spring through fall.  Sarah Riley, Bowood Farms.