A Garden of Possibilities

Colors and textures weave their wave through this Webster Groves garden. 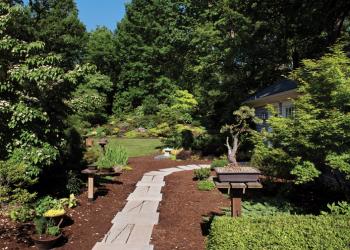 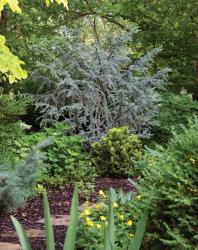 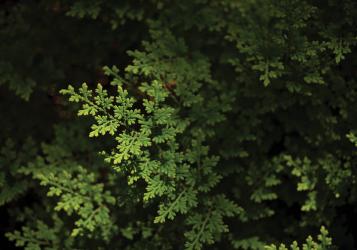 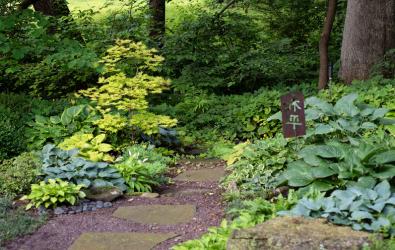 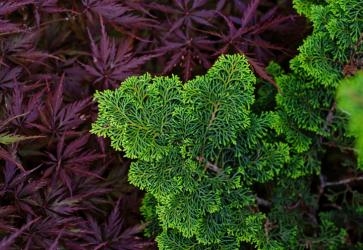 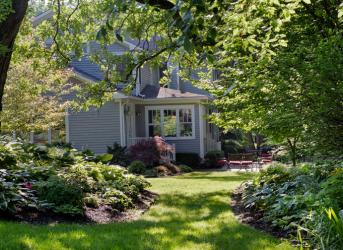 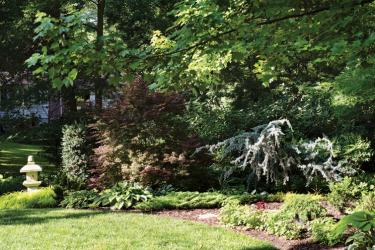 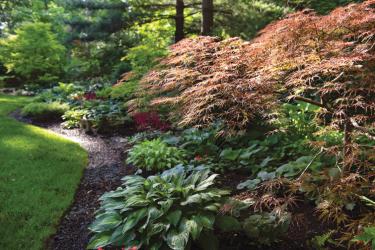 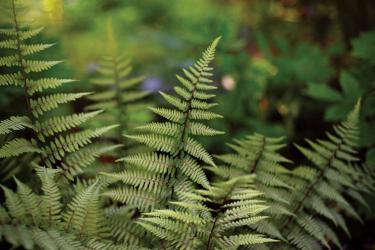 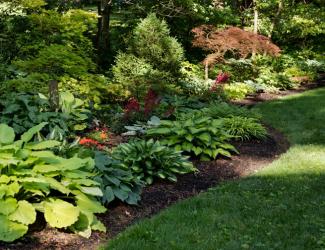 “I look at every loss and mourn; then I look at that loss and see it as an opportunity to try something new.” True to her word, it was the loss of two huge oak trees 10 years ago that transformed Martha LaFata’s Webster Groves garden into the lush, green showplace it is today. Spreading over an entire acre, the primarily shaded landscape appears as a verdant ocean animated by wave after wave of undulating beds filled with over 300 varieties of hosta, untold astilbes, numerous ferns, delicate Japanese maples and finely-textured conifers. With multiple aspects to explore, the garden seems to go on forever and has become a garden tour Mecca for local visitors, including members of the Missouri Botanical Garden and national gardening organizations meeting in St. Louis.

When those trees had to be taken down, Martha had already been gardening on her one-acre property for 30 years. From the start it was an adventure. Thickets of honeysuckle and nondescript shrubs surrounded her 100-year-old home. “It was totally overgrown,” she recalls. “You couldn’t see the house from the road.” As she cleared the land, she uncovered horticultural treasures. “The house had been owned by a botanist, but she had been in poor health. There were many nice old plants — things you couldn’t find in nurseries at that time. I used a Wayside Garden catalogue as a guide to try to figure out what things were. There were a lot of bulbs and spring ephemerals (which die back in hot weather) in the garden. I discovered epimedium (a delicate, shade-loving ground cover with the common name “bishop’s hat” from the shape of its leaves), which is more common now than it was then. It was exciting.” Included in Martha’s discoveries was the revelation that what she considered an ugly, euonymous-covered hillside in the backyard had once been a terraced garden.

The loss of the trees transformed the yard in more ways than one. The heavy equipment needed to cut up and discard the trees destroyed the courtyard area between the house and the garage. Different spaces opened in the back of the yard and Martha knew she needed additional plants.  “It was a good excuse to start something new. I started getting involved with the Hosta Society, and I met two gardeners who lived nearby,” she recounts.

The gardeners turned out to be Jean Hudson and Pat Payton, whose beautiful, hosta-filled Webster Groves garden is an institution. Living up to their notorious generosity, they took Martha under their wing. “So many plants in my garden came from them,” she says. “I bet half of my hostas were first theirs.”

As well as plants, the two gardeners contributed inspiration. Jean was at the house one day when Martha was complaining about all the maintenance involved in reining in the euonymous hillside, which she considered ugly. Jean suggested getting rid of it. When Martha protested, citing all the work involved, Jean countered, “How hard can it be?” Martha recalls, “She went and got a shovel and started digging. The two of us tore out the first part.”

The shady half of the hillside now has giant hostas. On the sunny half of the hillside, Martha planted different combinations of dwarf conifers, lace-leaved Japanese maples and lots of peonies. She cites fellow Hosta Society member Bruce Buehrig as helping to inspire her with his expertise in small conifers. “I like to play more with color and texture than with flowers,” she says.

Her degree in art, expertise in photography and innate sense of design has allowed her to instinctively integrate foliage colors and textures into her lovely, flowing landscapes. She also has taken numerous classes at the Missouri Botanical Garden. “It’s basically using the principles of good design,” she says. “It’s sort of paving with plants, plus I can always pick things up and move them if they don’t work out.

“I have always loved almost anything Japanese,” Martha adds. “I made a trip to Japan about eight or nine years ago with one of my daughters, and I went to as many gardens as I could. I like to think that my garden has a little Japanese influence.” She also tours as many local gardens as possible, laughing that garden tours “can be dangerous” in terms of wanting to do new things in your own garden.

She is particularly fond of “Full Moon,” a small Japanese maple featuring leaves with rounded centers circled by radiating points which emerge gold, then turn chartreuse in summer and red and orange in fall. She also is partial to low-growing, shade-tolerant Japanese forest grass, which comes in gold, variegated and green varieties.

Favorite local nurseries she visits to add to her plant collection include Timberwinds Nursery, Greenscape Gardens, Rolling Ridge, Garden Heights Nursery and Maypop Garden Shop. In addition, she occasionally travels to Springfield, Illinois, to a nursery specializing in Japanese maples.

Martha does 99 percent of the work in the garden herself. While her husband Paul occasionally helps with the heavy lifting, “he is a golfer and I prefer he saves his back for golf,” she says with a laugh. “I used to play a fair amount of golf, but I would rather do this,” she says with a wave of her hand toward the garden.

In the spring and early summer, she can spend as much as 40 hours a week in her yard. “I don’t want to feel like I coulda’, woulda’, shoulda’,” she explains. She is generally up between 5:30 and 6 a.m., when it is light enough to take her Norwich Terrier Pippa for a walk. “Then, I get to it. The garden is never finished. There is always something that I am trying to get right; spaces I am trying to fill in when something dies, or something that gets twice as big as expected.” To keep weeds down, she uses a lot of mulch along with a lot of hand weeding as well as amending her soil with homemade compost.