From daylilies to hostas, Chick and Bruce Buehrig share their garden and gardening knowledge 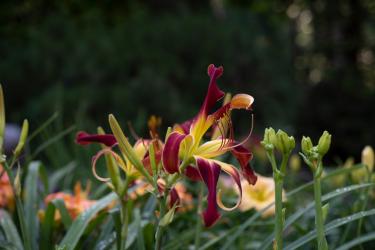 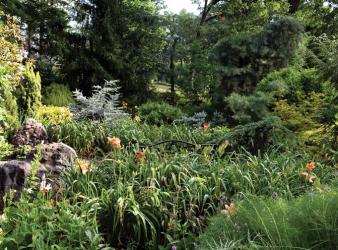 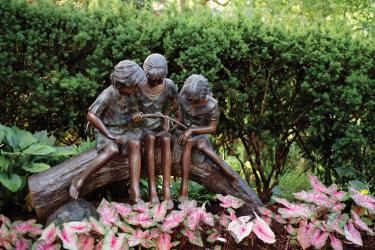 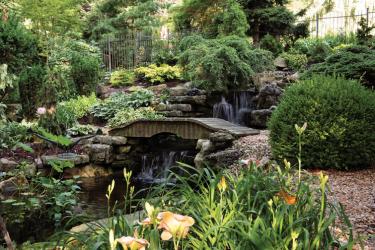 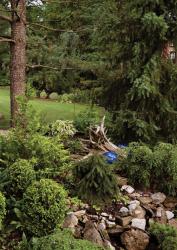 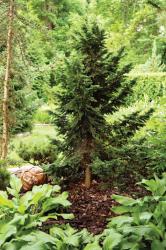 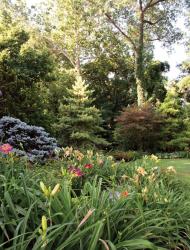 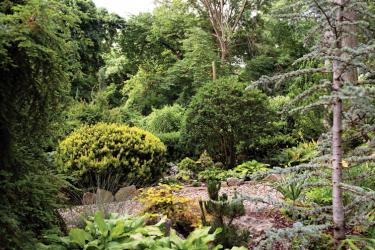 If there was a national gardening organization meeting in St. Louis during the past 25 years, chances are they made a visit to the stunning, two-acre hillside garden of Chick and Bruce Buehrig in Bellerive Acres. Be the groups favoring hostas, daylilies, daffodils, Japanese iris, conifers, perennials or just gardening in general, the Buehrigs have shared their plants and their knowledge of how to grow them with those visiting St. Louis. They have been equally generous with local garden clubs and community organizations.

Both their garden and their knowledge have been built literally from the ground up. When the couple purchased their home in 1973, their favorite outdoor activity involved golf rather than gardening. They loved the neighborhood for its spacious yards, mature trees and proximity to a nearby bird sanctuary. Even though they weren’t avid gardeners, they happily accepted a “welcome to the neighborhood gift” from a Mrs. Hamm, who showed up at their front door.

“She brought us a hosta,” recalls Bruce. “She told us that she was bringing us a plant that would grow in this shady neighborhood.”  Mrs. Hamm turned out to be the grandmother of a Jon Hamm, who eventually became a famous actor and whose parents lived nearby.  “It was the first thing we planted. She didn’t know the name of the hosta so we’ve always called it the ‘Mrs. Hamm Hosta’.” The fact that it was the first of 900 other hostas that would eventually be planted in the yard would have stunned them at the time.

In those days their yard had so much shade, grass refused to grow. “Bruce only had to cut the back yard twice a summer,” Chick recalls. That was a good thing as the yard sloped sharply downhill toward a creek bed at the bottom of the hill and mowing was not an easy task. One area of the hillside also turned out to be a conduit for water racing from the top of the property to the creek bed, creating enough erosion that a large gulley formed. On top of that a number of the mature trees on the property reached the end of their natural lifespan and began to die and with them their roots that held the soil in place. Furthermore, a lack of tree cover meant more sun and more grass to mow.

With their large yard calling to them and a decision made that they could no longer play golf, the couple gravitated toward gardening as an outdoor activity they could do together. To solve the erosion problem, they created a 200-yard, rock-filled dry streambed to absorb and channel the runoff water. A flagstone path solved the problem of getting a riding lawnmower up and down the hillside to cut the additional grass. Those two hardscape features ended up dividing the yard into separate planting areas. Together, they worked with contractors to bring in rocks and create streams and waterfalls. Conifers were added for winter interest and color and Japanese maples for their architectural shapes and spring and fall foliage color, which can be as brilliant as any flower, Bruce notes. And, of course, there were hostas. Inspired by their first “Mrs. Hamm Hosta” and all that shade, Bruce quickly became a hosta expert and went on to jointly found with Brad Shanker the St. Louis Hosta Society.

To add to their knowledge, the couple haunted the Missouri Botanical Garden to start taking classes, walking and observing. On one particular walk through the garden, the daylilies were in full bloom. “It was just beautiful,” Chick recounts, recalling her enchantment with the showy, colorful flowers. Toiling away in those beds, Chick encountered an elderly man whose wife was nearby in a wheelchair. The couple was Ed and Mary Schnarr. Ed shared some of his daylily knowledge with the fascinated Chick and mentioned that there was going to be a daylily sale at the garden in September, where Chick could purchase some lovely plants. “He also mentioned that he could use some help,” Chick says.

Chick did not have to be asked twice. She joined the West County Daylily Club and started volunteering in the daylily garden, where she has been a stalwart for the past 30 years. Proud of her continued efforts, Bruce notes that she is part of a group of six people who have raised in excess of $275,000 for the garden through daylily divisions and sales, with the proceeds going toward projects identified by the horticultural staff at the garden.

In their own garden, their passions have created a comfortable division of labor with Bruce concentrating on the shady spots and Chick handling the sunny areas. As limbs died and trees fell, Chick has appropriated every additional ray of sun for her daylilies, which now number over 800 different plants. Some begin blooming by the end of May while others can bloom as late as August with rebloomers continuing into fall.

The wide variety of daylily colors and differing shapes first captivated Chick. “They come in every color except supposedly a true blue,” Chick says, “but depending on the light, some of them can look blue. They like two things: sun and water.” “If you don’t have a heck of a lot of either one, they will still perform for you,” Bruce interjects. They also are relatively disease and pest free. “It is hard to kill a daylily,” both agree.

If there is a downside to daylilies, it is, as the name implies, the blossoms last only one day but there are always other buds ready to open. To keep their garden looking its best, the Buehrigs deadhead the spent flowers each evening. In the height of daylily season in June and July, it can take the couple three hours apiece to deadhead the 800 plants. “It is a nice way to see the flowers and the next morning everything looks new,” Chick affirms.

While the daylilies are Chick’s babies, Bruce is equally as enthusiastic when it comes to their daylily deadheading operation. “For us it is enjoyable. It gets you into the garden and seeing all the plants. For us, it is always wonderful to be in the garden.”