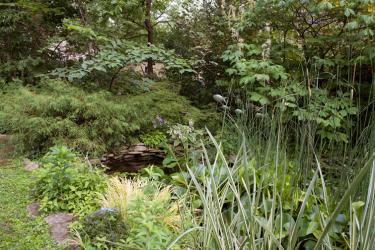 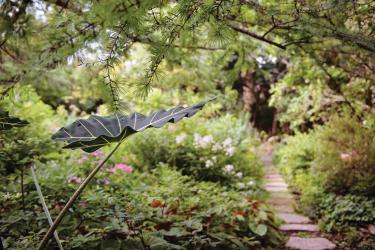 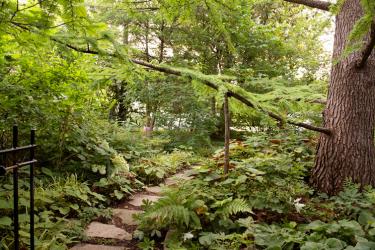 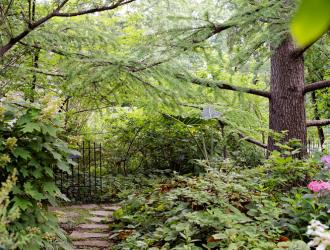 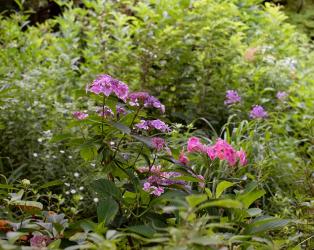 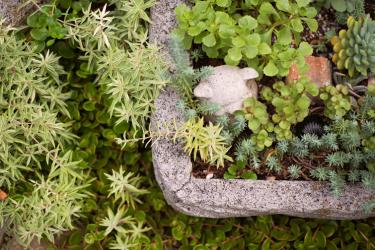 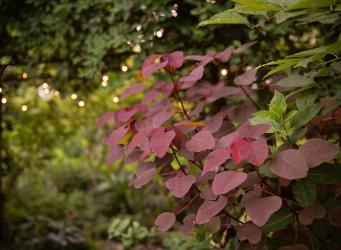 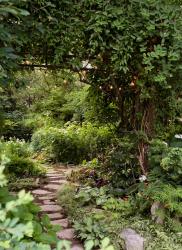 From the time she began interning at the Missouri Botanical Garden in 1974 until she retired two years ago after 20 years as the head of the Garden’s Kemper Center for Home Gardening, June Hutson has been tending plants, loving them and keeping them healthy.

In her capacity at the Kemper Center, she oversaw the design and maintenance of 23 backyard-sized gardens so that the Botanical Garden’s more than one million annual visitors could envision how a wide variety of annuals, perennials, shrubs and trees could fit into their own landscapes. Demonstration garden styles range from vegetable and bird gardens to rolling prairie and compact, city-sized gardens. In addition, June’s resume includes writing books, teaching classes and sharing her love and knowledge of gardening via print and broadcast media.

Nowhere, however, is her love of plants more evident than in her own Kirkwood garden, which she has tended since 1994. It is a garden that bears the stamp of two of this area’s most distinguished gardeners. Initially planted in the 1940s by the late Edgar W. Denison, the landscape continues to reflect the imprint of the conservationist, amateur botanist and naturalist. He was an early advocate of using native plants in cultivated landscapes and preserving and restoring biodiversity. Denison’s book, "Missouri Wildflowers," is now in its sixth printing.

Denison was extremely active at the Missouri Botanical Garden, and he and June developed a firm friendship. He was quite elderly when he became ill and died in 1994. “I had been looking for a house for a long time and I hadn’t found anything,” June recalls. “When I heard about Edgar passing away, I contacted his nephew, a doctor who lived out-of-town, about purchasing the property.” While the house needed repair, “I didn’t want the garden to go without someone looking after it.”

Since 1995, June has been the custodian of Edgar Denison’s gardening legacy. Like any homeowner, her first chores involved refurbishing the home’s interior.

While she did that, she took time to simply observe the garden. While “some of the things had gone back, I wanted to preserve the bones of the garden because an awful lot of what he had here was really good stuff."

When it came to good stuff, a case in point was a huge, rare, golden larch tree that occupied a major part an adjacent half lot that was owned by Denison and therefore part of the estate. A deciduous conifer, native to China, with soft, needle-like foliage that turns gold before dropping in autumn, the tree is one of two known daughters of an offspring of a golden larch brought to St. Louis as part of the Chinese exhibit for the 1904 World’s Fair. Its sibling stands outside the Sachs Museum Building at the Missouri Botanical Garden.

“I probably bought the house because of that larch,” June says with a smile. The pathway that Denison created to encircle the larch continues to be in use although June has replaced the old grass path with stepping stones. She carefully tends the plants beneath the larch to avoid as much as possible disturbing the ground and surface tree roots.

One additional tree on the property that inspires awe is the double trunked, documented, 275-year-old post oak in the front yard. “Can you imagine what that tree has seen?” she marvels.

The age of the garden also is responsible for other gardening wonders such as the yew trees that form the outer-most border along the extra lot. Twisted and gnarled through years of natural growth, the yews rise to the height of small trees that show little resemblance to the highly pruned shrubs in most gardens.

From the earliest flush of spring when the garden is white with the naturalized bulbs of snowdrops (Galanthus nivalis) and spring snowflakes (Leucojum vernum) to the purples, reds and oranges of the Missouri natives in fall, June’s garden continues to reflect Denison’s deft touch. But she also has made her own gardening imprint. A brick patio ringed with containers allows June to capture what little sun comes into what is primarily a shade garden and grow herbs, succulents and annuals. She also contributed a small pond nearby to bring the sound of water into the garden. While the garden was created to highlight native plants, “Edgar wasn’t a purist and neither am I,” June emphasizes, noting that both of them include interesting plants that are not native to this area in their gardens.

During her many years of advising home gardeners, June has compiled a list of suggestions based on the most common mistakes people make in their own landscapes. “Gardeners should pay more attention to the instructions on the plant tags,” she emphasizes, taking particular note of the amount of sun or shade a plant needs and also to the dimensions of the height and width of a plant at maturity. “People buy things and then discover they get way too big for the spot they planted it. Paying attention to the tag is tantamount to success or failure.”

Pruning can be another common mistake. People prune at the wrong time of year, such as cutting back spring blooming shrubs early in the season and loosing that year’s flowering. She urges gardeners to go to the Missouri Botanical Garden’s Gardening Help website to learn more about how to prune and care for individual plants.

“People also don’t realize the importance of the condition of their soil in gardening success,” she notes. “The University of Missouri Extension Service provides soil testing services for home gardeners. Also, all plants need oxygen; it is one of the main ingredients for growing plants. Just loosening the soil with compost and manure can give a plant the air it needs.”

When it comes to container gardening, for best results gardeners should use a soilless mix, she suggests. “Because the plants will be grown only for a short period of time in a tight space, it is okay to plant things closer together than you would in a garden.” To create full containers quickly, she likes to nip off top leaves to make plants bush out rather than becoming tall and leggy.

She currently has a couple of favorite perennials that she would not be without in her garden. Aralia racemosa (American Spikenard) is a native that features spectacular white flowers followed by purple berries and grows quickly from nothing to three feet tall and wide. It grows in part shade to shade and fills in a lot of space quickly, June notes.

Heuchera villosa ‘Autumn Bride” features large gray-green smoky leaves and is a favorite because of the preponderance of shade in her garden. Grown for colorful leaves, Heuchera villosa cultivars seem to do better in our heat and humidity than other heuchera cultivars, she feels.

When it comes to annuals, angelonia is a summer favorite. With flowers that resemble tiny snapdragons, angelonia loves sun, comes in a variety of pastel colors, and thrives in the heat and humidity of St. Louis. “I use a lot of it. It is a just a beautiful plant that looks like a wildflower,” she says.