The Music of the Garden

Florissant garden is a treat for both eyes and ears. 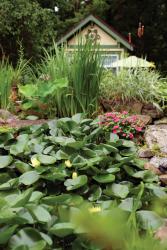 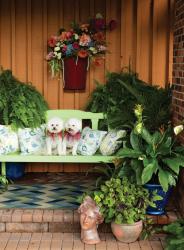 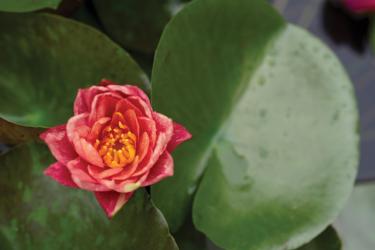 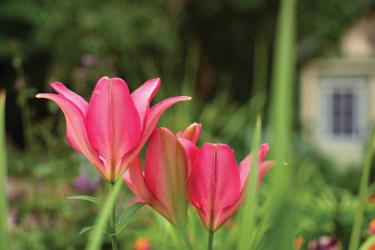 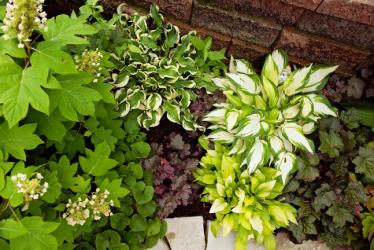 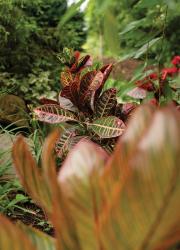 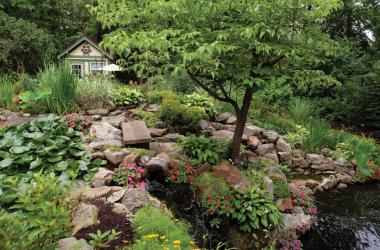 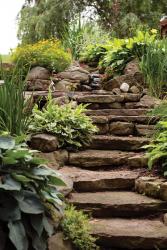 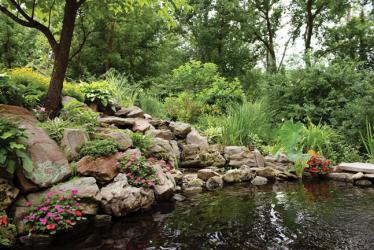 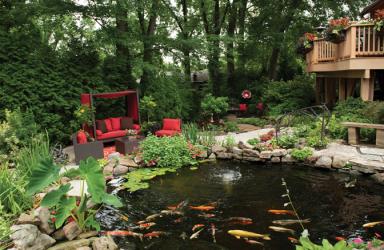 Sticklers for the English language would argue that gardens couldn’t compose music or sing. But then they wouldn’t have been to Ginny Mueller’s garden. It harmonizes with the land via streams that spill down the hillside with boundless joy and hums quietly in pools filled with colorful koi. It trills to the tune of a landscape interspersed with five fountains. There are crescendos in the stone steps that climb the hillside and staccato notes in the sharp boulders that give the garden its definition.

A rhapsody of vibrant color swirls from the garden beds to the outdoor living spaces. Whimsical ditties seem to hover around the charming, dollhouse-like garden shed. The whisper of woodwinds is present when the breeze ruffles feathery evergreens and draping branches. Cool jazz seems to emanate from the sophisticated outdoor living room at the base of the hillside.

Not only does the garden make its own song, Ginny’s love of music ensures that anyone who steps into the garden is immediately enveloped by whatever recorded music she is playing that day. Four speakers, placed throughout the landscape, invite visitors to instantaneously make the connection that this is a garden not only for the eye but for the ear.

To anyone who might look at her landscape and see it as a huge project, Ginny is quick to point out that the garden has been 40 years in the making. When she and her husband, Ray, purchased their Florissant home, they were living in St. Charles. Ginny was an elementary school teacher, where music was a part of her curriculum. In a subdivision of only 25 homes, the property backed to over 50 acres of common ground. “We looked at the house on a freezing cold winter day with snow on the ground. When I walked through the front door, I could see right through the house onto the deck and into the woods,” she recalls. The couple fell in love with the feeling of spaciousness the property offered

At the time, the house was only six months old and the yard was a blank slate, she adds. “The back yard had a slope to it and there were these “beautiful” old railroad ties to hold back the water that was coming in from the street. The whole back yard was filled with cottonwood trees.”

The garden started small with the couple doing their own landscaping. In time they added a small pond and “gardened around it. Then, we expanded it and we expanded it again,” she recounts, calling in Land Works to do the literal heavy lifting of creating and expanding streams and ponds. More recently, Caleb and Josh Bauer of Bauer Falls help tweak and maintain the project, which now consists of an upper bog pond filled with waterlilies and a lower koi pond. Two streams flow down the hillside and a natural stone bridge links both ponds.

The garden now covers nearly an acre, according to Ginny, who has continued to maintain it following Ray’s death in a tragic road accident in 2010. Ginny credits the music of the garden with helping her get through the terrible period in the immediate aftermath of Ray’s death.

The couple had previously committed to their garden being featured on the 2010 Pond-O-Rama garden tour sponsored by the St. Louis Water Garden Society and plans for the tour were far enough advanced that it was too late to cancel. Friends and family jumped in to help in the final stages of getting the garden ready for the tour.  “I put on music and I dug, and I planted,” Ginny recalls. “So many people offered to assist me. It was healing to be in the garden and have music throughout the garden.”

Even now, garden music continues to be an inspiration. “If I have to put down mulch, I want something that keeps me moving,” she says with a laugh. “If I want to think about things, something softer and more meditative gets me back on track. “

While Ginny’s love of music is a dominant theme in her garden, her love of color strikes an important note. Her choice of flowering shrubs, perennials, vivid annuals and outdoor ornaments celebrates the feast for the senses that encompasses her orchestrated hillside.  “I love color in my house, I love color in my clothes and I love color in my garden,” she affirms.

Her third love, plants, ensures her garden is never static. "I love going to garden centers, finding something new and looking for a place to plant it,” she says. As much of her garden is in shade, hydrangeas, hostas, astilbies and ferns, some from Ray’s Aunt Tillie’s garden in Litchfield, IL, are favorites.

“People should not be intimidated by doing anything in the garden,” she says. “I am not one of these people who has 2,000 varieties of one plant, and everything labeled. Gardening has to do with trial and error, creativity, patience and trust; trust that plants will come back and the ability to experiment and change things up. Winter is like a blank canvas and in comes spring and everything changes. The garden is beautiful in the snow but even then, it changes every day. As the seasons go on, there is always something new and different, even if it is just a different blossom or a fish jumping.”

The changes in nature are a constant inspiration for her to do new things herself, she says. “I always think I have done everything I am going to do and then every year, I end up changing up what I can and what needs to change up.”

She loves the water features in her garden for the beauty, tranquility and soothing sounds they provide. “Water is healing,” she believes. She encourages others to make water a part of their gardens and partake of its benefits. “A water garden doesn’t have to be big,” she emphasizes. “Small ones are very manageable. You can do it yourself. The St. Louis Water Garden Society welcomes new members, has speakers and shares information. There are so many resources out there for people to try and use.”