The Blossoming of a Garden, Trial & Error 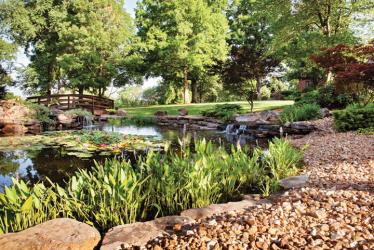 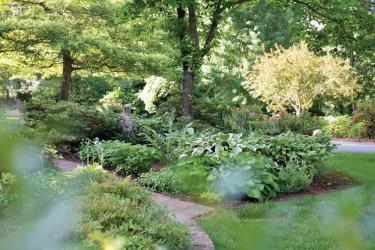 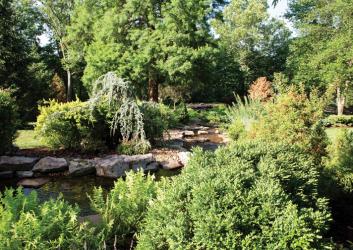 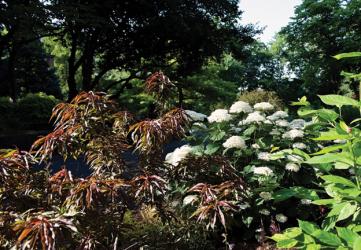 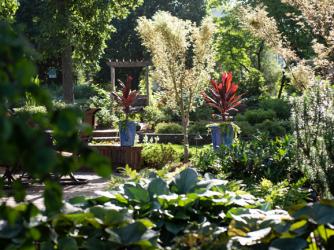 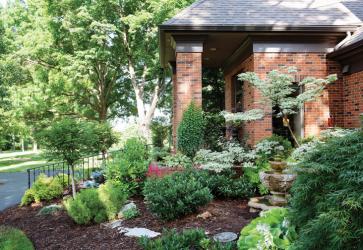 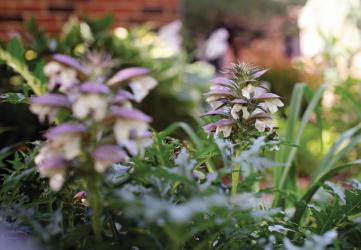 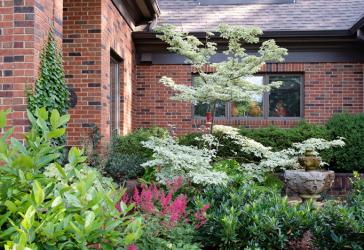 Creating beauty, attracting wildlife and sharing with family and friends is what gardening is all about for these Kirkwood homeowners.

Their garden also represents continual learning, trial and error, not being afraid to try something new and, above all, patience. The story of the garden begins in 2002, when the couple, then living in Chesterfield, found just the right place to resettle after a long search.  The nearly 3-acre Kirkwood property came with a window-filled brick home surrounded by mature oaks, sugar maples, walnuts, bald cypresses, dogwoods and included a red oak and catalpa now certified to be over 100 years old. Those trees were “an important piece of the "puzzle” that made them determine that the property was the right fit for their family that included three children.

The remnants of an old pond remained on the property and provided a bit of a teaser as to what the acreage could someday include. For a time the homeowners, busy with three growing children, lived with the land and made slow improvements.

“The first five years it was just a matter of cleaning up,” she explains. While they treasured the large mature trees, the scrub saplings and invasive shrubs needed to go. As they began to reclaim the land that surrounded their home, they could see the possibilities more clearly. What came into focus was the vision of a flowing stream and adjacent ponds that somewhat followed the natural contours of the grounds and gave a historic nod to the pond that had once been part of the property.

Rather than simply hiring a company and letting them create a water feature, the couple researched water gardens, bought tickets to the annual Pond-O-Rama, water garden tour sponsored by the St. Louis Water Garden Society and talked with the pond owners. The 2008 decision to build a water feature also led to a division of labor between husband and wife. The husband took over designing the ponds and stream. He contracted with Land Works, Inc., to create a waterfall flowing into a 100-foot by 8-foot meandering stream and a double-lobed pond. An arched bridge ties the two wings together.

Meanwhile, with their last child ready for college, the wife took the Master Gardener course at the Missouri Botanical Garden, then joined a garden club and began taking every course she could find at local nurseries to increase her gardening knowledge. She focused on creating the beds surrounding the house and those that followed the path of the stream and ponds. “Once I decided on basic bed areas, I’d go to different nurseries to get ideas,” she explains. Favorite haunts became Greenscape Gardens in Ballwin, Sugar Creek Gardens in Kirkwood,  Bowood Farms in St. Louis City and Schmittel’s Nursery in Maryland Heights.

Little by little the garden took shape. “We started with the bones,” she explains, “crabapples, rhododendrons, boxwoods. We did things little by little. It was trial and error. We made mistakes and we moved things around a lot.  “Gardening,” she laughs, “is a very forgiving hobby. If you plant something and it doesn’t work, you can dig it up, rearrange things and try it in a new spot.”

Her goal was to begin with basic trees and shrubs, let them fill out and then plant other things around them. She was cautious about cramming too many plants together and having beds become overcrowded and messy as the plants matured. Maintenance also was a consideration as the couple did the day-to-day work themselves, calling in help only for major projects. Miener Landscaping, Timberline Landscaping and LMI Landscaping have filled those needs.

The effort in creating the garden, especially the pond and stream, have more than paid off in the wildlife they attract, and the joy they bring to the couple’s seven grandchildren ranging in age from 8 years to 3 months. “We have so many birds; a pair of blue herons, a mallard couple that come each spring, wild turkey, coyote and fox. Deer (that live on adjacent vacant land) come and drink from the ponds,” she says.

The grandchildren actually swim in the pond, she adds, using a sloping, beach-like entry to a shallow area. In the summer they delight in the fish, tadpoles and peeper frogs that fill the nights with their song.

In the process of trial and error in the creation of the garden, the knowledgeable gardening wife has compiled an outstanding list of favorite plants she feels add a special dimension to her landscape. She shared some garden notes with us.