Where most may see a simply gorgeous garden, the Plahns saw colorful possibilities. 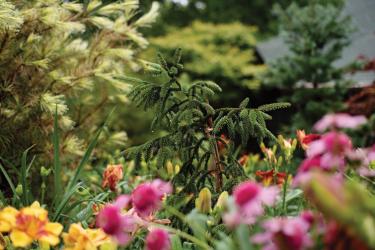 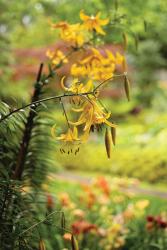 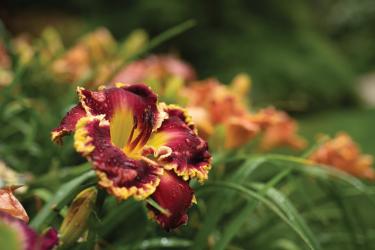 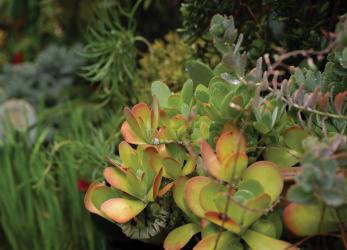 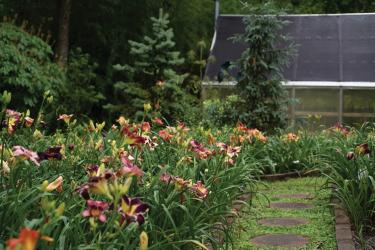 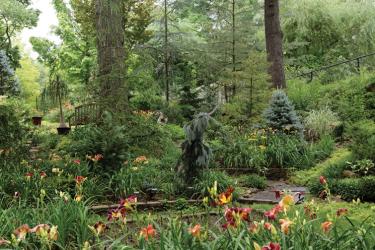 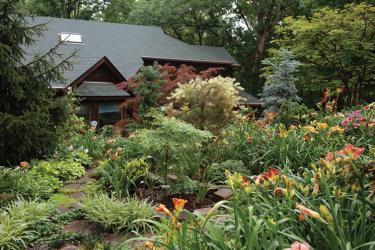 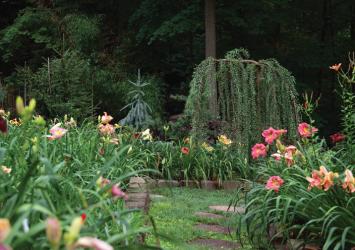 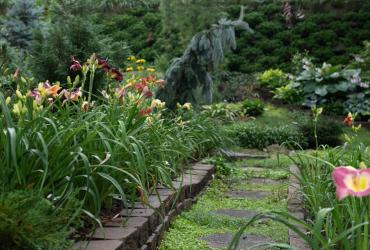 The half-acre that fronts Diana and Craig Plahn’s contemporary home in the heavily forested Sugar Creek Valley in Kirkwood is filled with winding pathways, long stretches of colorful perennials and banks of glowing, green hostas. Retaining walls, spilling over with trailing sedum, resemble fluid green waterfalls. Evergreens, shrubs and small trees with interesting architectural shapes anchor the beds and provide height and structure to the garden. A small stream tumbling over rocks and splashing into a pond filled with waterlilies brings the soothing sound of water into the landscape.

Diana and Craig are not immune to the beauty of the garden they have created. But they also see that lush half-acre as a living display case. The Plahns are admitted plant collectors and among their treasures they count 800 registered varieties of daylilies, between 600 and 700 named varieties of hostas, approximately 275 miniature and dwarf conifers and 32 different Japanese maples. Using their gardening instinct and their sense of design, they have woven their plant collections into a tapestry of living beauty.

You could almost say the Plahns were swept by nature into their passion for collecting. Craig and Diana met in dental school at the University of Missouri-Kansas City in 1980. Both came from gardening families: Diana was raised on a farm; Craig’s parents were avid gardeners. Having house plants in their student apartments seemed natural and was a common bond. Their instructors in dental school, who also enjoyed plants, introduced them to orchids. “It was sort of like, ‘Oh, you grow house plants, well try these,’” Diana recalls with a laugh. “We got married in 1981. We were in dental school, living in a rented house and growing orchids and plant stands. My husband would build the plant stands; we would put fluorescent lights over them, and we would grow our orchids,” she continues.

The couple bought their first house in 1984 near the Castlewood State Park area of Ballwin and Diana had high hopes for a garden. “I quickly learned that this was the beginning of the Ozarks,” she recalls. “One of my neighbors brought me a pick ax to help. The soil was all clay and rocks. We lived there from 1984 to 1989 and finally tried to grow perennials in raised beds.”

In late 1989 the couple jumped at the opportunity to buy over an acre of wooded property in Kirkwood’s Sugar Creek Valley, where preserving nature is the goal of the residents. The property sloped down dramatically, with the lower portion of the acreage in an area that floods regularly. There was a half-acre at the top of the hill, however, for the couple to build their dream home.  “All I wanted to do was live in the woods and grow orchids,” Diana says. The city of Kirkwood had no problem with that, but they did require that the newly built home have a front lawn to qualify the house for an occupancy permit.

Craig and Diana dutifully created and seeded a front lawn and moved into their new home. Then, the rains came. Mud washed over and buried the newly created front lawn. More mud cascaded down the driveway and came to rest against the garage door. That wall of mud was so deep, the couple had to shovel it out to open the garage door.

With no grass to grow under their feet, the Plahns acted quickly. Twelve pallets of interlocking Keystone blocks were on their doorstep by Labor Day and Craig and Diana began building the first of many retaining walls. “When it rained my husband would stand outside with an umbrella to watch the path of the water to decide where to build another wall,” Diana says.

One by one, the areas behind those retaining walls became garden beds and plant display cases. “You couldn’t put grass there because you couldn’t mow it,” Diana points out, so we started adding dirt and amending the soil.”

The couple already liked perennials and found daylilies fascinating due to their beautiful colors and the ease of hybridization. (The couple has 50 registered daylilies to their credit.) Hostas were their plant of choice to grow in the shady areas where daylilies wouldn’t thrive. Craig and Diana became founding members of the St. Louis Hosta Society. While now growers are able to use plant tissue to create clones of a particular hosta under sterile conditions, the group was initially formed to allow hosta lovers to manually divide and share expensive hosta varieties with other members of the group, Craig explains.

Their garden has been on tour when St. Louis has hosted meetings of the national daylily and hosta societies and next June will be on display when the Midwest Conifer Society meets in St. Louis. Diana is the current president of both the Greater St. Louis Daylily Society and the St. Louis Hosta Society.

In preparation for next year’s conifer tour, Craig recently added 30 new conifers to the garden. Both Diana and Craig agree that the conifers and the Japanese maples add year-round interest to the garden through their change of seasonal color and the architectural enhancement of their branching and bark.

Their passion for plants has led them to travel throughout the country to national meetings and form friendships with those that share their love of hostas, daylilies, conifers and Japanese maples. They also are American Orchid Society judges. A greenhouse on a corner of their property houses their orchid collection.

Throughout their garden, decorative touches purchased on their travels or obtained locally illustrate their fascination with oriental objects, gargoyles and statuary.

While their work in the garden and with plant societies could qualify as a full-time occupation, the Craig and Diana both continue to be full-time dentists and have a joint dental practice in Kirkwood.