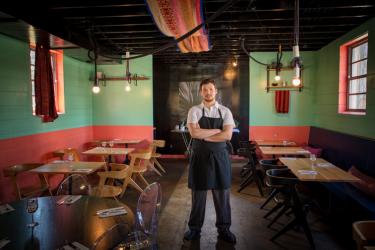 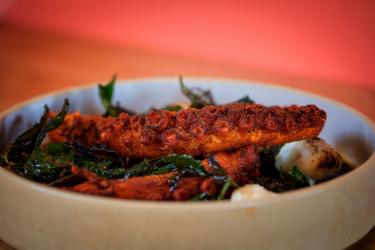 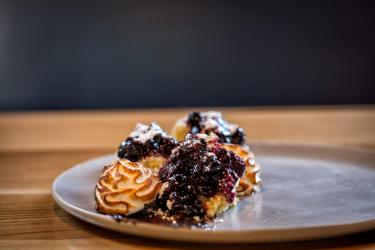 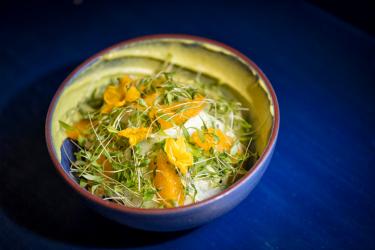 Alex Henry was walking the rows of a St. Louis-area farm in search of fresh produce on the soupy summer day St. Louis Homes + Lifestyles spoke to him about Nixta. It’s an apt analogy, picking a brilliant chef’s brain as he plucks choice specimens from the field.

A native of Mexico and an alum of Vicia, Niche, Brasserie by Niche and YaYa’s Euro Bistro before signing on as executive chef at Nixta, Alex has taken to the seasonal and farm-to-table movements with gusto. He uses local corn to make fresh tamales, tortillas, masa, cheese, beans, pozole and more daily.

Most weeks, his menu changes as he culls his ingredients from the best available on any given day and somehow coaxes out of them South American authenticity. Counterintuitively, he says it’s the self-imposed limitations that have grown him as a chef.

“It’s a level of curiosity I bring to the table,” Alex says. “I use local ingredients as much as possible, not delivering things from somewhere else. Having that constraint, instead of having free reign, forces you to be creative.” On one day, he may use roasted local elderberries atop a pork loin; on another, he’s putting cippolini mushrooms at center stage in vegetarian fare. He hopes soon to have access to locally cultivated huitlacoche, the earthy “corn smut” that is a popular delicacy in Mexico.

This is all not to say that there are never familiar dishes on the rotation at Nixta. Masa in one form or another is practically a given and summer wouldn’t be summer without a tomato-heavy selection. “There’s usually some variation of skin-on pork belly. I’ll confit it and roast it just until the skin starts to dry out, then fry it. The skin puffs up like chicharrons and the inside stays nice and tender.”

Look for changes in operation as well, as the chef tweaks his offerings to better serve his clientele. At press time, Chef Alex was exploring the feasibility of daily chef tasting menus and working to strengthen Sunday brunch. “A lot of what we’re doing is to expand on people’s views of what Mexican food is,” he says. “We’re doing Mexican cuisine based on the perspective of what’s local.”

Cooking School Menu
Heirloom Tomato Sope: There’s more to this bean-topped masa cake than meets the eye. Chef Alex will demonstrate how to cook the frijoles with habanero to coax out the pepper’s singular flavors without over-spicing the dish.

Smoked Brisket Salpicon: “It’s kind of like a brisket salad,” Alex says of this dish. “Shredded meat with citrus juice, cilantro and lots of local radishes.”

Pulpo: Alex serves his crispy pulpo, or octopus, “en su tinta” — in its ink. Or, in this case, in more readily available cuttlefish ink. An easy tomato-onion-cilantro puree accompanies the pulpo, along with rice balls to soak up the sauce.

“Gansito” Style Dessert: Alex describes his take on the mass-produced Mexican gansito cake as a Twinkie on steroids. “A gansito is a sponge cake with cream filling and jam inside and covered in chocolate,” he says. “I put local berry jam in my version, reduced cream and torched meringue. And lots of chocolate ganache.”