You'll be in awe of Jay Laux's glowing green landscape in Wildwood. 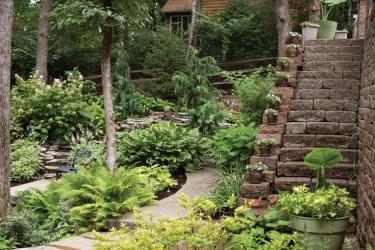 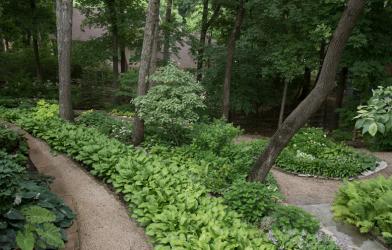 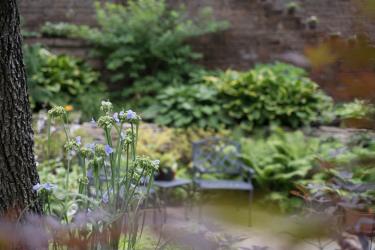 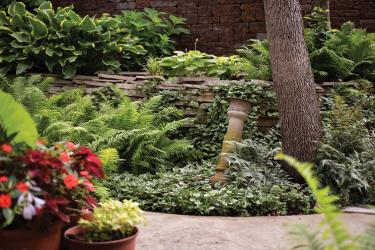 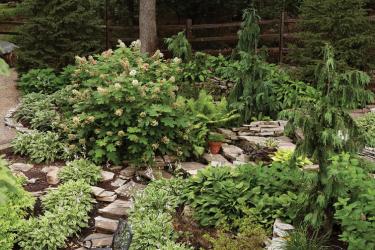 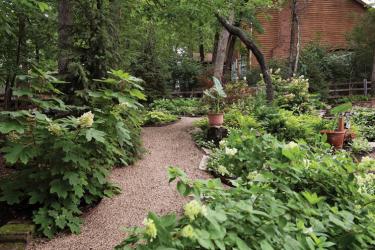 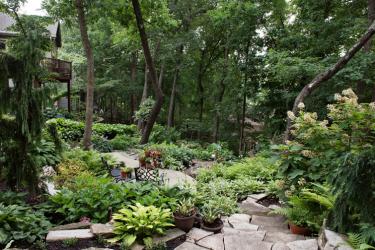 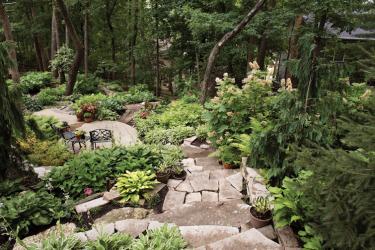 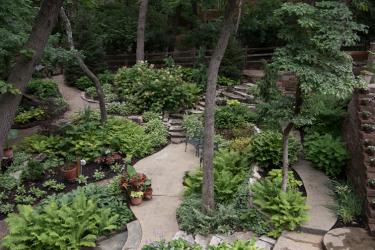 Jay Laux's Wildwood garden can easily be described in multi-syllabic superlatives. But on a hot summer day, when someone steps through the wooden gate and catches their first glimpse of the cool, green glowing landscape, the words you are most likely to hear are "Oooh," "Aaah" and "Wow."

Initially, the builder sodded the back yard. When that sod died, "I went out and bought more sod the next year," Jay now laughingly recalls. "The sod died again. The third year, I went to a nursery and said, 'What do you have that grows in the shade?' I came home with eight Honeybells hostas in one gallon pots."

Those 'Honeybells' sweet-scented their way into Jay's heart. The heart-shaped leaves, bright green color and fragrant blossoms did all he asked of them and flourished in the shady setting. Jay divided those eight, and then divided those divisions and before long there were glowing, green 'Honeybells' throughout the hillside. "I split them umpteen times. I must have 2,000 plants from those original eight hostas," he estimates.

Providing happy homes for all those baby hostas, required more than a bit of landscape engineering. "When we bought the house, I don't think there was more than 10 to 12 feet of level ground," Brenda recalls. In addition, Jay suggests that Wildwood is misnamed and should have been called Rockwood. "You can't plant a petunia without using a pickaxe."

To solve both of those problems and create level and fertile planting areas, Jay brought in two tandem-axle truckloads of one-inch limestone gravel, topped that with landscape fabric and then spread two tandem-axle loads of Missouri bottom soil over the fabric. Stone retaining walls keep the gravel and soil in place.

Gardening on such a grand scale was never something Jay, a retired contractor, planned to do. "My father was a baker and I grew up living above the bakery. Our back yard was gravel. When Brenda and I moved into our first house, I started growing things, but nothing like this."

Two things have spurred Jay on: discovering plants he wanted to add to the garden and needing places to put them. A case in point was an immense hosta that needed to be removed from a client's yard and was so large Jay needed a Bobcat to accomplish the task. Rumored to be called Elegant Splendor or perhaps Regal Splendor, the weight of the dramatically beautiful plant caused the back two wheels of the Bobcat to come off the ground. Several hunks sawed off that plant now grow happily in Jay's garden. In addition to the numerous hostas and ferns, he has added some shrubs to provide winter interest to the landscape. "When you have a perennial garden in the winter you are pretty much looking at a pile of dirt," he jokes. Oak leaf hydrangea, with their interesting branching and peeling bark, lacecap hydrangeas, Norway spruce and Japanese maples add structure to the landscape.

He also has discovered a passion for propagation. Perhaps beginning with the joy of filling his garden with so many decedents of those first eight 'Honeybells', Jay loves taking the plants in his garden, creating new plants and often giving away their offspring. When his hostas throw seeds, he pots them up and either uses them in his own garden or passes them on to garden clubs for plant sales. On flagstone walkways edged in the creeping ground cover ajuga, he directs the ajuga heading out over the flagstones over ice cube trays. As the plant continues to creep and send out tiny roots covering the tray, he can trim back the ajuga and each cube receptacle has become a perfect ajuga plug to insert somewhere else in the garden. In his work area at the top of the garden and underneath the deck off the back of the house, Jay has set up a small plant nursery using clear plastic storage tubs as tiny greenhouses to allow seedlings to gain strength before planting them in his own garden or sharing them with other gardeners.

He is a huge believer in using Hormex Liquid Concentrate in water to minimize transplant shock and to generate bulb production in the elephant ears he uses as accents in the garden. Out of 30 elephant ear bulbs I have probably gotten 250 bulbs," he says. "What I enjoy is reaping the benefits of what I have planted." Although he has an irrigation system installed in his garden, he does not use it daily. "I want the plants to survive on their own whenever possible," he explains.

In an area filled with deer, Jay has managed to confound the marauders by backing his split rail fence with a seven-foot high deer fence. "When it was six feet high, they could do a vertical leap and get over it. I made it seven feet tall and that ended it," he reports with a note of pride in his voice. In unfenced areas, he has become an expert in finding plants that deer ignore: golden tansy, ornamental onion, elephant ear and Russian sage.

Considering the manicured beauty of the landscape and the breathtaking design that links the lush garden together, it seems impossible that one man has created it all. Jay's garden, however, is a one-man show. This year alone he spread 14 cubic yards of mulch. He also concedes that rather than creating additional planting areas, he is using ground cover to green up the far corners of his property, so he is not adding to his mulching chores. The garden has been "pretty much as it is now for the past 10 years," he says.

Jay's greatest joy in his garden is simply sitting and looking at it. Unlike many gardeners who are continually getting up to pull a weed here or cut back a vine there, Jay is not a fanatic. "I can be content just to look at it," he says. "I garden because I want to, not because I need to."