Wildwood homeowners have transformed their lush 23 acres into a haven for horses. 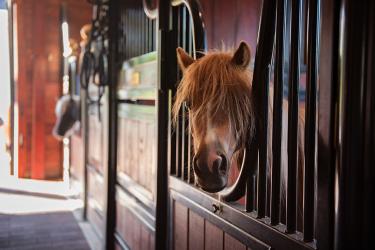 Betsy peers at the world from her handsome stable. 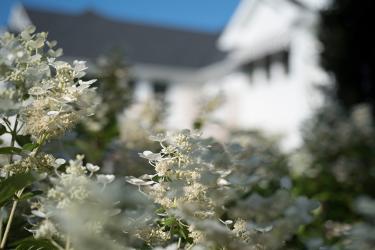 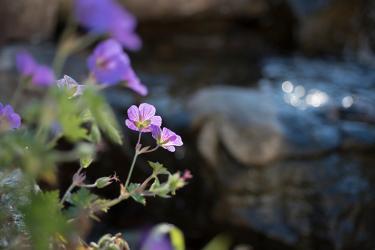 Perennial geraniums (purple) frame the stairway to the pool and outdoor kitchen. 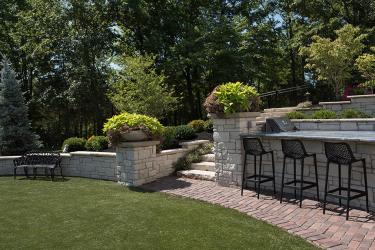 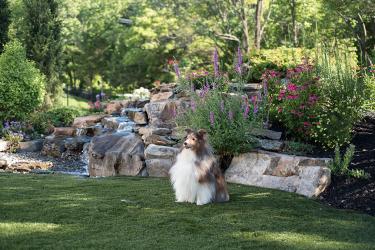 Bandit (dog), backed by a large clump of purple loosetrifle, stands watch on the artificial turf that surrounds the pool. 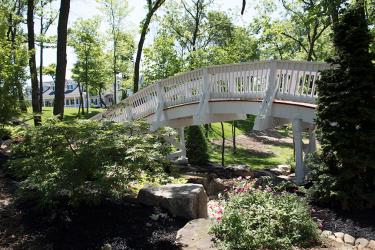 An arched bridge unites the house and the stable. 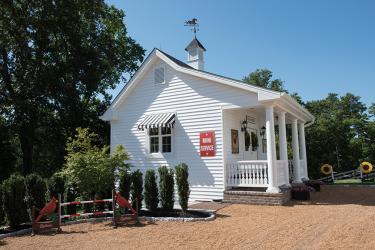 A column of bowood stands guard by the charming building used to store food for the horses. 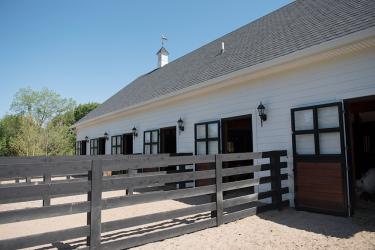 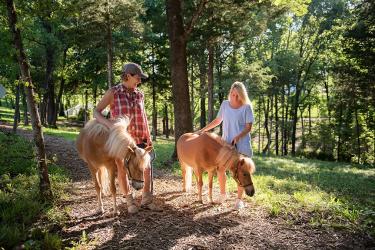 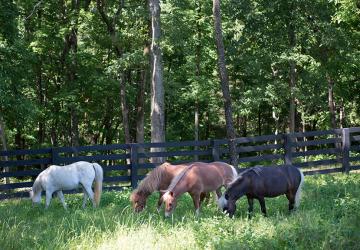 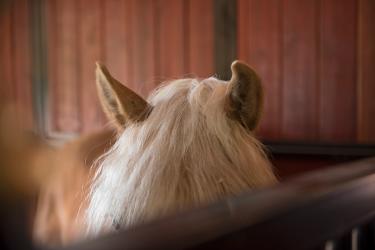 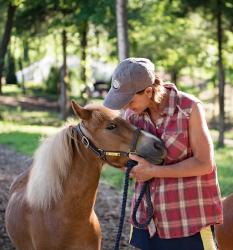 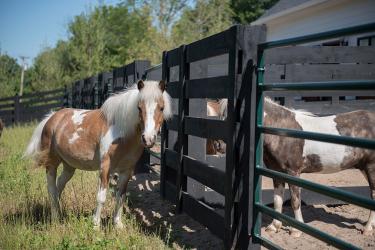 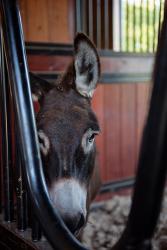 The 23 acres that border Wild Horse Creek Road defy an easy description. There is a massive, white house with wide, welcoming front steps that graces the land with a lovely, hospitable, Southern ambiance. Surrounding the house are lush plantings of flowering shrubs and native plants that soften the hardscape, particularly in back of the home. That’s where an outdoor kitchen, hot tub, fireplace and waterfall surround a shimmering swimming pool. Embracing the pool, a lush green pool “deck,” composed of incredibly lifelike artificial turf, ties the pool into the adjacent rolling, grassy hillside just beyond the wrought-iron fencing surrounding the pool.

But there is much more to the expansive landscape than the house and pool. Veer to the right on the pea-gravel driveway just past the gates to the property and two classic, cupola-topped white buildings come into focus. Both are fronted with balustrade-lined verandas, and they are more important to the story of this special property than the house itself. Bearing a resemblance to buildings at the Kentucky Derby’s Churchill Downs, the larger structure is home to 15 rescue horses, 13 of which are mini horses. All live in gleaming, neat-as-a-pin, luxurious quarters rivaling those in which Anheuser Busch stables its pampered Clydesdales. The charming, smaller structure provides storage for the healthy grains and hay the horses enjoy.

Lovely woodland separates the house from the stable. To provide less arduous walking through a tree-filled ravine, an arched bridge, springing upwards from a landscape of flowering shrubs, spans the gap and ties the human and animal residences together. Walking and riding trails fan out from the stable and the house so that both people and animals can enjoy every corner of the property.

The story of how all this came to be begins with the homeowner, who grew up in Creve Coeur and since childhood has had a love of animals and horses in particular. “I had a horse,” she explains. “My sister had a horse. We had dogs and cats and guinea pigs. If you grow up with all that, you tend to want to keep it up.”

She passed her love of horses along to her now-grown daughter who began riding at the age of seven and now rides competitively. “I still have her first pony,” the homeowner emphasizes. “We are the kind of people who make a lifelong commitment to animals.”

In 2013, rather than board their horses, the homeowner and her husband purchased enough land off Wild Horse Creek Road to accommodate their family of both people (including two sons in addition to their daughter) and animals. Two years ago they moved everyone into their current homes. “We had plenty of room in the barn, and my daughter suggested we get some miniature horses,” the homeowner recalls. (Mini horses by rough definition measure less than 34-38 inches in height as measured at the last hairs of the mane, found at the withers or highest part of the back.) “We got our first two and then things kind of snowballed.”

There are plenty of opportunities to rescue “minis,” the homeowner explains. “They have become my ‘thing.’ People tend to buy them because they are cute but they are every bit as much work as a big horse. They can be more work due to the way their digestive systems work.  You can’t ride them if you weigh more than 51 pounds. The first two we rescued were two years old and had four owners in those two years.”

About six weeks after the homeowner purchased her first minis, “the lady we bought them from called me,” she recalls. “She was at an auction and there was a (mini) mare there with her baby and they were going to separate them. I hated the idea of separating a four-month-old baby from the mom. I told her I would outbid anyone else if she could drive them here. The auction was about five hours away. Shortly after they got here, I realized the mom was losing her eyesight. Since then she has lost her eyesight. Now, she is my girl,” she added brushing away a tear, noting that the mare reacts to the sound of her voice and is extremely affectionate. “I can hardly talk about her without crying.”

Then, there was the mini-sighting on a highway. “My daughter was starting Mizzou and my son was attending a camp at Truman State. I was doing a lot of driving between the two. We kept seeing a mare, always standing by a fence. My daughter did some detective work and found out who owned the mare and we made arrangements to buy her,” the homeowner relates.

There was, however, another (mini) horse in the same pasture standing behind a gate, the homeowner adds. “My husband suggested we buy both horses, who were destined to be pony rides and at an amusement park, and name the first one Sophie. When I asked him why Sophie, he said because I wouldn’t have to make a “Sophie’s Choice,” referencing the novel and later movie where a mother is forced to make an unbearable choice between her two children at a holocaust camp.

After they arrived, the homeowner continued, I noticed that Sophie kept getting bigger. I asked the vet to come out. She did an ultrasound and “we discovered we had a baby coming our way. My daughter was so excited. She said we needed to tell Dad and get a cake. Knowing that both horses had been in the same pasture, I asked the vet to take a look at her sister before she left. She did another ultrasound and said, ‘You better get two cakes.’” The second baby was born one month after the first.

Then, there was the rescue of the mini with a bad foot and the call from the Humane Society involving a horse rescue with minis, bringing the total to 13. “The proverbial inn is now full; we have no more room,” the homeowner says.

The homeowner, a Master Gardener, is hands on with all phases of the care for the horses and green space; “It is just good being outdoors. I don’t know the last time I had a manicure,” she says laughing. However, they do have help with the demands of their property and needs of their four-legged family.  “My husband is a gem,” she says. “He did not grow up with a lot of animals, but he knows this is what I love. Almost every day I say, ‘Do you want to go up to the barn with me?’ and he does. We talk about what is going on and the animals.”

Although the homeowners want to keep their names private, they want to share their love of the horses with the community. “I’m always happy to have kids come over and get close and learn more about the animals. When we did the landscaping, I didn’t want to be hidden from the road. I wanted a place that people loved driving by. We’ve opened the house and stable for the police and firefighters and let them walk the trails. Our temple has a blessing of the animals, and this spring we did it here so the horses could be blessed too. We feel like we have developed a warm relationship with the community; people drive by and leave wonderful messages in our mailbox.”

The homeowners and the horses reciprocate, she notes. “On Valentine’s Day I hung a huge banner on the fence along the road that read: Happy Valentine’s Day. Love, The Minis.”