A Garden in Motion

A nature-friendly garden becomes a living work of art with movement in the grasses and plants. 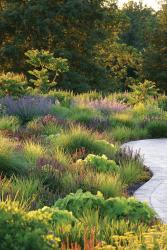 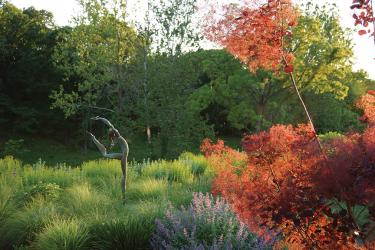 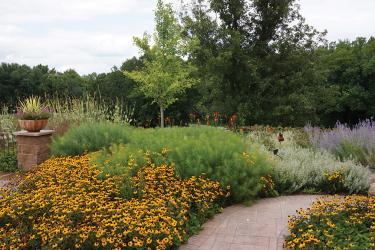 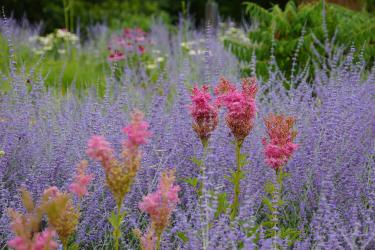 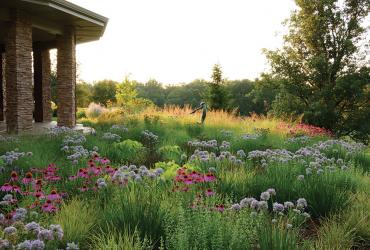 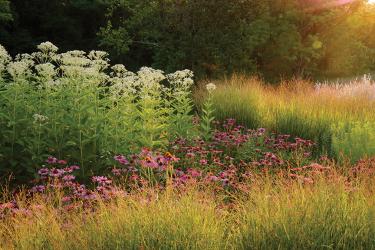 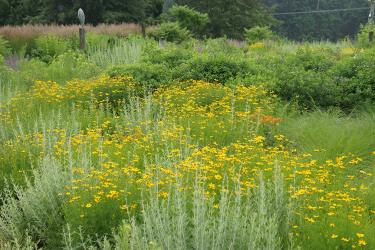 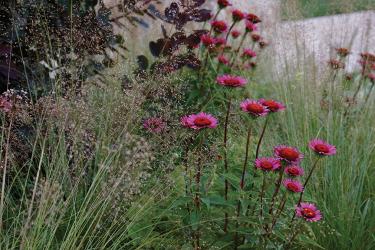 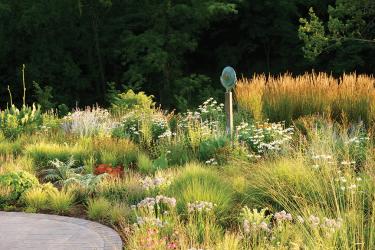 When the Bank of Springfield (IL) doubled the size of its flagship facility 12 years ago, the expansion came with a flowery flourish. Covering a three-acre site, it included 22,000 square feet of gardens meant to boldly accent the streetscape. To design those gardens, the bank selected Adam Woodruff, a young landscape designer with local, central Illinois roots.

Adam, who heads Adam Woodruff + Associates, garden artisans, now calls St. Louis home and has designed such local public plantings as those surrounding the Pierre Laclede Center and The Plaza in Clayton. He was just beginning his career back in 2004. The Illinois bank project allowed him to apply his talents to a landscape that artfully combined native plants with more exotic tropicals in a manner that drew national attention and landed the Bank of Springfield gardens on the pages of Horticulture Magazine, a well-respected national publication.

The project also drew the attention of Lorraine Hart. Lorraine and her husband George, who both worked in Springfield, had just completed a major addition to their home located 35 miles to the south. They were in the process of deciding upon what type of landscaping would fit in with the rural setting that surrounded the residence.

“My idea to begin with was a type of prairie garden,” Lorraine explains. “We are in a rural setting and our home needed something that fit into the land around it. What I particularly loved about the garden at the bank was that there was constant motion in the landscape; the grasses were always moving.”

Through friends at the bank, the Harts made contact with Adam and the partnership began. “He really got our concept having lived in the area and seeing our home with the pasture down below with cattle grazing in it,” adds George. “We certainly did not need a formal garden. We trusted him due to what we had seen in Springfield.”

Adam and the Harts had an additional common bond. All three loved the Lurie Garden in Chicago’s Millennium Park, which opened in 2004 and was designed to create a healthy habitat for plants and wildlife in the midst of a teeming urban environment. The landscaping genius behind the garden, Piet Oudolf of the Netherlands, is probably the world’s leading proponent of naturalistic planting; creating gardens that co-exist with nature rather than trying to pigeonhole plants into a pre-conceived design.

When he came to Chicago to begin selecting the plants that would go into the Lurie Garden, Piet linked up with Roy Diblik, who owned Northwinds Perennial Farm in Lake Geneva, WI, just across the state line from Illinois and Chicago. Also a proponent of naturalistic planting, Roy had made a gardening name for himself by studying how plants grow in communities in the wild and translating that into designs for cityscapes and homeowners. Piet and Roy clicked immediately.

As Adam began his career, Roy was an important influence. Through Roy, Adam met Piet. Both men have happily served as guides and personal friends of the young man from central Illinois who is making his own way down the garden path they have created.

The initial design and planning for the Harts’ garden became an almost two-year process and involved actually moving a hillside to provide appropriate space. “I spent a lot of time on the site on what eventually would be a meadow,” Adam recalls. “We talked a lot about what we wanted to do before we were ready to plant.” He credits the Harts “as being patrons in a way.  They gave me creative license to go out and travel and bring back ideas.”

Once the planting began in earnest, Adam worked with a base layer of grasses and groundcover interspersed with native flowering plants that provide a succession of seasonal bloom. Color combinations that look as though they have been taken from a designer’s color wheel flow through the space. From a strictly graphic point of view, Adam believes in incorporating bold foliage to create structure among the flowers and grasses.

One of his favorite plants is an Illinois native called prairie dock, an aster relative which features a base of spade-shaped leaves that individually can measure 12 inches wide and 18 inches long. When it blooms, usually for a month-long period, it shoots up stalks of yellow, daisy-like flowers from 3 to10 feet high.

He also favors Joe Pye Weed, which grows 4 to 7 feet tall and sports dark green lance-shaped leaves and large clusters of tiny pinkish purple flowers with a vanilla scent that bloom from mid-summer to fall. Not only is the plant attractive to butterflies, the attractive seed heads persist through winter and provide multi-season garden interest, a factor that is important in designing a nature-friendly garden.

A third favorite, baptisia australis or blue false indigo provides 4-by-4-foot clumps of gray-green shrub-like foliage with spikes of indigo-blue flowers in spring. The flowers transform into attractive blackish pods with rattling seeds that once were used as children’s toys and now are more likely added to flower arrangements.

While the three plants work well in an expansive, prairie-like natural garden, both Joe Pye weed and baptisia australis come in dwarf forms that make them suitable for backyard gardeners.

Not everything in the Harts’ garden grew like magic or was well behaved. Moles and voles gobbled up the bulb plants that were part of the initial planting. The structurally beautiful rattle snake master with 4-to-5-foot stalks of gray-green, thistle-like blossoms was so happy it seeded everywhere and eventually had to be removed altogether. As with any garden, the Harts’ landscape continues to be a work in progress. “It’s not as though this is an interior design where you can control everything,” Adam says with a laugh. “Designing gardens you have so many variables that are out of your control.”

Being dynamic also is what makes gardens a living work of art, he believes. “Not only do you have the movement of the wind in the grasses,” he says, “you also have the plants themselves moving slightly from year to year and seeding in unexpected places.”

Adam, the Harts firmly believe, is “like an artist with a palette” and their garden has been the lush canvas. “I have watched him from an upstairs window when he doesn’t know I’m looking,” says Lorraine. “He is holding out his hand and scanning across the landscape and you can just see him thinking ‘we need this color here and that color there.’  We let him go and he has created what we wanted.”

To learn more about naturalistic gardening Adam suggests two books: "The Know Maintenance Perennial Garden" by Roy Diblik and "Planting in a Post-Wild World" by Thomas Rainer and Claudia West.