Dottie Eaton, owner of The Mod Bohemian and designer at Design Style, shares the secret of Bohemian style. 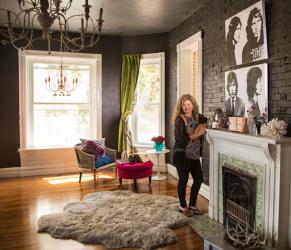 Dottie Eaton, owner of The Mod Bohemian and designer at Design Style, shares the secrets of Bohemian style.

SLHL: What is Bohemian style/design?
Dottie: The Bohemian style is an unconventional, artistic and very individual style. It’s an eclectic mix that can be very “Bohemian Chic.” Bohemian has been embraced by some free-spirited style makers such as Kate Moss, Johnny Depp, Zoey Deschanel and even Tom Ford’s fashions for Gucci were called “hippie chic.”

SLHL: Where did Bohemian design originate?
Dottie: Most people think that it originated in the 1960s and '70s by unconventional individuals who where wanting freedom of expression in their lifestyle, dress and living spaces, but it actually was going on back in the 1800s, most notably the Bloomsbury District in London. The Bohemian style also was a force in Paris, Greenwich Village, Soho and London in the 1960s, and even now.

SLHL: How can I incorporate Bohemian into my existing decor?
Dottie: Add in some color. Incorporate some artistic accent pieces. Make your space more individual and expressive. Try to think creatively.

SLHL: Are there any signature pieces to Bohemian design? If you were just starting out, what would be the first piece you would buy?
Dottie: A lot of people think of a Moroccan or Gypsy look as Bohemian, but, personally, if I had a client wanting the look I would create a beautiful space that was expressive and visually interesting with color, texture and interesting accent pieces. If I were just starting out, I would buy something unconventional… maybe a repurposed light fixture or accent piece. Consider adding in some decorative pillows that are rich in color or texture.

SLHL:  What colors are associated with Bohemian?
Dottie: There are a lot of jewel tone colors that are highly saturated along with some very vivid hues mixed with metallic.