David Moore brings passion and creativity to his inspired furniture. 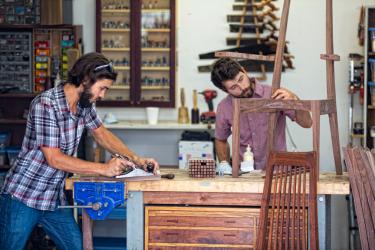 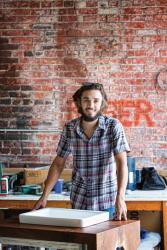 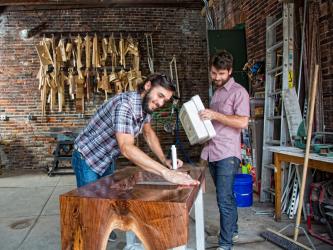 For most young people, their parents’ purchase of a disk sander and scroll saw wouldn’t affect their lives too much, if at all. But for David Moore, David Moore Furniture, that was where his love for hand-crafting beautiful furniture all began.

“It showed me I had a passion for making stuff really early on,” David says. He eventually went to Boston to study traditional furniture-making with an emphasis in classical design. He returned to St. Louis in 2007 and has been practicing his skills and developing his furniture business ever since.

But even after eight years of making furniture, he continues to perfect the skill. David recently recreated 15 “beautiful and curvy” benches for a large institution that put his skills to the test. “I feel like that particular job allowed me to learn so much about furniture-making,” David explains. “It was almost like I was back in school because it was extremely difficult.”

The first step to David’s process is to repeatedly draw the design until his client is happy with the result. Using the final drawing, he creates a pattern and selects the materials. Using joinery with mortise and tenon joints, he puts the parts together. Afterwards, he takes it apart and shapes the piece through carving and smoothing. Once he glues the piece together, he does even more smoothing and joining, and then he completes the finishing process—hand plane, scrape, sand.

The piece is complete once the finishing regimen is perfected. “What really drives me is the finished product,” David says. “The process takes a while so it’s great to finally see it come together.”

David has other motivating factors, as well. He draws inspiration from many sources, including architecture and the time he spent doing rig work for movies. He loves the way the camera moves and works in movies. “That was a time when I really felt like it was shown to me what was possible,” he explains. And David has used that knowledge to create unique and inspired furniture.

“I’ve been practicing skills for a long time, and I’ve always treated skills as something to become an expert at, not realizing that once you work hard enough at those skills you can spend your time focusing on using them to be creative,” he says.