For 22 years Kim Kelce of the garden design team Kelce & Pedley has been creating beautiful landscapes for clients throughout the St. Louis area, but she has the most enthusiasm for her own garden. 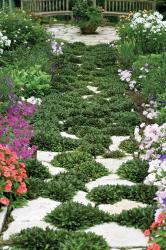 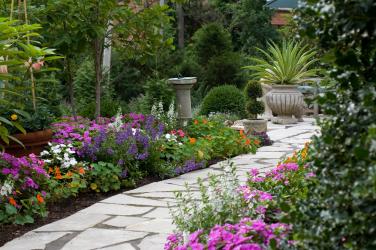 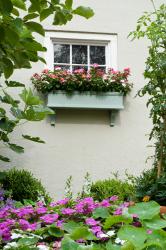 An agave creates a dramatic effect in a large container. 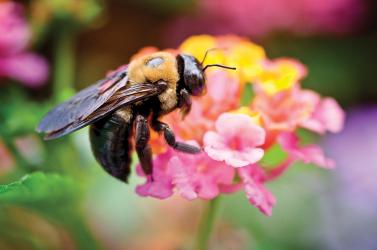 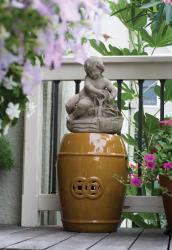 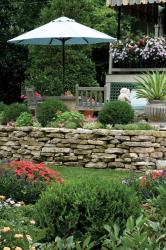 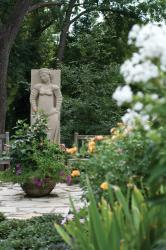 Be it tending to pots overflowing with floral color or supervising projects so major they begin with earth movers and retaining walls, Kim Kelce, along with partner Nancy Pedley of Kelce & Pedley, spends six days a week up to her green thumbs in other people’s gardens. So where does she head when her workday is over?

You’d most likely find her in her own Webster Groves garden nursing a recently planted hyacinth bean vine over a wrought iron arbor or looking for the best place to plant a few orphan yellow marigolds left over from a recent job. “Look at them. You just can’t throw them away,” she says lifting a slightly flopped plant to its proper height.

With all the time and talent she has devoted to clients’ projects “I have the most enthusiasm for my own garden,” she smiles gazing out over the space. “I love being in my garden when I get home. It’s very therapeutic.”

Her current garden has been six years in the making and, at two thirds of an acre, is considerably smaller than the two-acre spread she tended at her former home. Although on a busy street, the property appealed to her because the deep lot offered privacy in back and she easily envisioned ways to screen the historic, European-influence residence from traffic.

Kim began by framing the front of the property with a tall line of evergreen Foster hollies. Working toward the house, a second line of Winter Gem boxwoods scales down the height of the hollies and ties the screening to the earth. Azaleas, scattered through the landscaping, provide beautiful spring color. The back of the property presented a second challenge. While once the site of a lovely garden, weedy honeysuckle had taken over. “It took me two years to get rid of it,” Kim recalls. She also needed to re-grade and build up parts of the space.

A plus was Kim’s good relationship with the previous, long-time owners of the property Rich and Alex Usher, who took a great interest in her restoration of both the house and grounds. In addition, they provided background on the home, which was built in 1887. The most striking feature of the historic landscape was a flagstone walkway, still lined with the original iris and peonies, that went straight down the center of the yard. It was a feature, that though unusual, Kim quickly decided to retain. “It’s not something I would envision doing for someone else,” she suggests. “But when you see it in this yard, it makes perfect sense.”

To the existing plants Kim has added amber Drift roses, tall, white David phlox, purple bell flowers, mounds of scarlet Divine New Guinea impatiens and evergreen boxwood shrubs for winter interest. Most striking is the tiny, purple-leaved Chocolate Chip ajuga that creeps between the flagstones in the walkway, outlining each stone as if it were a piece of the three-dimensional quilt. At the end of the path, a stone relief of a medieval lady watches over all. “She’s a piece by (sculptor) Bob Cassilly that I had at my other house,” Kim explains. “I just couldn’t leave her behind.”

Kim also managed to reclaim flagstone steps leading to a shady, lower, grotto-like enclosure at the very back of the yard. “Alex told me they were there,” she recalls. “I just had to keep working until I uncovered them.” Now lined with hosta, azaleas and hydrangeas, the space projects a cool, serene, refreshing ambience in even the hottest weather. “My kids tease me and say, ‘Mom, why do you want to have a garden back there. No one sees it,’” she says. “I tell them, ‘I’m the one who sees it.’”

Kim is delighted to credit Alex Usher for a number of plants in the garden, such as the magic/surprise lilies grouped as floral bouquets along the steps and has tried to retain as many plants from previous owners as possible. “Alex planted things, and I’ve rearranged them to work in this landscape,” she says.

The most recent addition to Kim’s landscape is a deck off the back of the main floor of the house and a stone retaining wall and patio off the lower level. Both break up what otherwise would appear to be a four-story structure from the rear. They also provide additional garden space. Lush flower boxes overflow deck railings and containers of herbs and vegetables, such as tomatoes and peppers, add utility to the lovely patio.

Her garden succeeds, Kim says with a laugh, because there are few, if any, rules.  Terra cotta pots mix with limestone. “I like to try things. If it doesn’t work, it doesn’t work. You can always change things.”

The most successful gardens, she feels, mix annuals, perennials and tropicals. “They all have their value,” she notes. Kim also has success mixing shrubs and annuals such as boxwood and New Guinea impatiens, normally thought of as shade loving, into sunny spaces. The secret, she says, is making sure the shade lovers get plenty of moisture.

Her tips for creating a beautiful garden include regular pruning to maintain size and keep plants looking tidy and regular feeding, particularly of annuals. “Just because you have an irrigation system,” she notes, “doesn’t mean that you don’t have to add additional water to trees and shrubs, particularly in hot summer weather.

“People need to understand,” she emphasizes, “that gardens are always changing. You can’t plant something in a space and have a look that always stays the same. Gardens are made up of living things than grow and change. You have to care for them.”