A Radical Culinary Match Made in the Alsace 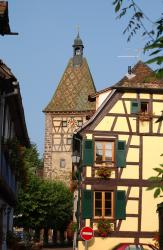 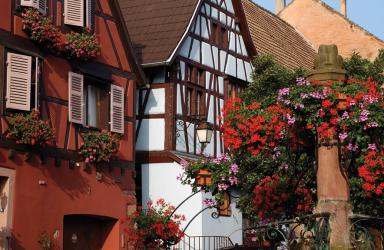 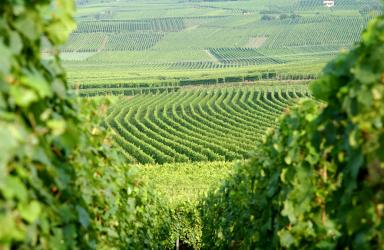 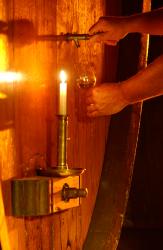 In the ancient caves where Gustave Lorentz fine wines are aged, the winemaker tests the 2010 vintage's clarity for purity in the traditional way - by candlelight. 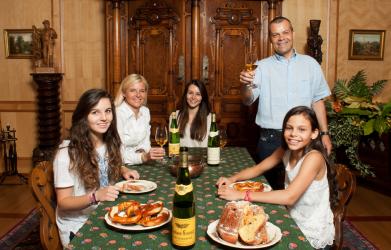 Georges Lorentz, the sixth generation owner of this venerable Alsace winery, toasts his beautiful wife Ingrid and three daughters in their antique-filled dining room at the family's chateau in the French town of Bergheim. 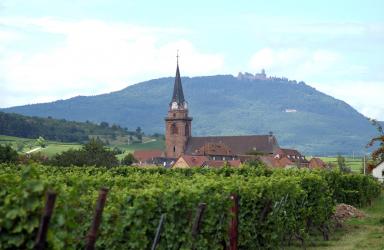 The grapes for the Gran Cru white wines of Gustave Lorentz come from this vineyard in the Altenburg de Bergheim, in the foothills of the Vosages Mountains of France.

The region of France that turns on its head the tried and true axioms about the proper wines to serve with meats and fish or chicken is in the northeastern part of the country, bordering both Germany and Switzerland. The Alsace lies in the picturesque Rhine River Valley, just east of the Vosges Mountains. Its geography has informed its history as this picturesque land has changed hands between France and Germany several times. From the names of its towns and cities to its cuisine and wine production, one can easily identify both French and German influences.

Like Germany, the wines are largely white, including dry and off-dry Rieslings and Gewurztraminers. But Cremants, that show Champagne-like characteristics bubbles and all, have a definite French flair. There are also dry Pinot Gris and Pinot Blancs that are neither French nor German – much more particularly Alsace.

Yet, despite the popularity of white wine, this region is not known for seafood, aside from fresh-water trout found in the Rhine and lakes in the area. Pork and pork-based sausages, frankfurters and bacon typically are served here. They can be found either roasted or braised in stews or hearty dishes such as the world-famous, traditional Choucroute (“sauerkraut” in the old Alsace dialect). It is a stew of smoked pork shoulder, bacon, pig knuckles, sausages and Strasbourg frankfurters, cooked with the sauerkraut, onions, garlic and potato.

The potatoes, dumplings, noodles and spatzle in many Alsace dishes lean heavily towards the German side of the region’s personality, while other dishes are “tres” French. These French-influenced foods would include: Tarte Flambe (with onions, bacon, butter, heavy cream and Fromage Blanc), pates, foie gras, onion tarts and cheese pies. Also influenced by the French is Coq au Riesling, a chicken-based stew with cognac, carrots, garlic, mushrooms, a host of herbs and a cup or two of chicken stock and Riesling in which to simmer the rest of the ingredients. Additionally, the region’s white wines, with their acidity and richness, are excellent libations for these hearty, meat-based dishes.

These are the foods on which all the wine families of the Alsace have been raised. Take for example Georges Lorentz, whose family has been growing grapes and making some of the finest Alsace wines since 1836. Georges is the sixth generation of the family to proudly produce Gustave Lorentz wines, so named after the founder.

Along with his wife Ingrid and three beautiful daughters, Georges still enjoys these dishes in their historic chateau in the town of Bergheim, right in the heart of the Alsace. Bergheim is one of the few cities to have retained its medieval walls, which date back to the 1400s. The centuries-old masonry and timber-lined homes within these walls are surrounded by some of the most beautiful floral landscaping in all of Europe.

Among the family’s favorite treats are the Alsace specialties Bretzels, a large pretzel with a bread-like” consistency, and a brioche-shaped bread called Kougelhopf, which is studded with smoked bacon bits and walnuts. Sparkling Cremant d’Alsace is a great wine for the adults to enjoy with these savories.

With October’s cooler weather pointing us in the direction of soups, stews and heartier fare like Choucroute, Coq au Riesling and the rest, it’s a comfort to know that we don’t have to give up our white wines – we just have to follow the Alsace’s lead and defy conventional food-wine pairing wisdom.

Preheat the oven to 350°F. Roll out the dough and place in a buttered, floured tart mold. Peel and core the apples, and cut them in quarters. Place them in circles on the pastry. Beat the eggs with the two types of sugar and the cream and pour the mixture over the apples. Place in the oven for 30 to 40 min at 350° This tart is delicious served hot, with a sprinkling of cinnamon, but can equally well be eaten cold.