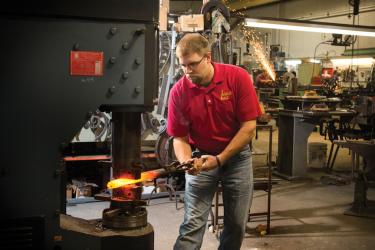 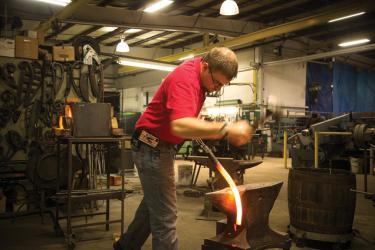 “Everything here is either hot, sharp or dirty,” jokes Mike Kinnikin, describing his 12,000-square-foot metalwork shop, Eureka Forge. Mike, along with 11 other guys, spend their days at the shop creating one-of-a-kind artworks out of steel, bronze, copper, brass, aluminum and other metals. “My dad started this business, and I learned from him. I grew up with it,” Mike says.

Eureka Forge has built an international reputation for their design and quality in producing custom architectural metalwork, winning top awards from both the American Institute of Architects and the National Ornamental and Miscellaneous Metals Association. They've become well known for their elegant, tight-curved, sweeping staircase railings. “They're difficult, but we've made so many, we've gotten quite good at them,” says Mike. “We like the challenge.”

They tackle both indoor and outdoor metalwork projects of all kinds, making gates, fences, furniture and even sculpture. Much of their work blends decorative elements such as vines, scrolls, flowers and birds with the functional aspects, resulting in spectacular finished pieces.

“Artistic design, architectural design and engineering design all go into each piece,” Mike says. “In designing a piece, we listen to what the customer wants, but we also look at the space where it will be installed and try to create something that fits in with the surroundings.”

Fabricating the pieces is a collaboration among everyone at the shop. Each person specializes in one or more areas of the process. The shop is arranged in a rotation, starting with a raw materials area, then moving to a cutting area, forging, assembly and finishing areas. “We try to fuse old world techniques with modern technology to be more affordable,” says Mike.  “Today, we use computer-aided drafting software to design a piece. We have a programmable cutting machine that can take the raw materials and cut all the pieces to the right size. We utilize power hammers to expedite the forging process,” he explains. They also use modern welding technology, in addition to the old “heat and hammer” method blacksmiths used in the 19th century and before.

While the majority of their work is installed in private homes, Eureka Forge also does commercial work. At the Missouri Botanical Garden, their work is spread out all over the garden, from the entrance gates to the guardrails by the koi pond in the Japanese garden, to the gazebo.  They redesigned an entry gate at the Frank Lloyd Wright home in Kirkwood because the gate had to be updated to modern code requirements and made bigger to accommodate fire trucks.

Mike enjoys his work at Eureka Forge. “I like to work with metals. I like the feel of it, the strength of it, and the ability to heat it up and shape it relatively easily,” he says. “I like to blend the mechanical with the ornamental, such as a gate that works, but is covered with ivy.” He enjoys taking a customer's idea, and with the help of everyone at Eureka Forge, bringing it to life. Perhaps that's why their tag line is “From your imagination, we forge reality.”