A busy executive finds his "castle in the sky" in the private residences at The Chase. 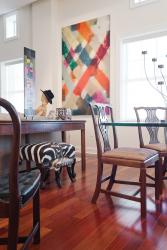 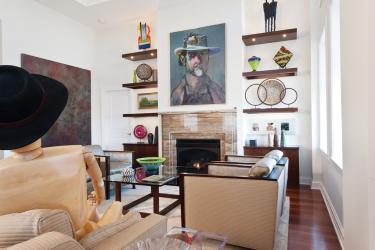 The homeowner frequently rotates the art pieces displayed on the custom shelving that brackets the living room's exquisite granite fireplace. 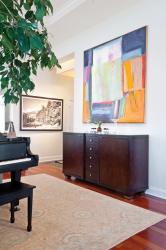 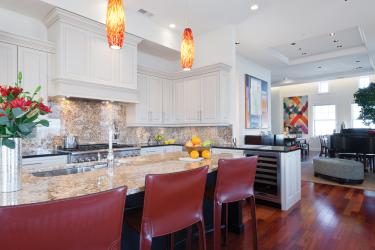 The bold geometric abstract ont he far wall is painted on the back of an acrylic panel. 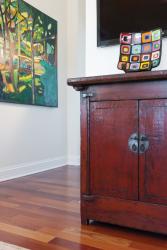 An expressionistic oil rendering of Forest Park is displayed in the hall to the master suite. 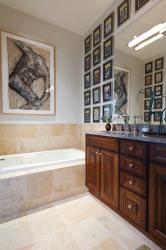 Broadway playbills line the walls of the master bath. 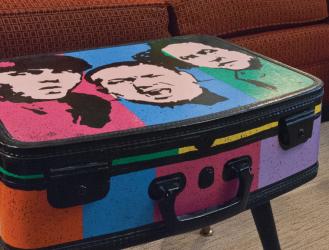 An amusing "suitcase" table dipicting the Three Stooges is an irresistible conversation piece in teh office/AV room. 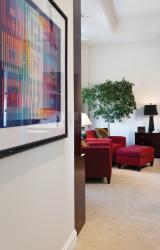 Deco styling creates a rich ambience in the coffered bedroom.

When maintaining his large contemporary home in Kirkwood took more time and effort than he was willing to spend any longer, the owner began looking for an alternative.

As senior vice president and branch manager for a major St. Louis-based brokerage and banking investment firm, he spends one week each month in his secondary residence, a high-rise in New York’s prestigious Lincoln Center.  In his “spare” time, he’s a patron of the arts, serving on the St. Louis Regional Arts Commission and Shakespeare Festival board; is an investor in on- and off-Broadway productions; and has been involved with organizations providing support services to AIDS patients in both cities for more than two decades.

His appreciation for the vibrant urban lifestyle ultimately drew him to the newly renovated Private Residences at the Chase Park Plaza.  “I wanted convenience and service,” he remembers.  “Here, I’m just 10 minutes from my office in Clayton.  I don’t have to leave the building to go to the gym, the theater, or a restaurant; Forest Park is just across the street; and for concierge services, I simply pick up the phone.”

The clincher, however, was the towering views, which are truly spectacular day and night! – extending westward to the Missouri River bluffs, east to Busch Stadium and the Arch, and on a clear day, all the way north to Alton.

Although nearly completed at the time, the 2,320-square-foot luxury condominium the owner chose still allowed him to make a few design changes.  The challenge was to integrate his preference for the “simplicity and functionality” of contemporary design with his genuine respect for the Chase’s historic Deco styling.  The result is a visually satisfying blend of modern and traditional furnishings that might best be described as transitional.

Cue the Lights.   A devotee of top-notch stage productions, the owner first focused on the interior lighting system.  The condominium’s 14-foot ceilings could easily accommodate elaborate chandeliers, but that wasn’t the open, uncluttered look he was trying to achieve.  His solution was a sophisticated system of controlled overhead LED lights that provides adjustable, unobtrusive illumination throughout the home.

With windows on three sides, natural daylight is abundant, and removal of the dropped ceilings on this particular floor during renovation had revealed an extra row of architectural windows, long hidden and unique to this level of the Chase Park Tower.  Since privacy wasn’t an issue at this height, the owner chose see-through mesh shades and solar window film to reduce glare without obstructing the views.

A Backstage Tour.   It might seem unusual to begin a tour of this elegant home in the master suite, but the privacy area offers considerable insight into the owner’s multifaceted personality.  In the access hallway is a clever three-dimensional street scene, entitled “The Neon Lights Shine Bright on Broadway,” by Charles Fazzino, a highly collected pop artist.   On the opposing wall hangs an expressionist oil painting of Forest Park.

The juxtaposition of seemingly disparate pieces like these occurs throughout the home, illustrating the owner’s appreciation for all types of artwork.  “When I see something I like, I buy it,” he explains simply.

In the master bedroom, an abstract by local artist Jim Pegg tops the mahogany sleigh bed.  Clean-lined marble lamps on the mahogany side chests add a Deco touch; a built-in mahogany desk unit fills one corner; and wine-hued upholstery and bedding lend rich color to the space.

Dozens of framed Broadway playbills – only a small portion of the owner’s collection – blanket the walls of the sumptuous master bath, and a large charcoal, by Joe Federer and purchased from Drew Wojcik Gallery in downtown St. Louis, enhances the tub alcove.

The Performance Area.   Deftly fielding interview questions while simultaneously accepting catering deliveries, the owner explained that he’d be hosting a party for 40 guests the following evening.  Completely open from the foyer to the island kitchen, living room, dining and casual seating areas, this view-packed, art-filled home is well suited to entertaining.

The living room’s focal point is a gleaming custom-designed granite fireplace, flanked by display-lit custom shelving and surmounted by a self-portrait of Edward Boccia, the late modernist painter, poet and Washington University professor.

Upholstered in a combination of soft teal-and-beige damask and ribbed silk, the sofas are grouped around a streamlined glass coffee table that rests on one of two muted wool rugs from Pakistan with a worn, beaten look.  The entertainment space also showcases an American antique secretary in crotch mahogany that the owner has cherished for more than 30 years.  Atop the secretary are several antique santos figures, which he collects.

The pièce de résistance, however, may be the K. Kawai baby grand player piano, which operates from an iPod and has been equipped with internal stereo speakers that can provide orchestral accompaniment.

A 60-inch glass top was fabricated for the nickel dining table base, purchased by the owner in New York, and a set of walnut Chippendale chairs that formerly belonged to his mother completes the dining ensemble.  When needed, the sofa table has a flip-top that provides additional seating for larger dinner parties.

In the Wings.   With no need for a guest suite, (“I have 435 guest bedrooms right next door!” he quips), the owner converted the second bedroom to an office/AV room.  His custom desk unit and flat-screen TV occupy one wall, and the remaining walls display an eclectic collection of outdoor scenes, including watercolors by James Godwin Scott, a vintage park tableau, and a large painting of hunting dogs.

Curtain Call.   For this engaging, well-traveled professional, his Private Residence at the Chase has proven the ideal urban lifestyle – convenient, dynamic, maintenance-free, and a luxurious setting for his many treasured acquisitions.

Better yet, his creative approach to interior design reflects his personal taste, cosmopolitan interests, passion for the arts – and even his whimsical sense of humor, while still paying homage to the Chase’s dignified styling.  To which we can only respond with an emphatic, “Bravo!”