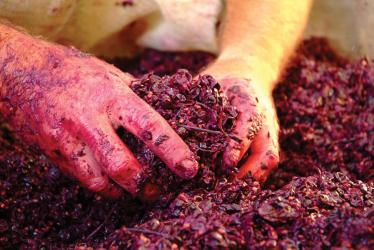 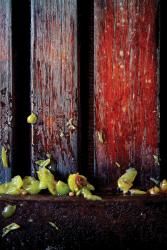 Kay Brothers use the traditional Australian "basket press" method to extract the juice from their Chardonnay grapes.

Herbert and Fredrick Kay, grandfather and grand-uncle of the current owners of Kay Brothers, started the winery in 1891. 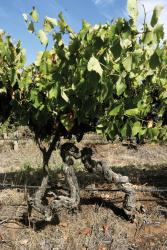 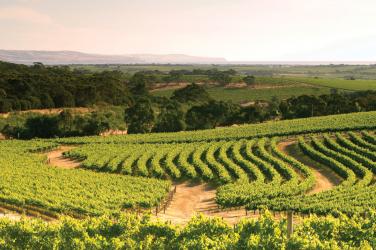 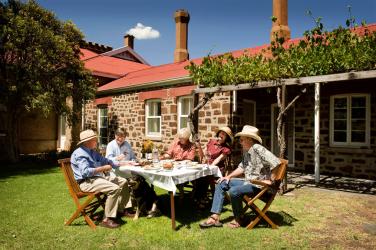 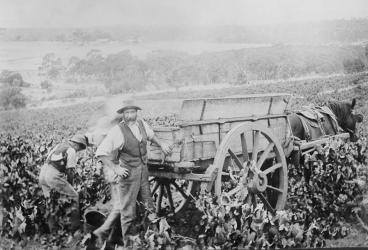 Is there any other time of year that you hear the word lamb as much as around Easter, when it is probably enjoyed at more American dinner tables than any other meat?

In the U.S., oven-roasted leg of lamb, traditionally accompanied by mint jelly, or broiled lamb chops au jus are the usual preparations.  But, in South Australia at Easter the lamb, which is ubiquitous in both Australia and New Zealand, is usually barbecued with the family gathered outside for the Easter meal.  Most often it’s Saltbush Lamb. Saltbush is a native plant rich in minerals and nutrients that give Australian lambs an especially flavorful taste and tenderness.

At Kay Brothers, the oldest family-owned winery in the McLaren Vale appellation of South Australia, the Easter repast of Saltbush Lamb, with a fresh garden salad and freshly harvested corn, is a tradition that happily pairs extremely well with their award-winning Shirazes, especially the highly rated Block 6, Hillside and Basket-Pressed labels.

The feast is usually enjoyed on an old wooden table outside their family’s traditional fieldstone and wood homestead, which dates back to the late 1890s when the winery was founded by the grandfather and grand-uncle of the present owners. Today, brothers Colin and Bill Kay, along with sister Alice and all of their spouses, children and grandchildren, enjoy the picturesque surroundings, not only during holidays like Easter but also for picnics and weekend gatherings that brings all the generations together exactly where their ancestors celebrated Easter and the harvest.

Strange though it may seem to us as we’re looking towards the end of winter, early April is actually the start of fall in the southern hemisphere – and also harvest time. Harvest not only for grapes, but also fruits like fresh figs. Kay Brothers have many fig trees. They favor the White Adriatic fig, which has a light greenish-yellow skin and a very attractive deep pink flesh. The flavor leans towards strawberries and makes a terrific accompaniment for the local cheese board, usually featuring a brie from the Adelaide Hills, due northwest, and a ricotta from Kangaroo Island, which is about 60 miles south of McLaren Vale. Along with locally-grown fruits like apples and pears, the cheeses (and some tasty Aussie port) are the perfect end to the “al fresco” Easter feast.