Alison Bozarth has a lot to say about the world, and she expresses herself with color and canvas, pigment and paper. 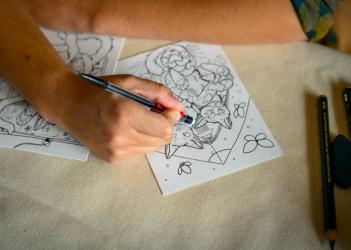 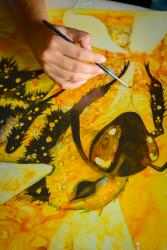 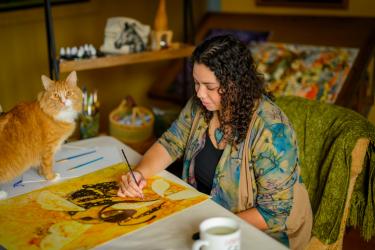 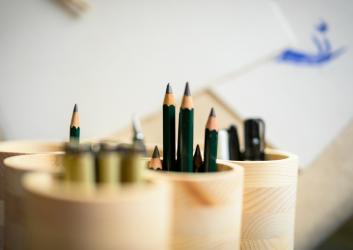 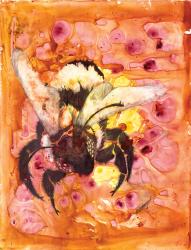 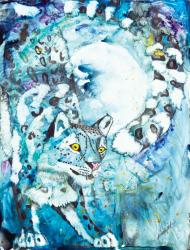 The creative mind behind Freckled Illustrations uses her vibrant and often whimsical artwork to raise awareness about the plight of animals, the planet, mental health and more. The layers of pigment and media included in her illustrations mimic the layers of meaning she builds into each artwork. “My hope is that people can stare at my pieces and discover something they missed time and time again,” Alison says. The black and white mental health images in her "Time to Talk" series (which she sketched after reading the symptoms of various conditions) are a means of starting a conversation, developing an understanding and ending the stigma.

Alison works in a variety of mediums, mainly highly pigmented watercolors, alcohol ink, and graphite. “I typically start outlining, then ink the image," she says. “For my ‘Giant Series,’ I start with a base level of color and build up layers for the background. I then go back in and add more detail, enriching the habitat. Once dry, I use graphite to illustrate the animal, adding as much shading, detail and perspective as possible. I continue to add depth to the piece with copic markers and alcohol ink. I’ll even ‘pick up’ pigment off of the image to get back to white, with continued detailing until I am happy with it. My final touch is to add tiny people hanging on trying to keep the animal on the planet.”

Drawing has been Alison’s passion since she was young, her talent evident from grade school where she won the Maestro Award for "Picture the Music" organized by the St. Louis Symphony. At Webster University, she helped create the BFA specific to illustration program and was the first student to earn the degree in 2017.

As an artist, she finds inspiration everywhere, but mostly in animals and nature. “I’m an illustrator at heart, so I love making concepts come to life,” Alison says. She doesn’t like to plan, but rather goes with “what feels right in the moment.” For one piece, she invited ants to walk across the pigment, putting honey in the middle of the painting to entice them. “They left these tiny trail marks all the way through . . . it turned out to be a beautiful piece, so I drew a huge ant with smaller ants being ridden by tiny people.”

She mainly works at her home in Rock Hill, but all she needs is a flat surface. “I sketch where I can. If there is a flat surface, I will be working on it. I love having music on and talking to people as I’m creating. It really adds to the work.”

Alison has work at Angad Arts Hotel and Soulard Art Gallery. View her art shows and online at alisonbozarthart.com.