A Garden of Riches 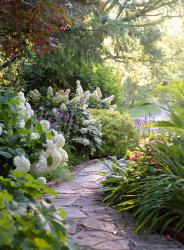 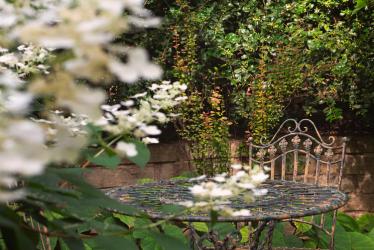 The first time they walked through the front door of the Webster Groves home they have now lived in for 14 years, Linda and Allen knew it was the right house. They looked to their left and immediately saw a sitting room with French doors to a patio. Directly ahead, looking through the house, a wall of windows provided a more expansive view of the extensive patio and framed the mature garden beyond.

As she took in the one-acre, terraced landscape surrounding the charming, brick and frame, story-and-a-half home, Linda’s latent gardening genes came alive. “I’ve always loved gardening, since the time I was a child,” she says. However, a career as a busy attorney and raising two daughters left little time for her to plant, prune and weed.

Now, she was embarking on a different time in her life. Her girls were college age. She had recently become engaged to Allen Springer, who had just retired from his own successful career as an engineer. Each had sold their respective homes and were looking for a new home together. Both believed the house had good bones inside and out.

With Allen’s background in engineering and a knowledge of construction, he was ready to tackle interior home renovation projects. Linda claimed the yard. “I am a gardener at heart. The size of the yard was overwhelming, but I thought, ‘I can do this.’”

What Linda did not realize as she gazed at the well-established landscape, was that she was about to discover buried treasurer. Uncovering the riches was a gradual process. For the first few years they owned the house, Linda continued to work full time. Ivy and euonymus covered vast stretches of the landscape and flowed over onto the patio. “I didn’t know what I was going to do with the garden, but I knew the ground cover had to go,” she recalls. “I worked on it on the weekends in the spring and fall when the ground was damp and it came up pretty easily.”

After moving in, Linda and Allen discovered traces of a 4-foot-tall brick wall under ivy and euonymus. The more she clipped, the more wall she found until it stretched to 50 feet. “When we took possession, we had no idea that the wall existed,” Linda says. Nearby, ornamental grasses blowing in the wind revealed something that appeared to be concrete. Closer investigation revealed a cherubic statue and tiny water feature, which Allen refurbished. As the ground cover gave way, they also uncovered a network of what once had been cobblestone-and brick-lined pathways that stretched throughout the upper terrace. Allen took the time from working on interior home projects to dig out the old stones and help Linda redefine the paths. “About 85 percent of the stones were there. We just had to dig them out,” Linda recalls.

The first attempt to fill in the paths with wood chip mulch forced a re-do when the lightweight material washed away in heavy rains. Now, 15 tons of Meramec grade C gravel top paths that were first lined with ground cloth. “We had it delivered, and Allen wheelbarrowed it down. It took him about a year to do it all.”

Throughout the process, the couple took time to identify the healthy existing trees and shrubs in their landscape including beautiful hydrangeas, river birch, fringe trees, red buds and Japanese maples. Nature also had a hand in the process in 2009 when they lost a huge white oak that shaded a major part of the garden. When it went down, it crushed numerous azaleas and other shade plants as it fell.

“I mourned the loss of the shade for a while, and then I thought, ‘sun,’” Linda recalls, realizing that she now had a chance to grow vegetables for their kitchen and sun-loving flowers to cut and bring into the house. Slowly, that part of the garden took shape. It is now surrounded with a boxwood hedge that conceals chicken wire fencing designed to keep rabbits from eating the vegetables before they can make it into the kitchen. To guard the tomatoes from hungry squirrels, Allen constructed a mammoth, pagoda-like “tomato cage” that acts as an architectural center of a garden filled with ripening eggplant, cucumbers, kale, beans and numerous herbs. A wooden bench in the garden was a Mother’s Day gift from her daughters.  “It makes me so happy to go out in the morning and pick some berries and vegetables for our dinner,” Linda says.

Linda retired in 2015 and turned full-time attention to her garden. She added a shed at the top of the garden hillside, so she was not continually pushing all her equipment uphill. She took classes and became a Master Gardener. To put in her required Master Gardener volunteer hours, she began working at the Missouri Botanical Garden in the area surrounding the President’s House to get a better feeling for things she could translate into her own large, established landscape. Even more important was her friendship with Nathan Urben, the horticulturist who oversaw that part of the Botanical Garden. “He has a side business called Urben Designs. He began helping me when I developed tendonitis and has gone on to help me with plant selection, installation, maintenance and design in different parts of my garden,” she reports.

Her travels with Allen provide continual inspiration. “We were in the Piedmont area of Italy, and I saw a statue of a woman holding a bowl with a beautiful landscape behind it. I took a picture of that statue, and when I came home, I began looking for something similar. I found an angel holding a bowl at Sandstone Gardens in Joplin.” It now graces the garden at a junction of two pathways surrounded by hydrangeas, hostas, sweetspire, ferns and begonias.

An antique bistro table and two chairs she fell in love with while in France turned out to be easy to ship and now occupy a quiet spot to sit alongside a stone wall. They are nestled among brilliant white oak leaf hydrangeas, begonias and ferns.

To manage the large area, Linda divides it up in her mind and in her planning. For instance, there is the angel garden, the bistro garden, the lamppost garden and the stairway garden.

“I spend a lot of time just looking,” she says. “I am thinking, ‘What do I want to see? What does the land tell me about what I want to see?’ I want each view to reveal as much of the garden as possible.” She also considers the vistas of the garden from the house, particularly in the rooms where she and Allen spend a great deal of time. She continually moves plants from one area of the garden to another to get her desired look.

This summer, because the garden was selected as one of the stops on the Missouri Botanical Garden Garden Tour, she added a number of annuals to her landscape for bright pops of color in areas where perennials and shrubs eventually will fill in.

Because her garden is so large, Linda is continually looking for ways to decrease maintenance. “There are days when I strap on my tool belt and go out and work for 10 hours in the garden,” she says. “But I realize I can’t do that forever.” She recently began adding areas of spreading, low-growing, swirling oak sedge to her landscape to replace mulch and keep down weeds.

For the hundreds of hours she has put in removing ground cover and the labor involved in creating the now wonderous new spaces, the garden has paid her back in the joy she feels as she watches each area flourish, Linda affirms. “It is therapy. While I am working, I see the wonder of God in the way the plants thrive and how they work together. I feel so blessed that we live in this beautiful area.”

“This property both inside and out has provided us an outlet for our creativity and our desire to stay active in our retirement. There is always something to do; something to improve. It is good for us.”