Fifteen years after moving into their dream home, a Creve Coeur couple embarks on an extensive renovation inside and out to make the house their own. 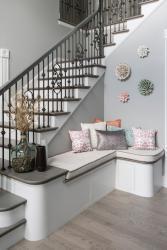 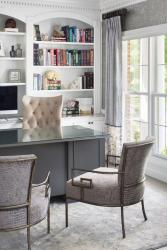 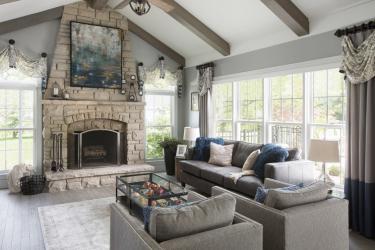 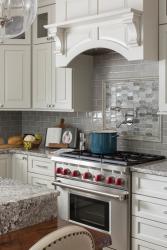 A new Wolf range was one of the “new, better appliances” on Mary Faller’s wish list. One of the couple’s pet peeves in the kitchen’s old design was the lack of a backsplash. Designer Candice Wideman selected a gray subway tile and extended it to the ceiling. 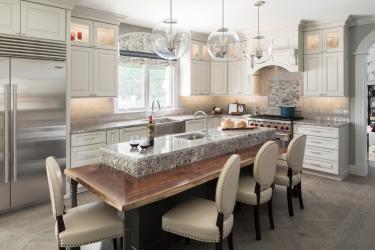 A new, two-tiered island takes the same footprint as the old island but is more functional for the family of five. The counter-height section is topped with granite and features a prep sink, one of Mary Faller’s must-haves. Live edge wood brings a natural element to the bright space. The farmhouse hammered Linkasink features a decorative, stainless steel front inset which can be changed for a new look. Seeking to bring an element of the outdoors to the interior spaces, designer Candice Wideman selected the ceiling fan reminiscent of a windmill. “It’s something intriguing to look at,” says Wideman. Live plants, a favorite of Mary Faller, also add a natural element. Cooper, the family’s Jack Russell mix, approves. 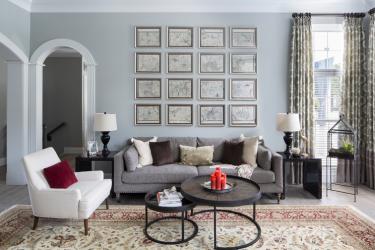 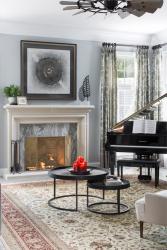 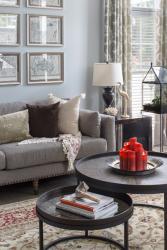 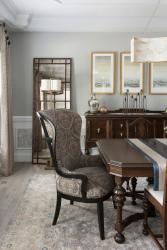 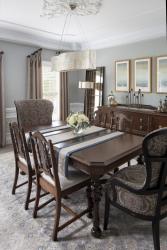 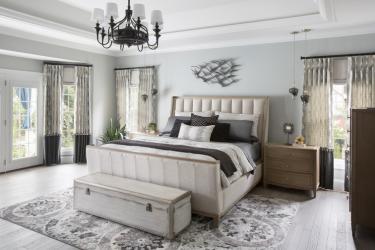 High on the owners’ wish list for the renovation was a thoughtful design for their bedroom. Wideman found furnishings at A.R.T. Furniture and added a trunk by Hooker. A rug in shades of taupe, black, gray and cream adds texture and softness. A column in the bathroom’s original design rested on the edge of a tiled, jetted tub; the wall between the tub and the original shower was half glass/half drywall. In the remodel, designer Candice Wideman widened the column’s base and extended it to the floor. The column’s ledge provides space for candles, soaps and other goodies for a luxurious soak in the new freestanding tub. Designer Candice Wideman extended a redesigned column into the shower, creating a bench for seating. She clad the column in 3/8” by 3/8” inch glass tiles; the shower bench is topped with quartz. New patio areas serve as extensions of living space. A sturdy aluminum table and chairs accommodates a busy family of five and their friends for outdoor gatherings. Part of the new pool’s design featured a waterfall and tanning ledge. Designer Candice Wideman suggested the resin chaise loungers in this area. “The two chairs and little table just make it more

In 2005, Paul Mills and Mary Faller purchased their dream home, a two-story spec in Creve Coeur built by Berkley Construction. “I couldn’t believe at such a young age we had this beautiful, big home where our children would grow up,” recalls Faller, a physician who had graduated from medical school just a few years earlier. “It had everything we wanted so there would be no need to move.”

Fifteen years, three children, two cats and one dog later, the home was still solidly well-built, but the appliances and furnishings were getting tired. And if they’re being honest, Mills and Faller say the home never felt like it was theirs. Its formality wasn’t really their style, says Mills, who is also a physician. They’d focused on their children’s bedrooms with décor reflecting the kids’ interests, but they’d never done much for themselves, particularly in the owners’ suite, which retained the same “builder’s beige” walls from the mid-2000s. It was time, Mills and Faller decided, to update the home that had begun to feel heavy, with thick cherry cabinetry and trim, dark floors and a sense of weariness.

The notion of making the home their own extended to the outdoors as well. Three years ago, Mills and Faller embarked on a significant project with plans for a new pool, hot tub and expanded entertaining space. Realizing they could use professional help to integrate the new outdoor spaces with the forthcoming interior remodel, Faller connected with Candice Wideman, owner of Youtopia Designs. Mills says the couple had worked with a few designers on small projects over the years, but the results were less than satisfactory. “We were too young and naïve to say to a professional, ‘no, this doesn’t really work for us.’ We had to grow up a little and get more experience in finding someone we felt comfortable with,” says Faller. That “someone” turned out to be Wideman.

For the outdoor entertaining spaces, “I wanted to do something different and unique,” says Wideman, who designed a two-tiered combination bar and fire feature. “We’d already selected the curved sofa, so I thought if we also had seating at the upper level of the bar, people still feel the warmth of the fire,” she says. To ensure drinks are accessible, Wideman designed clever, built-in troughs with custom drainage. “You fill these with ice and drinks, and when you’re done, the water drains out,” says Wideman.

Mills says one of their goals for the outdoor renovation was to create a space where their children could have their friends over. The outdoor space makes for relatively fuss-free hosting, says Faller, who notes it is critically important to her for kids to feel included, not just her own, but all the kids in the family’s circle. “Whether it’s with school, sports, friend groups, we have this very nice space to just bring people together, so that kids feel like they belong to the group and get to know each other,” she says.

With the outdoor renovation complete, the couple and Wideman turned their attention to an indoor refresh. The couple’s must-haves included new and improved kitchen appliances, a brighter, lighter kitchen with a more functional island, new furnishings throughout, hardwood flooring on the main floor and a cohesive design for the primary bedroom and bathroom. Faller wanted a neutral color palette so she can change pillows, throws and accessories with the seasons or holidays.

In the hearth room, Wideman replaced white ceiling beams with the same white oak used for new flooring throughout the main floor. The hearth room, breakfast area and kitchen flow together, so Wideman brought a wood element to the kitchen with live edge wood at table height surrounding the new island. A butler’s pantry was removed, and an oven and microwave relocated to the two-tiered island, which is painted Sherwin-Williams Urbane Bronze. The island also contains a prep sink—one of Faller’s must-haves. “The island went from being poorly used cabinet space to being a space where we can have another family over for dinner, and we can all sit in the kitchen if we want,” says Faller. Wideman drew further attention to the island by laying the white oak flooring in a herringbone pattern framed by straight-line planks.

Wideman also used Sherwin-Williams Urbane Bronze for new cabinetry in the home’s primary bathroom. The piece-de-resistance, however, is her redesign of a column, which previously sat on the edge of a tiled jetted tub which was removed and replaced with a freestanding tub. Leaving the original shower footprint intact, Wideman widened the column’s base and extended it into the shower, where it provides a seating ledge. She clad the column in 3/8” by 3/8” glass tiles and topped the shower bench and vanity counters in quartz.

In the primary bedroom, located on the home’s main level, “I wanted to give them a feeling of a retreat—peaceful and relaxing,” says Wideman, who used a soothing gray, taupe and cream color palette. New French doors lead out to the new hot tub and redesigned patio spaces.

Berkley Construction, the home’s builder, also handled the renovations. Company owner Bob Berkley says although he built the home “to last forever,” Wideman’s designs “are so great I wasn’t surprised the owners wanted to do this.” He says the column extending into the primary bath’s shower and the kitchen’s live edge eating area exemplify Wideman’s creativity. “It’s amazing how she sees things differently than other people,” says Berkley. “It’s always fun seeing her vision come to life.”

The renovation process took six months; Faller, Mills and the pets lived in the finished basement with the children remaining in their second-floor bedrooms. “You have to get to a certain point to be ready to undertake such a project,” says Faller. “However, if we had done this piece by piece, we would not have ended up with something we like as well as the end result.”  The house is finally, truly the couple’s dream home. And it feels like theirs.