When her clients opted for coral as their favorite color, designer Jenny Rapp met the challenge. 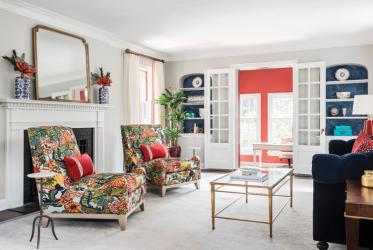 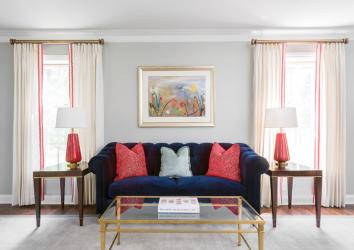 The living room’s basic color scheme—a harmonious blend of coral, shades of blue and gold metallics set against a neutral background—is illustrated by this vignette. 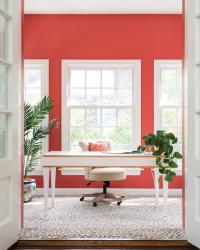 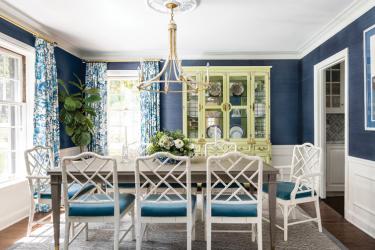 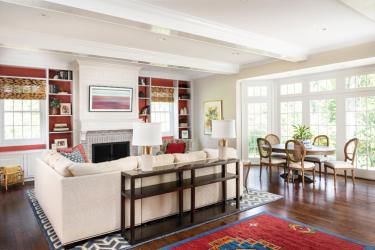 Fresh, warm and inviting, the family room palette was drawn from the Moroccan rug in the foreground. Above the fireplace, the overmantel was built out to hide wiring for a Samsung Frame TV that displays artwork when not in use. 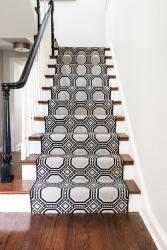 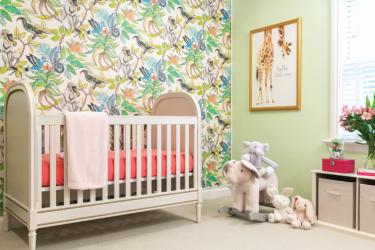 Responding to the owners’ request for a “gender-neutral” nursery, Jenny created a charming jungle fantasy garden with Cole & Son’s Savuti wallpaper, pale chartreuse walls and a Pottery Barn crib with coral bedding. Left: Tucked into a quiet corner is a comfy swivel rocker from KDR, custom-upholstered in a stain-resistant Thibaut print fabric. 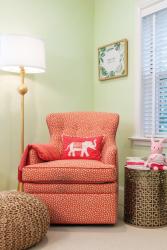 Skillful use of color is fundamental to any interior design project. The expert professional is well aware that color choices not only affect how a space looks but also how it feels. In the design world, it’s referred to as “color psychology” and can significantly influence a client’s satisfaction with the end result.

Founder and principal of JCR Design Group, Jenny Rapp has more than 15 years of experience in the local industry. Rather than offering a “signature” design style, she attributes much of her award-winning firm’s success to the development of a close working relationship that focuses on the client’s unique needs and preferences. “It’s a partnership, a process of listening carefully to the client’s wants, then interpreting them,” Jenny explains.

In this case, her clients were a young couple who had purchased a 1940s brick two-story in Ladue. They loved color and wanted to completely revitalize the traditional décor of their newly acquired home. Specifically, their vision was to create something “fresh, and fun,” cozy and comfortable for their growing family.

Although the project is still ongoing, phase one concentrated on the main-level activity areas. No major structural changes were planned, but the kitchen appliances , backsplash and countertops were updated, the carpeting replaced and the wood floors refinished in a dark walnut. Jenny was free to select all-new furnishings throughout, but curating the palette presented something of a challenge.

Early on, the owners identified coral as one of their favorite colors, with various shades of blue as a close second. “Coral is warm, energetic and happy,” says Jenny, “and blue would be an effective complement,” but coordinating the vibrant hues was going to require some ingenuity. Ultimately, she and the homeowners decided to use coral as the primary color in certain places and as an accent in more neutral areas, layering the colors to establish a visual flow from space to space.

The “fun” element is heralded in the entry foyer, where a bold-patterned black-and-white runner from Stark Carpet lines the staircase. The handrail was painted black, and the treads were refinished to match the flooring. To achieve a sophisticated ambience in the adjacent living room, Jenny chose pale gray for the walls, white for the fireplace mantel, surround, and trim and a bordered wool rug in cool gray to ground the furnishings.

Against this fresh, neutral background, coral makes its inaugural appearance. Flanking the fireplace are two custom-designed, oversize slipper chairs upholstered in an exuberant Chiang Mai Dragon print from Schumacher. The chair bases are painted gold, introducing a metallic touch which is repeated in the drapery rods and brass-and-glass coffee table. Edged in coral, the natural linen drapery panels reinforce the color and, readily visible through French doors, the walls of the wife’s adjoining office are painted the same dramatic hue.

Originally a sunroom, the office has large windows on three sides, allowing for the liberal use of coral on the remaining wall space. To prevent the color from being overwhelming, the furnishings are kept simple—soft gray carpeting in a subtle cheetah print, a sleek white lacquer writing desk accented with gold striping and a swivel chair in natural linen.

Rather dark and dated, the formal dining room needed a major overhaul. Jenny and the homeowners gave the space a suitably dignified ambience with sapphire blue grasscloth walls, crisp white wainscoting and a Dana Creath chandelier with gold leaf finish and crystal beads. Underfoot, gray carpeting in a muted abstract animal pattern from Prestige Mills was sized and bordered as an area rug. Since a “too formal” look would have been inconsistent with the couple’s youthful lifestyle, they chose a gray-finished Century dining table surrounded by white Chinese Chippendale chairs, coordinating the high-performance velvet cushions with a shade of blue in the Clarence House Congo drapery pattern.

The breakfront was a “find” the owner had purchased. Originally a dark cherry, the piece was refinished and lacquered in pale chartreuse by The Resplendent Crow. Although initially somewhat hesitant about the color, Jenny is pleased with the fresh touch it adds to the space.

At the rear of the home, the family room was a previous addition and a priority for the new owners. Interestingly, the color scheme for this comfortable activity space was drawn from a rug the couple had acquired on a trip to Morocco. “We used the darker shade of coral in the rug and repeated it behind the built-in bookcases flanking the windows,” Jenny notes.

Creamy walls brighten the space; the brick surround of the fireplace was painted a light gray, and the overmantel was built out to hide wiring for a Samsung Frame TV that displays artwork when not in use. A second area rug from Stark Carpet defines the seating area and duplicates the blue in the Moroccan rug.

Sourced from Hallman Furniture, the sectional was custom-built, sized for the room and covered in a durable, textured, neutral-toned fabric. Matching lamps with brushed gold bases bracket the transitional-style sofa table, and the casual dining area is furnished with an oval pedestal table and chairs from the owners’ former residence.

Upstairs, the nursery is an enchanting departure from typical baby-room styling. As a starter family, the homeowners had requested a gender-neutral décor, and the homeowner found a Cole & Son’s Savuti wallcovering, a delightfully quirky African jungle garden print. The streamlined crib is from Pottery Barn, and pale chartreuse walls, complemented by muted multi-green tweed carpeting, create a soft, soothing ambience. In one corner, a cozy swivel rocker from KDR is custom-upholstered in a stain-resistant coral Thibaut fabric, offering a snug retreat for fussy nights and nap times.

Fresh, fun and colorful, this gracious residence is everything the owners had hoped for—another example of JCR Design Group’s extraordinary ability to create a beautiful, functional living environment that truly reflects the unique needs, taste and lifestyle of its clientele.