Pops of color yield youthful energy in this “right-sized” new build with a vintage vibe. 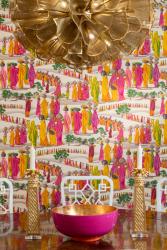 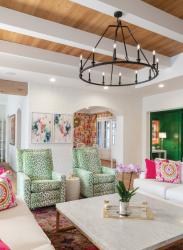 “When you come into the green lacquered foyer (visible through the opening at far right), you know color is a thing in this home,” says interior designer Kate Convy. The furniture lines were kept simple, to allow fabrics to pop. “It feels clean,” says Convy. “It’s not cluttered at all, because the saturation of color fills space.” 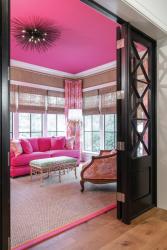 Paint is easy to change if you want to try a bold look like the library’s pink ceiling. “A lot of times people relax when you say that,” says interior designer Kate Convy. This homeowner was all in, however, she says, noting the library is one of her favorite rooms. Chunky grasscloth wallpaper and a double-bordered sisal rug add texture to the cheerful pink and orange fabrics used for the upholstered furniture and draperies. 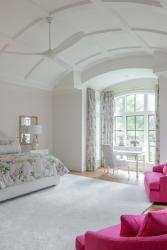 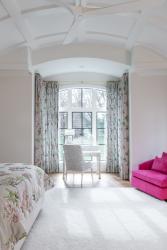 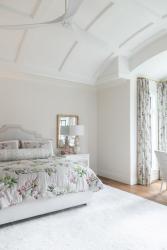 The owners’ bedroom features a more subtle and serene color palette, with a pair of pink chairs adding a pop of color. The understated fabrics allow the magnificent, coffered barrel vault ceiling to take center stage. The wife gives credit for the ceiling to designer Keith Gegg of Gegg Design & Cabinetry, who also designed the home’s award-winning kitchen. 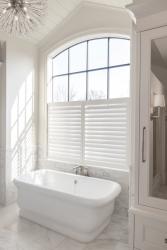 The owners’ bathroom includes two water closets, a design idea borrowed from their home in Florida. The walls of the water closet pictured at the far end feature hand-painted floral motifs inspired by the adjacent bedroom’s fabrics. The other water closet carries the same color pallet on the ceiling. 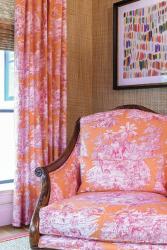 This Manuel Canovas toile inspired the color palette for the library’s hues. Interior designer Kate Convy describes the lines of the home’s furnishings as clean and classic. 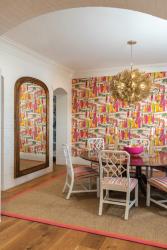 “I know a lot of people don’t care about dining rooms, but we do,” says the wife. “We enjoy entertaining.” A bold Manuel Canovas fabric and statement light fixture command attention in the room which mixes an antique table purchased in San Francisco with a new mirror, a Restoration Hardware find. 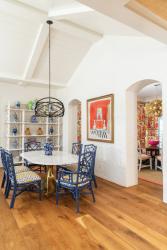 Painted brick interior walls were on the owners’ wish list for their new home. Visitors often say they think the home is a renovation rather than a new build. “We both consider that a compliment as we tried to give it some age with the interior brick walls, beams in the kitchen and other elements,” says the wife. The light fixture over the casual dining table brings an unexpected industrial vibe to the home. Flooring is oil-rubbed, 10-inch-wide white oak installed by Eu Great Hardwood & Tiles. 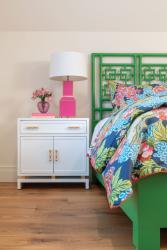 Interior designer Kate Convy says furnishings in the new home, including the lacquered green bed in an upstairs guest room, represented “an entirely new direction” for the homeowners, whom Convy worked with previously. “They didn’t bring one piece of furniture from their previous house, which featured Country French design,” says Convy. “It was a fresh start.” 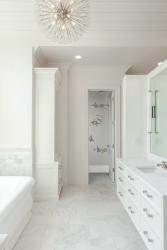 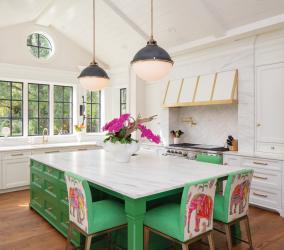 Depending on the circumstances, bigger is not always better. The owners of this cheerful house have owned several homes over their many years of marriage.

While their previous home was magnificent, it was larger than they needed at this point in their lives, and it turned out to be too far away from the couple’s grown children and grandchildren living in Frontenac. “They weren’t stopping by to have lunch when we were out there at St. Albans,” the wife quips. Driving in and out of the city several times a day became inconvenient. So the couple decided they would move closer to their kids and simplify their lives at the same time. A vacant lot in Frontenac—10 minutes from both their son and daughter—fit the bill.

The husband had definitive ideas of what he wanted in the new home. “He’s probably the most hands-on, involved client I’ve ever had,” says Dick Busch, principal of Dick Busch Architects. “He knew what he wanted.” First and foremost? A home that was much smaller and more understated than the St. Albans residence. Busch says the client shared a picture of a painted brick house with a shake roof and black-framed windows. “We both loved the photo, and we tried to be faithful to that look,” says Busch. The client also wanted interior brick walls and a screened-in front porch with a front courtyard. These wish-list items were fulfilled in a home with over 5,000 square feet on the main floor and two guest bedrooms and bath upstairs.

Busch describes the home as classic cottage style. “He likes old houses,” Busch says of the husband. “A lot of old houses had screened-in porches on the front.” Similarly, the painted brick walls defining the dining room lend a vintage air. “Everyone coming in thinks this was an existing house we rehabbed,” says interior designer Kate Convy. The wife agrees, noting she and her husband consider it a compliment when people think the house is a remodel. “We tried to give it some age with the interior brick walls, beams in the kitchen and other elements,” the wife says.

The use of color, however, gives the “I-think-it’s-old” house youthful energy. “I wanted to go brighter in this home,” says the wife. “I did a little storyboard of what I wanted, which was pinks, greens and oranges, and that’s what we ended up with. Kate helped me see how you could ground these bright colors with a few older things.”

The principal of Partners in Design, Convy found an antique secretary in Atlanta and placed it in the library, which features a ceiling painted pink. “There are so many wonderful ceilings in this house that didn’t need a pop of paint or wallpaper, so this room was the only place to do something like this,” Convy says of the saturated hue, inspired by a Manuel Canovas toile utilized on an upholstered chair and window treatments. Convy added texture to the room with a chunky grasscloth wallpaper.

Many clients are afraid to incorporate bold colors, fearful of making expensive mistakes or tiring quickly of audacious shades. “Tile is hard to change but paint is easy, and many times people relax when you say that,” says Convy. “I said, if you don’t like the pink ceiling in here, we’ll paint it white. Let’s give it a try, and 95 percent of the time it’s worth it.” Indeed, the wife says the library is one of her favorite rooms in the home.

In the dining room, the husband wanted a round table so everyone gathered can be seen and heard. Convy found an antique table in San Francisco that the couple purchased based solely on photos. A daring fabric featuring shades of orange and pink is carried from the draperies onto an accent wall. Mixing old with new, the full-length mirror is a Restoration Hardware find. Underneath, a double-bordered sisal rug helps protect the oil-rubbed white oak floors.

Convy says the couple was mindful that the thoughtful design of this home would allow them to age gracefully in place. Such elements include locating their bedroom on the main floor and installing a zero-entry shower in their bathroom, which also includes two water closets, a clever design inspired by a similar layout in their Florida home. “We both have our own space to get ready and that’s something we really appreciated,” says the wife.

She says their bedroom is one of her favorites in the home. “It may seem like a bit of a departure because it’s not as bright as the other rooms, but it’s peaceful,” says the wife. Upholstered chairs in a cheery pink pop against the muted tones of the bedding, window treatments and creamy rug. The understated furnishings also allow the magnificent ceiling to take center stage. The wife gives credit for the coffered barrel vault ceiling to Keith Gegg of Gegg Design & Cabinetry, who also designed the home’s award-winning kitchen. “He has such an artistic eye,” says the wife.

During construction of the home, the couple rented a small villa after the St. Albans home had been sold. “I think we both realized, living in the villa, we can be just as happy in something very simple,” says the wife. “You realize your kids don’t want your stuff, and with just the two of us, we don’t need that much space.”

With thoughtful, well-executed design and a vibrant color palette, the home “just feels good,” says the wife. “It’s just the right space for what we need at this stage of our lives, and it makes me feel happy.”