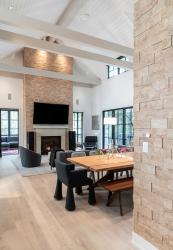 “I’m a bit of an audiophile,” the husband admits, so he wanted an acoustically-sound great room. Because the great room’s beams aren’t structural, they could be left open and filled with sound-baffling material to reduce echo and absorb sound. The fireplace is clad in Italian cork tile, which also helps break up sound. “I found this pattern that looks like brick, which I also thought would add some texture,” says the husband. 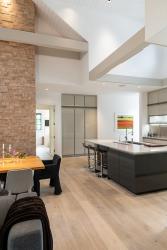 Martin Goebel & Co. crafted the dining table from a fallen tree in Tilles Park, where the homeowners’ children played as little girls. “This dining table is central to the whole house,” says the husband, who notes it has a no VOC finish and can seat 14.

Sleek Poggenpohl cabinetry surrounds a GE baking oven, warming drawer and Wolf steam oven. “If I had to get rid of everything in the kitchen except one item, I’d keep that steam oven,” says the husband, an enthusiastic and talented cook. Appliance garages to the left of the induction cooktop house oils, vinegars and spices in addition to small appliances. Gray quartz on the perimeter countertop mimics concrete. 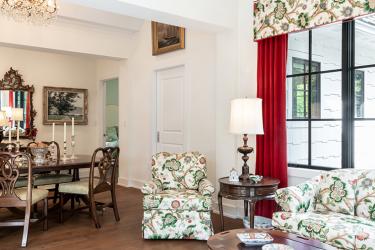 The husband’s mother lives in a two-bedroom “cottage” attached to the main home.  Although it was difficult to pare down her beloved furnishings and antiques from her previous homes, “she loves it now,” says the homeowner. “She’s independent in her own space,” which includes a full kitchen, laundry room and two bathrooms, all ADA compliant.. 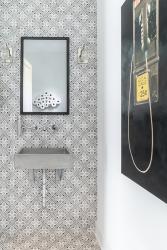 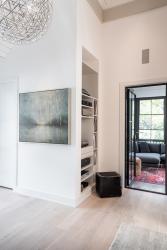 The homeowners wanted a modern design for their new home, a style completely different from any of their previous residences. Flooring is a whitewashed white oak with a no VOC finish. 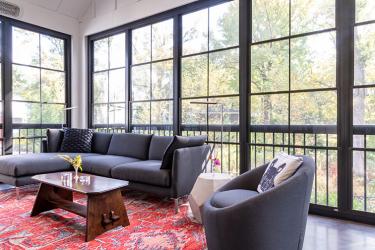 A screened-in porch or three-season room was a “must-have” for the wife. With plastic windows and a wood stove, “we use this even in the dead of winter,” says the husband. “It’s way more useful than you might think, so it’s really become a four-season room for us.” 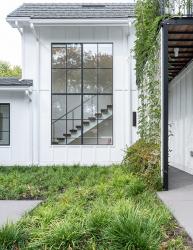 “My wife and I work hectic jobs, so we wanted the house to be calming when we came home,” says the husband. 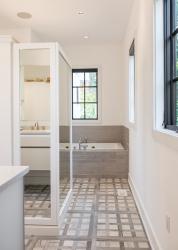 The master bath is a study in serenity in tones of gray and white. 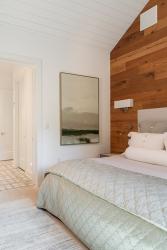 A focal wall in the master bedroom utilizes the same wide-plank white oak used for the flooring. A clear non-VOC finish on the wood lets the wood’s natural beauty 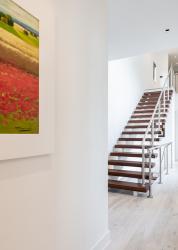 The porte-cochère connects the main house to the mother-in-law’s “cottage.” Natural landscaping equates to less maintenance and less water usage for the homeowner. “There is no grass anywhere on my property,” he says. Kirkwood Stair & Millwork constructed a strikingly modern stairway of wood risers and steel railing. Sleek Poggenpohl cabinetry surrounds a GE baking oven, warming drawer and Wolf steam oven. “If I had to get rid of everything in the kitchen except one item, I’d keep that steam oven,” says the husband, an enthusiastic and talented cook. Appliance garages to the left of the induction cooktop house oils, vinegars and spices in addition to small appliances. Gray quartz on the perimeter countertop mimics concrete.

When planning a new home, many people dream of a gourmet kitchen, a luxurious master bath and high-end finishes. We see those elements every day, making them top of mind.

Equally important is what we don’t see—what’s “behind the drywall,” says Jeff Bogard, founder and president of R.E.A. Homes. “A properly built shell, which includes the design of the HVAC system, insulation, right-sized ductwork and so on, has tremendous impact on comfort, energy efficiency and helping create a healthier indoor environment,” says Bogard, who has built his company constructing what he calls “High Performance Luxury Homes.”

He says R.E.A. Homes is currently one of the only ENERGY STAR® certified custom home builders in the area. Bogard has been designated a Master Certified Green Professional™ by the National Association of Home Builders, and he earned the LEED Green Associate credential—considered the gold standard for energy efficiency, indoor air quality and overall construction practices—from the U.S. Green Building Council. Bogard says these energy efficient homes maximize comfort, resulting in less hot and cold spots as well as eliminating drafts.

R.E.A. Homes has the kind of portfolio the owners of this Ladue modern farmhouse were looking for. “I wanted a high-efficiency, low-maintenance home that would still be comfortable when our two daughters came home, with plenty of room for them, but also worked for us now,” says the husband. At the same time the soon-to-be empty nesters were planning their new home, the husband’s mother contemplated moving in with them to be closer to family. Discussions within the family and with architect Allen F. Roehrig, principal of Mainline Group Architecture, ultimately resulted in the design of a main home of approximately 4,000 square feet with an attached 1,800-square-foot mother-in-law "cottage."

In the building process, Bogard used several strategies to maximize comfort and energy efficiency. A combination of closed cell foam, blown-in insulation and insulation bats, for example, resulted in a R-21 rating for the walls. On the home’s exterior, Bogard used an upgraded Tyvek wrap product combined with a rainscreen before adding the white siding. “The rainscreen gives moisture a place to drain out properly and escape,” says Bogard. “We use nationally recognized, best-building practices throughout the home to minimize any chances of problems associated with the effects of St. Louis weather patterns.”

A rooftop solar electric system will pay for itself in about seven years, according to the homeowner. “It made sense to me that if we were building a new house we planned to stay in for a long time, then there would be a payback to installing the solar panels,” says the homeowner. Electricity from the solar panels powers the home, including the geothermal heat pump, also called a ground source heat pump. Marc Bluestone, president of SmartHouse Heating and Cooling, explains that geothermal transfers heat to or from the ground. It uses the stable temperature of the earth as a heat source, Bluestone says, but is powered entirely on electricity.

These homeowners “made wise, intelligent choices in aligning their energy sources so they are producing electricity through the solar electric system that they are then using to heat and cool their house,” says Bluestone. Their geothermal system consists of variable capacity heat pumps which can scale down to 30 percent of their capacity. “It’s like the gas pedal on your car,” Bluestone explains. “Going downhill, you need to apply the gas very little. When going uphill, you apply more. These variable capacity heat pumps work the same way.” According to industry experts, geothermal systems can offer between 25 and 50 percent savings on heating and cooling costs compared to conventional fossil fuel systems. This heating and cooling system leads to an overall higher comfort level within the home.

A home’s energy performance can be rated by the Residential Energy Services Network, which assigns a Home Energy Rating System (HERS) index, the industry standard. A rating technician examines the home throughout the construction process, checking variables such as air leaks in the building envelope and HVAC distribution duct leaks. When construction is completed, the rater assigns the home a score, which can range from 0 to 150. Bogard says this index is “just like golf, the lower the score the better.” A home with a HERS score of 0, a highly unusual score, produces or conserves as much energy as it uses.

“This home actually received a negative HERS rating, which means it was less than zero,” says Bogard. “No other home that I’ve built, and no other home that I’m aware of in St. Louis, has received a negative HERS rating, which means depending on the time of day and time of year, the home’s solar electric system is producing more energy than the home is consuming.” In addition, the home meets Indoor airPLUS construction specifications established by the Environmental Protection Agency. Every Indoor airPLUS qualified home is also ENERGY STAR® certified.

Even with all this attention to detail "behind the drywall," what’s in front of the drywall is equally impressive. Stylistically, the homeowners wanted a home with a modern, “almost Scandinavian feel inside, completely different from anything we’d had before,” says the husband.

The husband, the cook in the family, wanted a kitchen connected to the living and dining spaces. With the help of designers at Beck/Allen Cabinetry, the layout ensures the husband is facing the great room while working at the island sink. Topped with a white quartz, the island holds a trough cleverly positioned in front of the sink’s faucets. “It serves two purposes,” says the homeowner. “People helping prep on that side can cut and scrape into the trough, which has a garbage disposal in it. And when we have friends over, we fill it with ice and put drinks or shrimp cocktail in it, so it becomes a serving station. It’s a cool feature.”  The idea of the trough came from Stacy Stratmann Galt of French Wench Interiors.

The kitchen is visually connected to the large great room. “It’s one of only two spots to hang out in the house,” says the husband. “This brings the family all together and that’s what we wanted.” Declaring that he’s a “bit of an audiophile," the husband wanted an acoustically sound great room, eliminating echo as much as possible. To help address this, the fireplace and an opposite wall are clad in Italian cork tile. “This absorbs and breaks up sound,” says the husband. “The pattern looks like brick and has some texture.” Because the ceiling beams don’t provide structural support, the tops were left open and filled with sound-baffling material to help absorb sound.

With such careful attention to design, construction and materials, the finished home fulfills the owners’ vision. “We have a calming place we just love,” says the husband. “It works for our family now, and it’s going to work in 25 years when we are older.” Those words are music to Bogard’s ears. “I think most of our clients would say they have a superior living experience inside their home,” he explains, “not just what it looks like but how it feels to live in it.”