Designer Candice Wideman guides a young family in making a 1930s Ladue home their own. 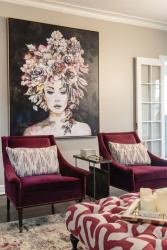 The floral wallpaper above the fireplace on the opposite wall inspired the selection of artwork featuring a floral motif. The bold giclée print by Jackie Von Tobel hangs behind mulberry chairs – one of several pops of color throughout the home. 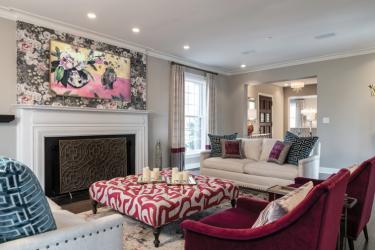 Wideman selected a wallpaper to highlight the slightly protruding wall above the fireplace; this wallpaper drove the color palette of teal, cranberry and purple for the living room accents. The custom drapes by Norma O’Bryan feature three different fabrics and include a band of color coordinated with the bold chairs and custom ottoman by CR Laine in “Kuba Raspberry.” The “art” above the fireplace is actually the family’s TV which came preloaded with works of art. 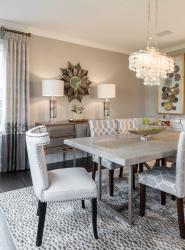 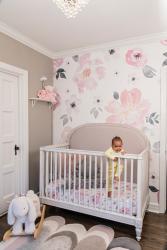 Homeowner Brandi Williams “had a lot of her hand in this room. It was her first baby, and you want to do it yourself,” says Wideman. Williams found the wallpaper mural which influenced the design decisions. “We wanted something soft and pretty with little pops of pink that a little girl can grow into that space,” says Norma O’Bryan of Discount Draperies. 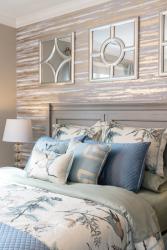 Designer Candice Wideman selected a wallpaper with metallic accents which picks up the colors in the bedding. 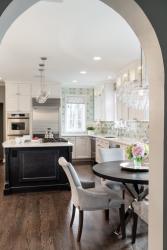 New white cabinets and a white quartz countertop visually enlarge the smallish kitchen. Homeowner Brandi Williams says the backsplash—a glass and marble mosaic tile—is one of her favorite elements in the home. The round table “scoots up to the built-in bench and doesn’t impede circulation in the room,” says interior designer Wideman. The Regina Andrew chandelier over the table adds a whimsical, modern touch. During renovations the original hardwood floors were refinished in a darker stain. 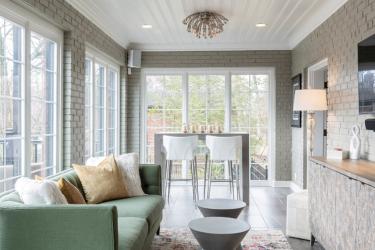 A family favorite in the summer, the sunroom’s furnishings serve multiple functions—entertainment space, TV room, and work-from-home space, thanks to the concrete pub-height table. Small, round concrete tables don’t impede circulation in the long, narrow space and can’t be accidentally knocked over. 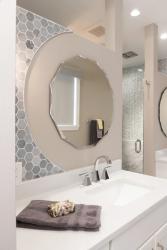 The bath’s sink area is somewhat open to the adjoining owners bedroom, so color and material choices needed to coordinate. Wideman brought the "wow" by mimicking the curve of the mirror with a semi-circle of tile. “It adds some neat interest to the space,” says Wideman. 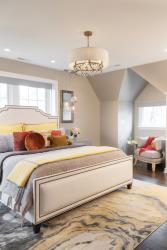 Interior designer Candice Wideman kept the owners' bedroom color palette and furnishings peaceful and serene. “The way the ceiling slopes and the wall juts out limits the amount of furniture you can do, which was unnecessary anyway because of the large master closet nearby,” says Wideman. Upholstered bed is from Ethan Allen.

Doug McLaren and Brandi Williams were looking for a centrally located home with sizeable outdoor space to begin their lives as a married couple. After looking at several homes, they found a 2-story brick home in Ladue close to major interstates. Completed in 1939, previous owners had retained much of the home’s character including an exposed limestone basement, handsome millwork and original wood flooring.

The couple also appreciated the home’s updates including new plumbing, windows, HVAC and foundation work. While it lacked the true open concept of today’s new homes, the rooms flowed easily from one to another. Large windows filled the space with natural light. “It had good bones,” says McLaren. “We could see we could build on the home’s character and what had already been done to create our own space.”

To help guide them, the couple turned to interior designer Candice Wideman, owner of Youtopia Designs, LLC. A former neighbor of McLaren’s referred Wideman to the couple. “Doug had a condo in the Central West End, and Brandi had a home, so there was a lot of mismatched furniture when they came together,” Wideman recalls. “We started with a clean slate, both with furnishings and with their goal of making this house in Ladue something that reflected them.”

Williams agrees. “I would say our style is clean, classic, with an edge of personality,” she says. Neutral walls and white cabinetry in the kitchen provide the perfect canvas for pops of color, but Williams feels the overall effect of this home is “a little more mature.” In her previous home, “I had a room with purple walls,” she says. “This is a little more modern, but still reflects our personalities.”

Every room received Wideman’s professional touch, but one of the most extensive renovations occurred in the kitchen. White cabinets and a white quartz countertop visually enlarge the smallish kitchen. Wideman painted the island black for visual interest, but the "wow" factor comes from the backsplash. A glass and marble mosaic tile from Soci in muted shades of aqua and sea green extends from the countertop to the ceiling. Nearly two years after renovations were completed, “I am still crazy about how this tile came together for the backsplash,” says Williams. “It’s one of the examples where I think Candice really knocked it out of the park.”

To maximize space in the kitchen, Wideman added a built-in bench and a round table for casual meals for the family, which now includes two-year-old daughter Saylor. “Even though this corner is a small area, I wanted a statement piece over the table,” says Wideman, who chose a Regina Andrew chandelier from the “Bubbles”’ collection for a whimsical, modern touch.

Both Williams and McLaren say they spend a lot of time in the living room enjoying the fireplace on winter evenings. They say Wideman proposed pieces they would never have considered such as the custom ottoman and bold mulberry chairs. Over the fireplace mantel Wideman chose a floral wallpaper that inspired the selection of a giclée print by Jackie Von Tobel hung on the opposite wall. Custom pillows and draperies by Norma O’Bryan of Discount Draperies add the finishing touches. “They just bring a room together,” says Wideman.

O’Bryan used three different fabrics for the living room’s custom drapes. “Candice had selected a fun color for the chairs and the ottoman, so we did a contrast band in that same shade to pull all the colors together,” says O’Bryan. “We also did a neat little cornice over the window between the bookshelves for something different.”

Just off the living room is a sunroom which is a family favorite in summer. Wideman says the couple wanted the space, which overlooks the backyard, to be a multifunctional room—good for entertaining, watching TV as a family, and working from home. Mindful of the room’s long, narrow footprint, Wideman placed small, round concrete tables in front of the sofa. A pub-height concrete table has done double-duty during the pandemic as one of the stations for Doug or Brandi to work from home. The concrete tables have acrylic seals to prevent staining.

One of the many benefits of working with an interior designer is trusting the professional to present ideas for creative, innovative ways to bring a homeowner’s vision to fruition. Williams says the light fixtures throughout the home — many obtained through Wilson Lighting — are such an example. “I would never have found these on my own or even thought to look very hard for them,” says Williams.

Another area where Wideman’s creativity “knocked it out of the park” for Williams is the master bath. Wideman says the master bath’s sink area is somewhat open to the master bedroom. “Whatever we did in the master bath needed to coordinate with the master bedroom because of the openness,” says Wideman. A serene, neutral color palette flows through both rooms, but Wideman brought the "wow" by designing a half-circle of tile to surround a round mirror with a contemporary, beveled edge. “I thought it would be cool to mimic the curve of the mirror with tile to add some interest to the space,” says Wideman. “I had to get the mirror first and create some detailed drawings with the exact arc, length and radius for the tile installers,” Williams says the master bath tilework, including the shower, is “spot on. One of my favorites.”

When they first viewed the home, McLaren and Williams visualized what the home could be. “It wasn’t exactly what we wanted, but it had the potential for us to be able to make it our own,” says McLaren. “And we did that. We are super busy,” he adds. “It’s so nice to come home and feel that the house isn’t too fussy, but it looks really good and it just feels good, too. Candice helped us give it that kind of style that we have really enjoyed.”