A couple takes inspiration from their time in Hong Kong and brings it home for an inspired outdoor space. 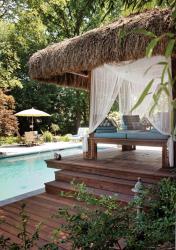 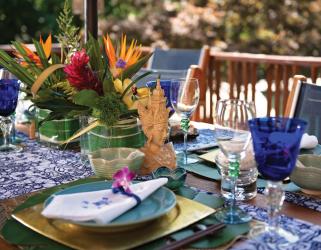 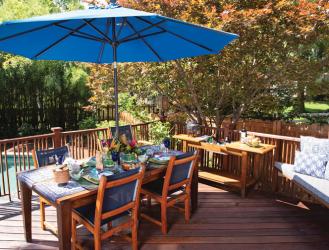 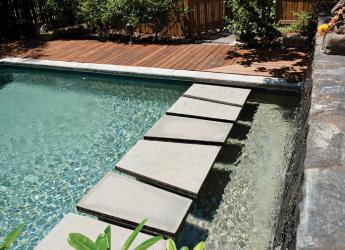 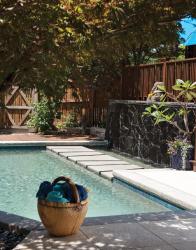 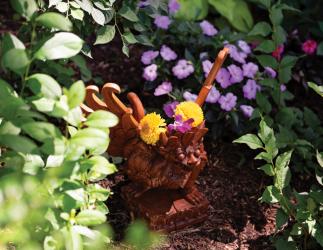 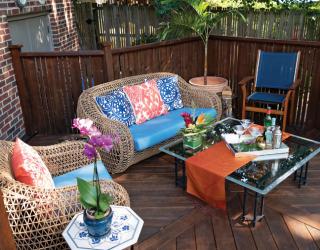 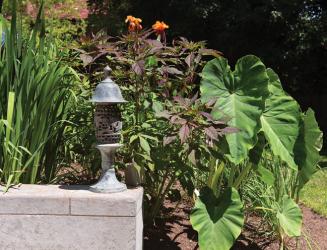 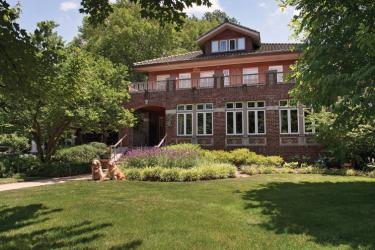 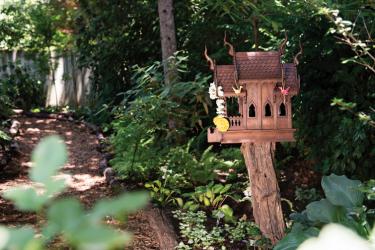 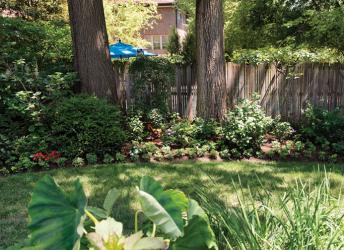 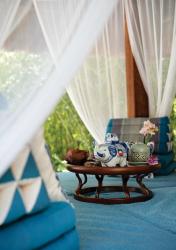 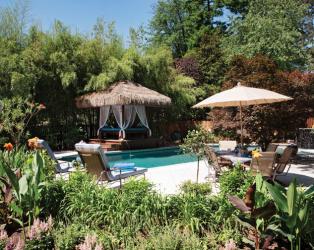 There are thousands of places around the world where writers and historians have declared that East meets West. A house and garden in Clayton, MO, is not likely to be on that list. But it should be.

Ward and Carol Klein’s home is a stunning infusion of Asian design and appreciation in the heart of the Midwest. Their Craftsman-style home had always had hints of compatibility with Japanese design as evidenced in Frank LLoyd Wright’s Prairie Style and California Craftsman homes of the same period. But before the Kleins and their two children, ages 10 and 13, moved to Hong Kong in 1999, those were just suggestions.

As Area Chairman of Operations Asia Pacific, for Energizer Holdings, Ward traveled extensively during the two years they lived in Hong Kong. The couple also used every opportunity to travel with their children. The more they saw of Asia, the most fascinated they became with the architecture with its horizontal lines, graceful curves, symmetry and harmony with the environment. They loved the emphasis on nature and natural beauty; of finding beauty in unexpected places and bringing spirituality into their homes and gardens.

The couple had rented their Clayton home while they were in Asia, and when they returned home in 2001, they decided it needed renovation both inside and out. Their newly found love of Asian design influenced much of that renovation including the creation of a backyard pool. “We didn’t want just a rectangular pool; we wanted something unique,” Carol says.

Carol had been collecting pictures of the type of outdoor space she wanted, including the landscape that surrounded it. Important to that design was an Indonesian-style, open-air, thatch-roofed platform or bali designed for relaxation and positioned to catch the slightest breeze. She also wanted something in the design to suggest the volcanic nature of many of the Asian islands. To make their oasis come alive, they contacted landscape architect Ted Spaid, founder of SWT Design. “We had a lot of pictures and we worked with a lot of talented people,” Carol says of the design process.

While Ted worked on the landscaping and pool, architect Mark Critchfield concentrated on the bali. Creativity was all important. Not sure what they would do with it, Carol and Ward had lugged a carved wood table on the plane home with them. Miraculously, it found its way to the bali with the surface of the table becoming a ceiling medallion at the top of the structure and the carved table legs incorporated into the bali’s corner supports. Thatch for the roof came by way of a company in San Diego that sells grassy roof tiles. Rather than spouting into the pool, the couple’s waterfall slides down a black, slate surface. Just in front of the waterfall, Ted designed a series of stepping stones that seem to float on the surface of the water and bring a visitor across the pool to the serenity of the bali.

A living, leafy screen of fluttering bamboo catches the breeze behind the bali and provides the compatible landscaping that Carol desired. Mindful of bamboo’s invasive character, Ward emphasizes that it needed to be professionally installed with the proper barriers to keep it in check.

A multi-level deck of tropical hardwoods connects the house to the pool area and adds an additional feeling of serenity to the space. Carol has coordinated the blue cushions of the bali with the pool tiles and the table settings that she uses to entertain. Most of the items that decorate her tables are things she brought back from their two years in Hong Kong.

While Carol specialized in the design of the pool and bali, Ward acted as the plantsman for the project. With a love of gardening he traces back to the magical hours spent in his grandmother Klein’s terraced garden overlooking the Racoon River in Des Moines, IA, he had two different projects to deal with. One was the creation of a tropical paradise in the spaces surrounding the pool. The other, a lush shady border was called for in the rest of the yard.

A berm-like raised bed, created from the dirt remaining when the workers dug out the pool, provided the perfect place for Ward to experiment with sun loving plants. This year, elephant ears and cannas are part of the mix along with daylilies and irises. Pots of brilliantly colored hibiscus and oleander accent the pool deck as do the three plumeria trees, created from cuttings the Kleins brought back with them from Hong Kong. Best known for its fragrant flowers used to create Hawaiian leis, the Kleins have found their plumeria easy to care for even in the frigid Midwest. As winter approaches, Ward explains, the plumeria goes dormant and into the basement, where the pots sit without water or sunshine until spring. Once the pots are brought out in spring, watered and fertilized, the plants magically produce leaves and begin flowering.

Like the sun garden, Ward created the shade garden from scratch, first removing layers of invasive honeysuckle. In its place, he created undulating beds anchored with azaleas, viburnums, hydrangeas, witch hazel and holly. Ferns and hostas accent the middle of the beds with shots of color from impatiens and variegated lamium toward the front. He also has inserted into the mix more unusual shrubs such as “Sun King” Aralia with its bright gold leaves and “Gold Dust” Aucuba, which sports glossy green leaves liberally sprinkled with yellow spots. “Double Delights Stargazer” lacecap hydrangeas, with layered pink blossoms edged in white are new to his shady areas this year.

Even in the shade garden, the couple’s love of things Asian comes through with the insertion along the pathway of Balinese, carved, wooden sculptures. A spirit house to provide a space for protective spirits to dwell sits on an old tree trunk and is decorated with a floral lei as offering to please the spirits as it would be in Thailand. A little further on, a tiny carved wooden Balinese sculpture, nestled in among some impatiens, is also decorated with flowers. Carol loves tucking random blossoms into ordinary things, such as a basket of towels, to create beauty in unexpected places.

While the Kleins’ garden and the surrounding setting is a tribute to the grace and serenity of Asia, it did not come about without some American hard work. When it came time to mulch the yard, Ward spread all 14 cubic yards himself and considered it a substitute for his normal gym workout. “I logged over 35,000 steps in two days and I never left the yard,” he says with a laugh.