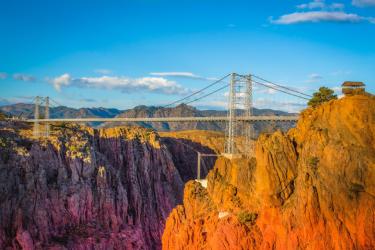 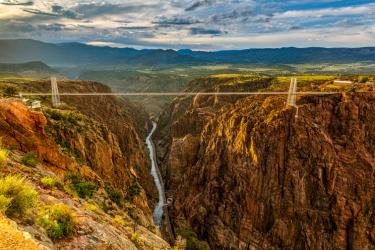 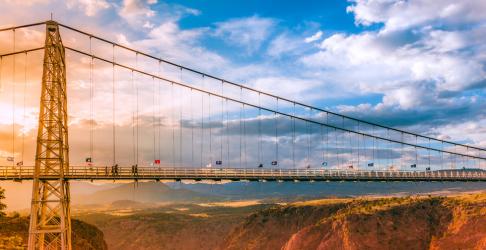 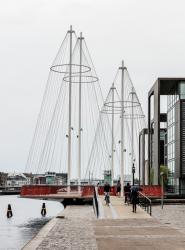 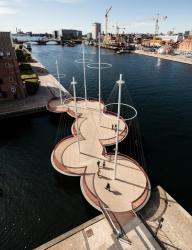 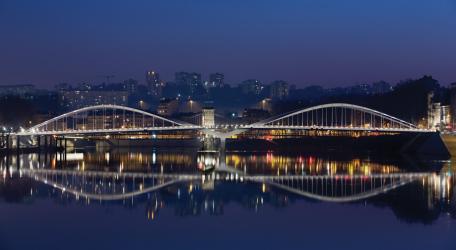 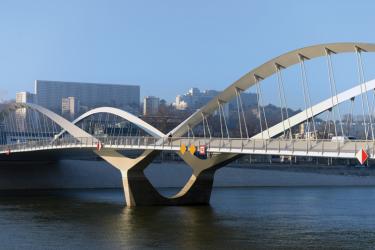 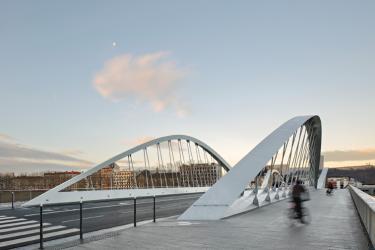 Royal Gorge Bridge, Canon City, CO:  The first train route through the scenic Royal Gorge opened in the 1880s, but it didn’t take long for the city of Canon City to realize the possibility of creating a suspension bridge that would allow tourists and travelers to cross from one side of the gorge to the other. The federal government granted the land around the gorge to Canon City as a municipal park, and the first plans for implementing the bridge began. A suspension bridge consists of two tall towers connected by cables with many more cables attached to them, allowing for the towers to support the bulk of the bridge’s weight. Oregon fir planks make up the deck of the bridge, which spans the 1,260-foot gap of the gorge. The bridge contains no vertical trusses, and visitors can feel the swaying and shaking of the bridge as they journey 956 feet above the Arkansas River. Since 1929, tourists and travelers have experienced the Royal Gorge’s beauty from above.

Cirkelbroen Bridge, Copenhagen, Denmark | Photography by Anders Sune Berg: Once a center of maritime activity, Copenhagen’s harbor continues to teem with the houseboats and sailboats that define the unique life in the Christianshavn community. Cirkelbroen Bridge, designed by Studio Olafur Eliasson, strives to connect pedestrians with the area’s rich history of intimacy within the daily lives of those who live in the area. Inspired by fishing boats moored side by side in Iceland, the designer wanted to emulate walking from one boat to the next to cross the body of water. Consisting of five circular platforms that create one, larger circle that forms a pedestrian route around the harbor, the bridge allows cyclists, runners and walkers to see the beauty of the city from a new perspective. Studio Olafur Eliasson says that the zigzag design of the bridge contributes to speed reduction, which will hopefully help pedestrians slow down and appreciate the atmosphere of the vibrant city and improve the quality of life and development in a hospitable, inclusive community.

Schuman Bridge, Lyon, France | Photography by Guillaume Satre, courtesy of Explorations Architecture Paris: As the entryway into the historic center of the second-largest city in France, Lyon, the Schuman Bridge had to complement both the surrounding urban landscape and other existing bridges in the city. The Schuman Bridge was built between two of the oldest bridges in Lyon, the Masaryk and Barbe, both of which are also suspension structures. The main function of the new bridge was to bolster the infrastructure of traveling between the districts of Vaise and Serin after the doubling of the Croix-Rousse tunnel; however, it also helps relieve the Masaryk Bridge, which is intended to become a wholly pedestrian and cyclist path to promote eco-mobility. The Schuman Bridge’s sleek design has an open and unobtrusive view of the river to act as a beautiful avenue for transportation as well as a viewing platform for travelers, pedestrians and cyclists. The architects at Explorations Architecture Paris describe the structure as “slender, lightweight and transparent,” making it a continuation of the bustling city.